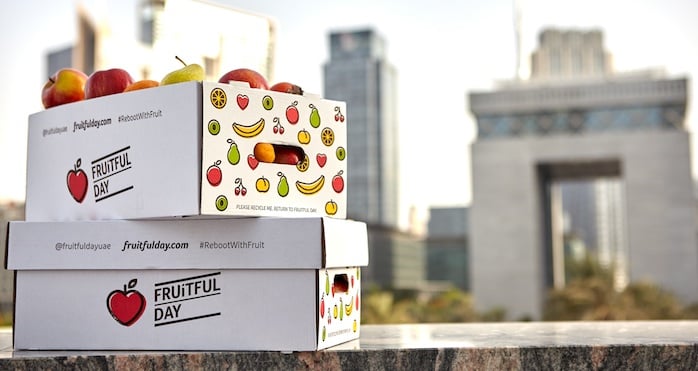 Around six to eight months ago Marie-Christine Luijckx sat down with two of her soon-to-be business partners and discussed a common problem.

All three of them came from a banking background and were used to being at the desk for long hours but healthy snacking options were proving hard to come by.

The idea sessions that followed led the group to approach Baker and Spice founder Yael Mejia with the hope of making unhealthy snacking in the office a thing of the past.

The idea? Fruitful Day, a fruit box delivery company designed to bring the freshest local produce to the workplace.

“We really had to think about things like how do you make the fruit easy to eat at a desk when you don’t necessarily have a pantry in the office,” reflects Luijckx.

“Then from the outside, it was figuring out the sourcing to make sure we could get the highest quality freshest fruit available in the boxes.”

The business is now headquartered in a warehouse in Dubai Investment Park and recruiting in preparation for its imminent official launch in September.

Among Fruitful Day’s key selling points is its locally produced fruit. Strategic advisor Mejia was key in this regard, helping the company source from local farms in the region through her contacts from the food and beverage industry.

As Luijckx explains, a surprising amount of fruit is produced in the Middle East and surrounding areas including white sweet apricots in Afghanistan, cherries and watermelons in Iran, peaches and melons in Jordan, nectarines in Lebanon and grapes in Saudi Arabia.

“Fruit has been here for thousands of years, it’s just that some of the farms here in the region aren’t as big as some of the global farmers,” she says.

Sourcing locally it is claimed means fresher fruit than you are likely to see on the supermarket shelves, where produce is shipped from as far away as the United States and New Zealand.

“If you’re buying an apple from the United States in the grocery stores it could be up to 10 months old. It was probably picked last year and then put in a cold room and stored,” she claims.

Luijckx sees the company’s role as partly helping people make better purchase decisions in this regard, offering in-region in-season fruit. A goal that has a particular resonance in the Gulf given the soaring rates of obesity and lifestyle diseases in the region due to bad eating habits.

“People are aware of growing diabetes and obesity rates, and are really starting to care about their health, and think about the choices they make but it’s not always easy. We feel our role is to help people make the right choices when time is limited.”

In recounting the Fruitful Day story to this point, Luijckx is full of praise for the Dubai small and medium enterprise scene. She particularly highlights the local support she has received, suggesting the company would not have “gotten off the ground” without it. A local SME, Emirati firm BioD Packing & Packaging has also provided the company with a solution to one of its problems – offering zipper bags that are biodegradable and compostable for its smaller produce.

Now, as Fruitful Day gears up for its launch this month, she says the firm has one clear goal for its first year of operation – growing a loyal customer base in Dubai.

“There are a lot of hardworking people looking for convenient healthy options and so in the first year our focus is really to grow our business here.”

Following this the company may look to other emirates, with Abu Dhabi a logical choice, and potentially other Gulf Cooperation Council countries in the future. Although there are no current
plans for any external funding.

Luijckx also admits Fruitful Day could broaden its focus, if there is enough interest outside of the office market.

“We’re already starting to get questions from families that are interested in having boxes delivered to them. We didn’t expect it quite so soon but I think it is some thing we’ll certainly consider. Being here in Dubai and being able to deliver anywhere in the emirate, I don’t see why it wouldn’t be feasible.”