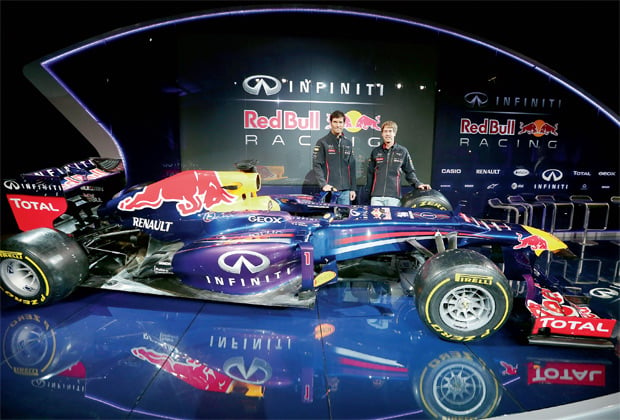 Infiniti Red Bull Racing has launched its car for the 2013 Formula One season, with a new purple livery to reflect the partnership between the two brands.

Red Bull, who won their third successive constructors title last year – with driver Sebastian Vettel picking up his third World Championship in a row – unveiled the RB9 at its factory headquarters in Milton Keynes, UK.

Infiniti, the Japanese automotive brand, was a sponsor of the team for the 2011 and 2012 seasons but in November last year the company announced a new four-year deal to become the team’s title partner.

“We were flirting before, and now we’re in a relationship,” said Simon Sproule, vice president and head of global marketing for Infiniti.

“Probably the most significant change is not the regulations, but the new Pirelli tyres,” he said at the launch.

“Pirelli have supplied us data about how the new tyres behave but past experience tells us that it’s only when we go testing that we really find out.”

Red Bull’s Australian driver Mark Webber was obviously happy to still be with the team after so long.

“The fact that this is my seventh season with the team is a massive advantage,” said Webber.

“I couldn’t have envisaged it when I joined and it’s hard to believe that you could be with the same Formula One team for seven years, as continuity is not always easy to achieve in this sport.”

The team’s three-time world champion Sebastian Vettel was in good spirits at the launch, showing glimpses of his renown humour.

“I’m very excited because this is the first time I’ve seen the car in one piece. I’ve seen little bits, but it looks very nice, so now we’ll get to see if it works as expected,” he said.

“I’m excited to get going again, to get back in the car, start testing and then go racing. Then, we’ll finally find out where we are.”

The partnership has already taken effect off the track with Infiniti positioning some of its engineers at Red Bull’s factory, while the company also recruited Sebastian Vettel to help design its latest premium model, the Infiniti FX Vettel Edition.