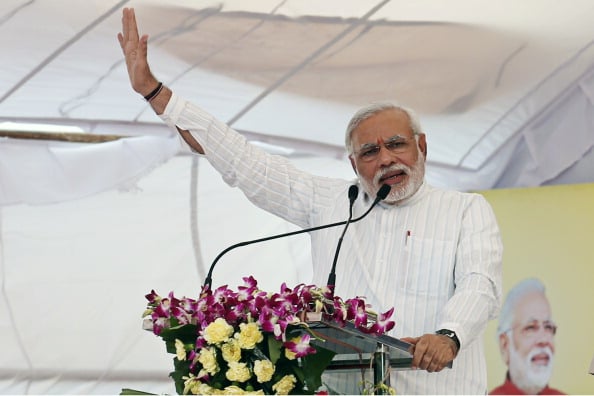 India’s Prime Minister Narendra Modi will pay his first official visit to the United Arab Emirates on August 16 and 17, it has been reported. The visit was confirmed by the Indian Community Welfare Committee, which is organising a grand reception for the Indian premier at Dubai Cricket Stadium, but the prime minister’s office has yet to provide official confirmation of the visit.

Unlike his predecessors, Modi has been fully engaged on the international political scene as he attempts to raise the profile of his country and champion India as a key location for foreign investment. Modi, whose Bharatiya Janata Party won a landslide victory in India last year, recently toured countries including the United States, Australia and Japan – successfully negotiating foreign direct investment deals with the governments in those countries.

A visit to the UAE and other Gulf countries, which are home to a large Indian diaspora, seemed to be in question after Modi announced plans to visit Israel earlier this year. Analysts had suggested that Modi’s closeness to Israel could put him at odds with the Gulf Cooperation Council. But it would appear that such diplomatic unease could be put aside as Modi and his counterparts in the GCC focus on building relations in order to boost trade and investment – especially between India and the UAE.

The UAE is already an important investor for India. According to figures revealed by India’s External Affairs Ministry, the country received $3bn in FDI from the UAE last year. In turn, India was also one of the top countries for FDI in Dubai in 2014 – according to official figures. Indians are also the biggest group of investors in Dubai’s real estate, with nationals having invested Dhs 7.8bn invested in the emirate’s property sector in the first half of 2015 alone.

Estimates suggest that trade between India and the UAE reached $60bn in 2014, making the UAE the third largest trading partner of India after China and the US.