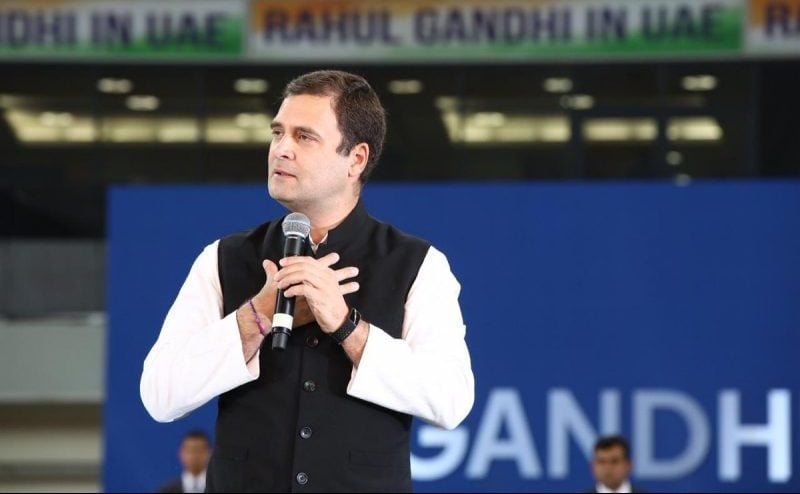 Indian politician Rahul Gandhi concluded his two-day visit to the UAE on Saturday after addressing students, workers and the supporters of his Indian National Congress (INC) party in the country.

“I am humbled by the love of the Indian community here in the UAE and their infectious enthusiasm and energy that helped make our visit a big success,” the opposition party president said on Twitter on Sunday.

I am humbled by the love of the Indian community here in the UAE & their infectious enthusiasm & energy that helped make our visit a big success. I want to thank all the volunteers from the Congress Party, IUML, KMCC & local organisations for their hard work. I salute you all! pic.twitter.com/Q80CXvoN0F

“This evening I had an excellent meeting with the Vice President and Prime Minister of UAE, the architect of modern Dubai,” Gandhi said on Twitter.

“The bonds between India and the UAE have stood the test of time. I am committed to helping build an even stronger relationship between our countries,” he added.

It was a pleasure to meet with Sultan bin Muhammad Al-Qasimi, the ruler of the Emirate of Sharjah. We had a cordial discussion that covered a range of issues. I look forward to working with him to strengthen the bonds between our countries. pic.twitter.com/UHCnmR6lMl

It was a pleasure to meet Sheikh Nahyan Bin Mubarak Al Nahyan in Abu Dhabi today, at the lunch he hosted for our delegation. He is a true friend of India & I look forward to working with him to strengthen the relationship between our countries. pic.twitter.com/nDWfwtWdFL

The Indian politician also met with businessmen in the UAE including GEMS founder and chairman Sunny Varkey and LuLu founder Yussuf Ali.

A big start to the day, Congress President @RahulGandhi and @sampitroda meet with business leaders at a breakfast hosted by Mr. Sunny Varkey. @INCOverseas #RahulGandhiInUAE pic.twitter.com/P2wknGvcnx

Addressing students, workers and other supporters of the Congress party during his visit, Gandhi asserted that “India’s diaspora needs to be utilised”.

“I am taking back the idea of tolerance, an Indian idea that has been attacked in our own country,” he said.

At the main public event in the Dubai International Cricket Stadium, where an estimated 50,000 people gathered, Gandhi said: “In the UAE we are celebrating the Year of Tolerance, while back home in India, there has been four-and-a-half years of intolerance.

He also hit out at Indian Prime Minister Narendra Modi, saying “India is facing a 14-year low with regard to investments. A couple of ill-advised economic policies like Demonetisation and GST has vitiated the atmosphere. We will put an end to the anger that has been spread by BJP.”

Mr. Modi is attacking the strength of India by strangling our institutions. We will start to do what Congress party has successfully done; put India on a economic path: Congress President @RahulGandhi#RahulGandhiPressMeet pic.twitter.com/UQR9ruadBD

He also pledged to help Indian workers in the UAE and offer them support during a visit to a labour accommodation in Jebel Ali.

“I know you leave your home to go abroad to work and you face many difficulties. You work the entire day and send money home. I have come here to tell you that we stand with you,” he said.

“We are ready to help. Whatever you need, whatever we can do to help you, we will. We want to talk to you.”

The visit is Gandhi’s first to the UAE after being elected as the Congress president in 2017.