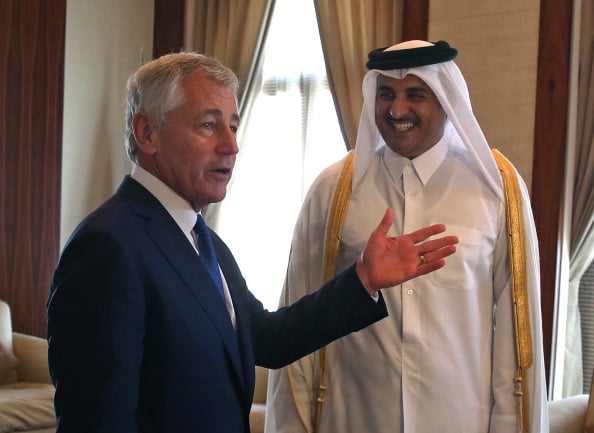 Hagel met with Qatari Emir Sheikh Tamim bin Hamad and Defence Minister Hamad bin Ali al-Attiyah on the last day of a visit to the region to reassure Gulf Arab allies of continuing U.S. support, despite disagreements over Washington’s policy toward Syria and its diplomatic overtures to Iran.

Hagel and al-Attiyah signed a 10-year Defence Cooperation Agreement that governs interaction between U.S. and Qatari forces and enables the continued assignment of American troops to installations in the area, including the Combined Air Operations Center at Al Udeid Air Base.

After signing the accord, Hagel visited the desert base and toured the computer-lined watch floor at the sensitive facility, where troops from 30 nations coordinate military air activity in the region on huge computerized maps showing the Middle East, the Gulf and Afghanistan.

“There is no facility like this truly in the world,” Hagel told troops later. “With the technology, the expertise, the leadership, all integrated into almost 30 nations’ capacities. That’s a huge, huge accomplishment.”

U.S. officials have long been reluctant to identify the base and its location, in part because of host-nation concerns, but they said the base is evidence of U.S. commitment to security in the region at a time when Gulf Arab states are seeking reassurance.

Hagel’s visit to the base capped a six-day tour of the region that aimed to underscore the depth of the U.S. commitment to security and stability in the volatile Gulf.

Hagel spoke to Gulf Arab allies at the Manama Dialogue regional security forum in Bahrain last week and used his speech to the conference to address concerns about negotiations with Iran over its nuclear program and U.S. reluctance to back rebel groups seeking to oust Syrian President Bashar al-Assad.

Hagel noted that while the United States is emphasizing diplomacy in regional conflicts, its efforts are backed up by a fierce array of warplanes, ships, tanks, artillery and about 35,000 troops in and around the Middle East.

He also pointed to the many U.S. military facilities in the region, including Fifth Fleet headquarters in Bahrain and the Combined Air Operations Center.

Hagel met with Crown Prince Salman bin Abdulaziz al Saud, the Saudi defence minister, during a brief stop in the kingdom on Monday evening, assuring him Washington was committed to keeping Iran from acquiring a nuclear weapon, a spokesman said.

Hagel told reporters at Al Udeid Air Base that he spoke with Qatari leaders about international efforts to destroy Syria’s chemical weapons and the reasons Washington was focused on narrowly supporting the moderate Syrian opposition.

As the war in Syria drags on, forces loyal to Assad have taken control of a highway needed to extract hundreds of tonnes of toxic chemicals that could be destroyed by the United States under a deal brokered by Washington and Moscow, Syrian state television said on Monday.

While divided world powers continue to try to bring rebels and Syria’s government together for talks, Islamist militants appear to be gaining ever more momentum in relation to moderate forces backed by the West.

Gulf Arab states, notably Saudi Arabia and Qatar, have been arming and helping rebel groups, though the extent of foreign influence over a constantly evolving rebel landscape is unclear.