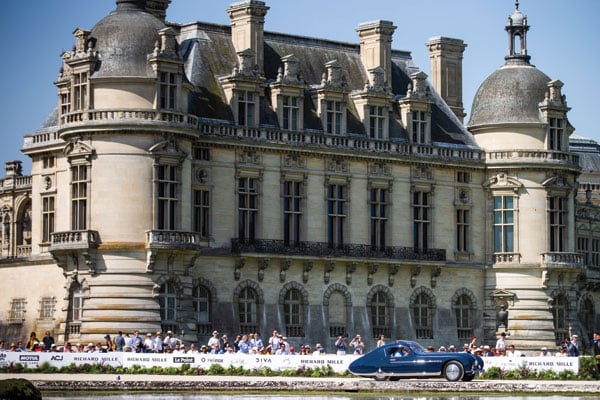 It has become known to chic Parisians as the more discreet version of the Palace of Versailles. And in recent years, the moneyed upper-crust of Parisian society has been quietly absconding on weekends to this serene hamlet, 40 minutes outside of the city, where they indulge in pursuits of French nobility such as polo, horse racing and spa treatments at France’s lesser known chateaux, Domaine de Chantilly.

But it is precisely this air of exclusivity, buoyed by Michelin-starred gastronomy and priceless art collections, that has crowned Chantilly as the destination of choice to host the world’s most elegant automotive competition.

The Chantilly Arts & Elegance: Richard Mille 2019 event welcomed 18,000 visitors this year as patrons and collectors enjoyed a weekend-long festival that showcased the crème-de-la-creme of the automotive industry. On display were one-off concept supercars, individually worth millions of dollars, along with some of the most graceful and valuable classic cars in existence. 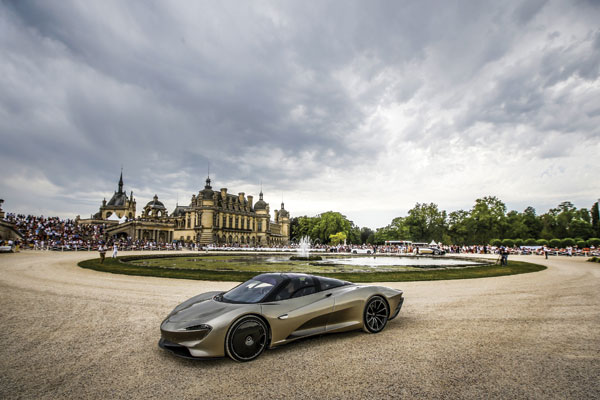 As France sweltered under its most significant heatwave in history last month, the event provided compelling entertainment for car enthusiasts with its Montefontaine track supercar rally, a Bonham’s auction of classic cars, a celebrity-strewn gala dinner held in the great hall of the architectural masterpiece, Grandes Ecuries de Chantilly, and the Concours d’Elegance competition itself (the McLaren Speedtail took home Best in Show). VIPs were bestowed with corporate hospitality fit for a king, private supercar drives and elegant soirees. The unveiling of the world’s most expensive new car – Bugatti’s $12.3m La Voiture Noire – set the tone for the type of investor this event attracts. The one-off model was already sold before it finished its show-stopping final lap of the Concours. Such is the power of the Arts & Elegance event.

Along with its supercar credentials, some of the rarefied models on display included the McLaren P1 GTR and 720s and Ferrrai’s LaFerrari, Enzo and 288 GTO models. Scarcity, and its inherent value, are perhaps at the heart of the true connection between the event, which was established in 2014 and now runs every two years, and its namesake Richard Mille.

With an average entry-level price of $150,000 for a Richard Mille timepiece, the average annual income of a customer sits around $30m. Those are significant numbers when considering most of the brand’s customers are still in their thirties.

It’s a hyper privileged bubble that allows a customer to sit down to a Michelin-prepared gala dinner of theatrical proportions in the company of world-renowned actress and brand ambassador Margot Robbie, or join the unveiling of an unprecedented exhibition of ‘The Nude Mona Lisa’ at the Musee Conde, but this is the world of Richard Mille.

It has been almost two decades since Mille launched the brand with his partner Dominique Guenat, revolutionizing the sector with their unique movement concept with a bold aesthetic design – unrivalled to this day.

Despite the global economic challenges facing the high-volume luxury sector, business is thriving for the brand worldwide, particularly in the Middle East which represents a significant portion of the market. The key has always been scarcity. 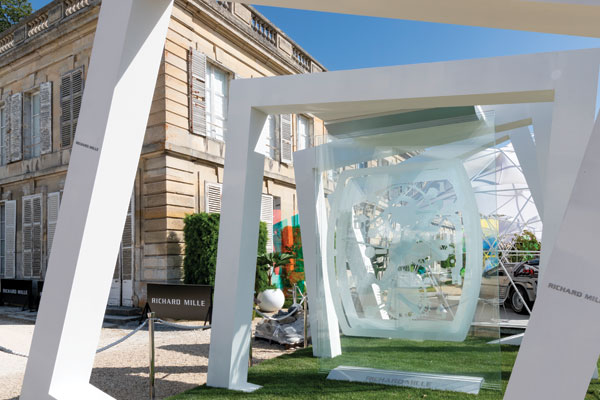 Only 38,000 Richard Mille pieces have ever been made with some editions limited to just eight. This year, despite growing demand, the brand plans to make only 5,200 more. Long wait lists are de rigueur.

During the closing private cocktail party at the Arts & Elegance event, Mille himself drifts casually amongst guests as an artistically dishevelled DJ spins modern French soul (perfectly appropriate given the demographic), and the early summer sun sets late in the sky. ‘Welcome, friends, and thank you for sharing the weekend with us,’ he humbly offers with a warm embrace or handshake to his guests, whether he knows them personally or not, before quietly disappearing in to the not-yet-navy night.

One gets the impression that understanding desire is everything with Richard Mille: the art of choosing the pinnacle of the evening and leaving just before; of engaging in courtesy and conversation and leaving you both charmed but also secretly wishing for just a little more.

Like a timepiece so limited, the wait is worth it, and the price worth paying for.

Most memorable cars at the Chantilly Arts & Elegance Richard Mille 2019

The McLaren Speedtail is the modern reincarnation of the legendary McLaren F1. It comes with three seats and will be the model with the highest top speed of 403kph.

Part of a recreation of the brand’s most significant and stylish cars of the past.

A continuation of the concept introduced with the BMW i8, the small combustion engine is combined with a battery-powered electric drivetrain. It features laser-wire technology on its headlights.

A Ferrari SP1 and SP2 merged into one. The controversial concept includes an electric drivetrain and autonomous functionality.

A full autonomous luxury car, it features interiors with a combination of wood, leather and marble.

This one-off is the world’s most expensive new car with a price tag of $12.5m, excluding taxes. Design highlights include an elegant side silhouette with aggressive rear styling.