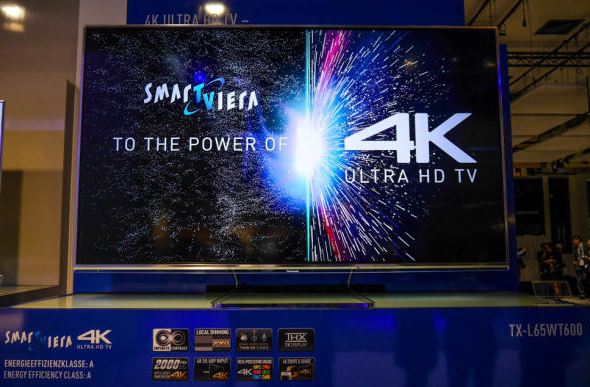 Europe’s largest tech and gizmo showcase, IFA, opened its doors to the media in Berlin, Germany, on Tuesday.

Guests are set to witness world-first announcements that could make or break global tech giants in the tight race for consumer affections.

The expo kicked off with Panasonic’s announcement of its new slogan ‘A Better Life, A Better World’ – a nod to the firm’s increased focus on B2B activity. Panasonic also unveiled its range of cloud-connected TVs, including the world’s first Ultra HD television.

The new Panasonic Smart Viera WT600 TV can provide 4K playback. The 65-inch TV is also the first ever television to use the HDMI 2.0 connection. This means it will reach playback of up to 60 frames per second ­­– double the previous high-speed connection record. The Viera WT600 has a 60p-capable display port.

The WT600 also has a built-in HTML 5 web browser for net surfing. With a built-in 4K H.264 decoder, users can play 4K content directly from USB and SD cards, as well as straight off the web.

As the Japanese electronics firm smarts from $15 billion losses over the last two financial years, the company has also released a range of market-first tablets as part of a global growth strategy. Its new enormous 20-inch 4K tablet drew attention from the crowds with its sharp Apple-beating resolution.

The firm announced yesterday it would be folding its consumer smartphone business. Panasonic is one of several handset makers caught out by the meteoric rise of the two dominant smartphone makers – Samsung and Apple.

In another world first, Sony presented the Xperia Z1, a new premium waterproof smartphone. The Xperia Z1 Android smartphone will boast a 20-megapixel camera against the 8-megapixel iPhone 5 and 13-megapixel Samsung Galaxy S4.

The phone also works in conjunction with the Sony SmartWatch2, which can be used as a second screen for Xperia Z1. The watch allows the user to read messages, handle calls, access notifications and trigger the camera shutter – all from the wrist.

Sony also presented its Vaio Fit Multi-Flip laptoprange, which blends laptop and tablet skills. The Windows 8 PC screen flipsaround completely to be used as a flat touchscreen tablet on the go.

Gitex, the Middle East’s largest technology showcase, will open in Dubai from 20-24 October 2013 at the Dubai World Trade Centre.