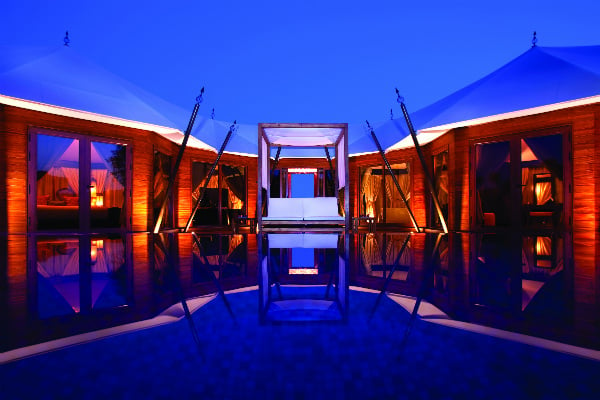 Some hotels are just that, functional places with a room and facilities. No matter what level of luxury is involved the opportunities to explore are often limited to spas, gyms, restaurants, bars and pools. The Banyan Tree Al Wadi, in Ras Al-Khaimah, is no such place. It is not so much a hotel as a life experience.

Imagine waking up in a tented Arabesque villa to your own private pool, which overlooks a 500-hectare nature reserve in the middle of the desert – complete with its own watering hole. Oryx, gazelles, camels and birds flourish and feed before your eyes on the vegetation dotted along the endless sand dunes. Peace and tranquillity is all around, punctuated only by the sounds of nature. And in the evening, you can sit under the stars to take in the crystal clear night sky.

If you are lucky, you might even see a shooting star. This is what sets the Banyan Tree apart from its iconic hotel peers. It is about the ‘get away from it all’ experience. The immersive element makes a welcome change from those establishments simply focussed on a design aesthetic or food and beverage offering built around gold leaf and truffles. Although, that being said, the design and F&B at the Banyan Tree are still something to behold.

Built six years ago as part of an international chain, the Al Wadi hotel (and its sister establishment with 32 villas at the RAK beach resort 20 kilometres away, which Al Wadi guests can catch a complimentary shuttle to seven times a day) quickly became synonymous with the emirate. The authenticity of the desert experience – including falconry, archery,

fishing, nature walks, stargazing and horse riding – has attracted many locals. Tellingly, some 50 per cent of guests are Emiratis or Gulf Cooperation Council nationals with Germans, Chinese, Indians, Scandinavians and Brits being among the other loyal visitors. In fact, the staff claim that many guests return again and again – often requesting their favourite of the 101 villas on offer at Al Wadi.

Of course, this includes celebrity names – ranging from Bollywood stars to top European footballers – according to the staff, not to mention frequent visits from Middle Eastern royal families. Regional corporate giants also use the sterling facilities for conferences. And weddings are big business too given the romantic landscape. If word gets out, the global market is likely to engage even more so although the limited number of villas – with no expansion plans in place – restricts the number of guests able to enjoy this natural desert oasis.

Navigation around the surprisingly green, and expansive, site is also fun. Bicycles are provided for those wanting some exercise. For the less active among us, three buggy drivers operate at all times to ferry guests around. Just two restaurants, Al Waha (Arabic cuisine) and Safran (Thai food), are on offer. However, guests can also dine outside with their own private chef in a number of locations including the top of one of the picturesque forts, on the sand dunes or in the scenic barbeque areas.

Meanwhile, the Samar Lounge offers everything from cocktails to cigars. In addition, the Moon Bar allows you to sit and smoke shisha under the stars. Other attractions include the Rainforest Spa with its 14 different steam rooms, saunas, showers and hydro pools plus an extensive range of treatments and massages. This really is a great place to pamper yourself. You can even take a yoga class in your villa (villa sizes range from 150 to 250 square metres) or by your pool, or play some snooker in the calming resort library.

In terms of the staff, guests can expect first-class service. There is a ratio of 2.5 staff for every villa. Given the exclusivity of the resort in terms of the relatively small number of villas and restaurants, you will find the same faces providing service again and again. This is a refreshing change when compared to the faceless mega hotels with hundreds and hundreds of rooms. As general manager Axel Jarosch says, it is all about “a personalised service” in an intimate setting.

Indeed, there is something quite magical about the Banyan Tree. At the moment, it is entirely unique as a concept. As more and more of the desert is developed in the UAE, let us hope it stays that way rather than being spoiled by urban sprawl. This pearl of Arabia should be protected. For after all, it is much more than just another hotel. It is a place to escape from the pressures of the modern world.

Firstly – is the hotel considered to be the market leader in RAK, do you expect the competitors to raise their game in the coming years given that the emirate is developing fast and how will you stay ahead of the pack

“We are the market leader here. And another 4,000 rooms will come online within the next five years in RAK. But we look forward to more high-end luxury competition within the emirate. However, nothing will ever compare to us unless somebody builds another tented villa-style resort and that is not in the plan. As long as we are constantly improving our facilities and reaching out to new markets, there will be growth.

“We know that RAK was one of the only emirates to see growth in the tourism sector in 2015, up 6 per cent on the year before with 750,000 room nights. The target for RAK is to achieve more than a million visitors a year within the next five years. This will assist us, we can only benefit from it.”

Is there a company motto, ethos or set of guidelines – the DNA running through the organisation?

“For us, it is not about selling accommodation but selling an experience. We want the guest to leave the resort with a story to tell. That is what makes us stand out from a hotel in a city centre or normal resort. It’s about personalising the stay of the guests, that’s what we excel at.”

What is the national make-up of your hotel guests?

“Roughly 50 per cent are from within the UAE. We are also strong in terms of guests coming from Qatar and Kuwait. The others are expats within the UAE, Germans, the British and a growing percentage coming from China. We have also noticed an increase in the number of people coming from India as well as Scandinavia. We were never really strong on the Russian and CIS market because we don’t have the big shopping malls or nightclubs. Our guests come to escape and relax, to disconnect from the world.”

How is that likely to change in the future with geopolitical and economic shifts – the expansion of a wealthy Chinese population, the currency crisis in Russia, economic decline in Europe and the low oil price in the Middle East, for example?

“We haven’t seen a significant change really. The Germans will always travel. We have seen a slight drop in the UK market. But we still see huge potential in the Chinese market, as we have a good brand presence there given that we have 16 hotels in China.”

What was the average occupancy rate here across the last year and how does it compare to industry norms?

“It was around 55 per cent at Al Wadi and 63 per cent at the beach resort. You cannot compare us to a beachfront hotel in Dubai or a city centre resort in Abu Dhabi. The guests who come to us will have done their research and they come here for a reason. They don’t want a cookie cutter style vacation, they want something different.”

You started out as a waiter. How would you describe your own management style as a GM now?

“I worked my way up through being very hands-on. I actually do not like sitting in an office. This morning, for example, I was driving guests around the resort on a buggy. I like interacting with the guests and supporting the team by showing them I know where the challenges are.

“I like to lead by example. The back-to-the-floor approach is what hospitality is all about. Yes, we are all business people and we are driven by the bottom line. We have a responsibility to provide a return on investment but you can only do that if you have happy guests.”

How important has F&B become to the hotel industry as a whole and what specific strategy are you deploying here – many high-end hotels now opt for celebrity chefs so that they can put their name up in lights and garner extra publicity? Are you doing things differently here?

“A lot of the hotels bring in the big Michelin star names but the restaurants are managed by a third party representing that chef. We are all about finding out what the guest wants and catering for that. Do I need that celebrity chef? Probably not.”

I know you are unable to reveal revenue and profit numbers but is the hotel profitable?

“We are profitable with a margin averaging between 30 and 40 per cent across the two resorts.”

Can you set out just what makes the Banyan Tree an icon – is it on a par with the likes of Emirates Palace in Abu Dhabi or the Burj Al Arab in Dubai in terms of being a centrepiece that draws in people both locally and globally, and puts RAK on the map?

“Well, it is definitely an icon. If you compare us to other destinations, we offer much greater privacy and true integration of the guests into a live nature reserve. In other desert resorts, for example, there is no vegetation or wildlife. Here in RAK you have the desert, the mountains and the sea. All this makes us stand out from the rest. We are the calling card of the emirate. Any article about RAK always runs with Banyan Tree images. On top of that, we are just 40 minutes away from the airport.”

Where is your favourite spot to spend time in the hotel and why?

“I love to join guests on the nature walks where the guide explains the different tracks of the animals and pinpoints the indigenous tress as well as how much the falcons mean to Emirati culture. It’s a special place to be.”

Finally, the role of a general manager is hugely important. That person guides the hotel almost like a captain of a ship. How much room is there to be creative though when the hotel is part of a chain, do you have autonomy to stamp your own personality on the premises?

“As long as you abide by the fundamental Banyan Tree principles, you can do pretty much what you want. Guest satisfaction and happy staff are the most important things. If you have that, it is a solid foundation to build on. I’m coming up to two years here and my focus has been on the attention to detail. Things like me personally meeting guests on arrival when it’s possible. Without our guests, none of us would have a job so our priority is to deliver on their individual wishes.”