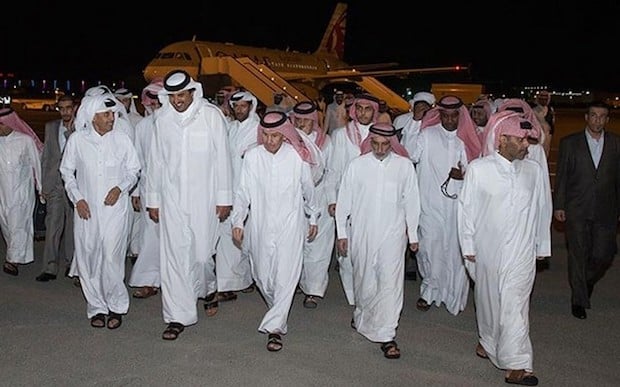 Twenty-six Qataris, including members of the Gulf state’s ruling royal family and two Saudis, were freed on Friday after being kidnapped and held in Iraq for nearly a year and a half, Qatari officials said.

Qatar-based Al Jazeera television showed Qatar’s Emir Sheikh Hamad bin Khalifa al-Thani greeting the men with hugs as they arrived in Doha on Friday on a private jet from Baghdad.

Their release was a boost for tiny Qatar which has used its influence to free foreign hostages in war zones but was alarmed when 26 of its own citizens were seized by unidentified gunmen in 2015 while hunting in southern Iraq.

Their abduction in territory dominated by militias aligned with neighbouring Shi’ite power Iran led to long negotiations among Qatar, Iran and the Lebanese Shi’ite group Hezbollah, according to an Arab diplomat in Doha.

A Qatari official said the hostages’ release was linked to a major evacuation of Syrian civilians and fighters from four besieged towns completed on Friday.

The complexity of the talks and the many players involved highlights Qatar’s continued role as a mediator and a potential broker of deals in Syria’s six-year conflict.

In Riyadh, the Saudi foreign ministry said the two Saudi hostages landed there on a private jet late on Friday.

“They are all in good health and they all left the Iraqi capital this afternoon,” the ministry said, according to the Saudi state news agency SPA.

The group was kidnapped Dec. 16, 2015 from a desert hunting camp in southern Iraq by dozens of armed men in pickup trucks.

A Qatari royal and a Pakistani man were freed last year.

No one has claimed responsibility for the abduction of the hunters, who were seized near a Saudi border area dominated by Shi’ite militias who have accused Doha of meddling in Iraq’s affairs.

Some Iraqis, especially in the Shi’ite-majority south, are critical of Qatar’s stance in the Syrian civil war and accuse it of complicity in the rise of Sunni Islamist militants.

It had called on Iraq to take the lead in freeing the hostages, who had been granted permits by Baghdad to hunt in the area. Iraq’s interior ministry said the hunters had failed to heed government instructions to stay within secured areas.

Hunters from rich Gulf states travel to Iraq’s desert in the winter months to buy falcons and hunt the rare houbara bustard, a bird whose meat is highly prized.