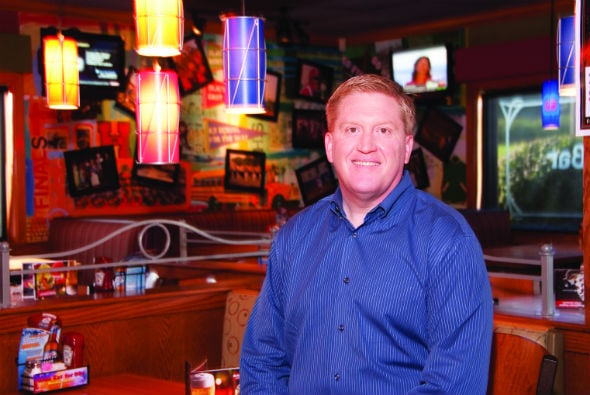 After spending an age battling Dubai’s crawling traffic on a Thursday afternoon, I finally reached the Applebee’s restaurant on Sheikh Zayed Road.

If I’m honest, I expected to find an empty venue seeing as it was after the lunchtime rush. But the moment I opened the door, I was assaulted by a cacophony of loud sizzling dishes and noisy chatter.

Walking through the crowded tables, I sat down for a chat with Mike Archer, president of Applebee’s, who says he’s been to the Middle East three times in the last five years.

“This last week, I have eaten at an Applebee’s at least 15 times,” he laughingly confides to me. But then he would say that.

The Kansas brand, founded nearly three decades ago, claims to be the largest casual-dining chain in the world operating over 2,000 restaurants and employing approximately 28,000 staff.

Applebee’s entered the Middle East in 2001, and now the region is the franchise-operated brand’s second biggest market outside the US, after Mexico.

“Our first restaurant in Egypt recently opened, and there are four more openings in the pipeline for the next six months,” says Archer.

“We expect to add a total of eight to 10 new restaurants between now and the end of 2014 across Saudi Arabia, Kuwait, Qatar, Egypt and the UAE.”

With five new restaurants in the UAE alone, the company aims to create around 350 to 500 job opportunities.

“We generate a great number of direct and indirect jobs every time we open a new restaurant. Not only are there job opportunities for people working within the restaurant itself, but also within our construction companies, food suppliers, warehousing companies and head office support staff,” elaborates Archer.

But Applebee’s is not the only US firm eyeing regional opportunities. The Middle East’s F&B industry is booming and a flood of international restaurant brands such as Cheesecake Factory and IHOP have debuted into the market in the last year.

But Archer is unfazed by competition, acknowledging that fierce rivals exist around the world.

“To beat competition, you just have to be better. Since we have been in the region since 2001, we have had the opportunity to establish the brand,” he adds.

One thing that really helps to maintain the firm’s competitive edge is Applebee’s partners in the region, Archer says.

“They really understand the region and make sure that we take this American brand and bring it to life in multiple cultures and hence form a significant proportion of our success.”

Another factor that has helped the brand is its menu – which, according to Archer, caters to local tastes, but remains loyal to its US roots.

“The core products in our menu are consistent between here and the US, so if you order a quesadilla burger, it tastes the same anywhere in the world.

“The only differentiator here is that all the food is 100 per cent halal and no alcohol is used in the sauce.

“But we also do have customisation, so the ‘Steak and Lobsters’ dish is only served here,” he explains, pointing to the menu.

The brand is all about localisation and creating a “neighbourhood” experience for customers, says Archer. When not jet-setting around the world, the CEO prefers to see first-hand if Applebee’s is delivering its promise.

“I’m in one of our restaurants multiple times a week. People in the restaurant business are junkies for immediate gratification, so when customers walk out and we see a smile on their faces, we feel great that we have made their day a bit brighter.”