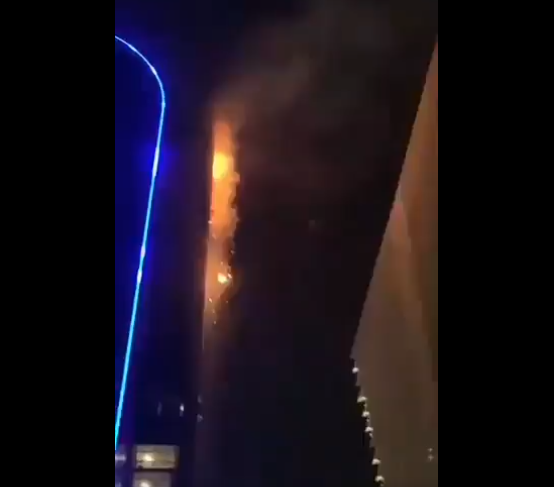 More than 300 residents of the Duja Tower in Dubai have moved back into their homes after a fire broke out in the building on Thursday night.

The tower has been declared as safe and habitable by the Dubai Civil Defence, the tower’s developer Nasser Lootah Real Estate said in a statement.

The company said it assigned a team of fire and maintenance contractors to evaluate each affected apartment before granting access to the tenants.

Fire sprinklers and alarm systems have also been inspected and rectified in these apartments.

“Six of the 12 elevators have been restored and work is ongoing at an accelerated pace to restore the remaining elevators on a priority basis,” it said.

Residents affected by the incident have also been provided with week-long accommodation in nearby hotels.

“Upon reassessing the situation in a week, appropriate steps, agreeable by the management and the residents, will be taken,” the statement said.

#BREAKING : A major fire has broken out in #DujaTower in on #SheikhZayed Road #Dubai . The tower opposite the World Trade Centre #WTC and #BurjKhalifa. Dubai Civil Defence is extinguishing the fire and evacuated all residents, no injuries have been reported. pic.twitter.com/E915mkRjVH

The Dubai Municipality has also certified that the structure of the tower, which has 670 residential apartments and 20 commercial units, has not been affected due to the fire.

Riyadh Davids, general manager of Nasser Lootah Real Estate, said: “On behalf of the owners and management of Duja Towers, we thank our residents for their patience as we faced the crisis together. Their support enabled us to facilitate their moving into the apartments within 36 hours of the incident. We will continue to stand by our tenants and offer support.

“We are extremely thankful to the Dubai Civil Defence for their promptness and professionalism, whereby the fire was contained to just one area of the building.”

A thorough investigation into the incident is still underway.