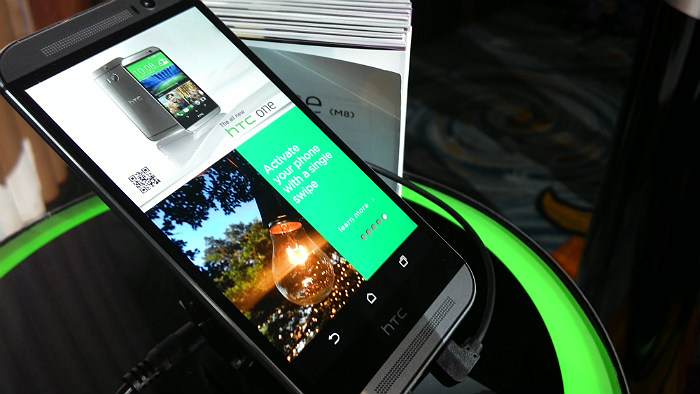 Phone manufacturer HTC unveiled its latest smartphone the HTC One (M8) in Dubai on Wednesday, and announced that the device will be available for sale across the UAE and Saudi Arabia from Friday, April 4.

Nikitas Glykas, executive director, HTC MEA described the device as a “premium product, such as an expensive watch or a fine piece of jewellery.”

The phone, almost 90 per cent metal, features a 5-inch, full HD (1080p) display and a Super LCD3 touch screen with Gorilla Glass 3. It comes with HTC’s new interface — Sense 6 and is supported by the Qualcomm Snapdragon 801 2.3 GHz quad-core processor.

It runs on Android 4.4, KitKat and comes with 2GB of RAM and 16/32GB internal storage capacity. The M8 also introduces a micro SD slot, which its predecessor, the HTC One, lacked.

A lot of focus has gone into the phone’s camera capabilities. Dubbed by HTC as the “best phone to take selfies”, the M8 includes a 5MP front facing wide-angle camera, along with an ultrapixel duo-camera at the rear. It also comes with a dual flash, full HD video recording, and photo editing features such as UFocus, Dimension Plus, Seasons, Foregrounder and Image match.

During the launch, HTC also announced that it would launch a unique ‘real-gold’ edition of the M8 in the Middle East. The model is expected to be launched by the end of the April/early May, said officials, refusing to disclose the price. “It will be very expensive,” said Phil Blair, president of HTC EMEA.

The region will have “global exclusivity” to the gold model for the first few weeks after the launch, he confirmed.

HTC faces stiff competition from players such as Apple and Samsung in the region, but Blair said the company was confident about increasing marketshare and that it would invest heavily in marketing the new M8 across the region.