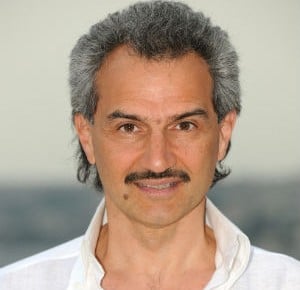 The Saudi prince, with a personal fortune of around $18 billion, is the 29th richest man in the world, according to Forbes. The nephew of King Abdullah of Saudi Arabia, the 57-year-old is the chairman and founder of Kingdom Holding Company, a diversified investment company.

Prince Alwaleed, who acquired a $300 million stake in social networking site Twitter last year, is all set to launch a new Arabic news channel, Alarab, which he claims will be “evolutionary.”

Kingdom Holding, which has shares in NewsCorp, Citibank and Apple, is also constructing what is soon to become the world’s tallest building, the Kingdom Tower in Jeddah.

The Saudi billionaire has been very vocal about women’s reforms in the Kingdom and employs a large number of women in all his companies and associated entities.

He has also pushed for a quick resolution to the rising problem of unemployment in the country.

Make philanthropy a part of life

Through his Alwaleed Bin Talal Foundation, the prince donates generously to humanitarian causes around the world. Speaking to Gulf Business earlier this year, he said that charity was integral to his life.

“In my case, philanthropy is not a choice; it’s a pillar of Islam. Zakat [giving charity] is a part of my religion. So it’s not debatable or negotiable.”