To understand the sheer standing of the Dubai International Boat Show (DIBS) on a global stage, you need only have had to take a short stroll along the Superyacht Avenue at the 28th edition of the show. Held at Dubai Harbour last month, within a few paces you’d walk past creations from some of the world’s largest yacht builders including Sanlorenzo, Ferretti, Gulf Craft, Azimut, Princess Yachts, Lürssen, Oceanco and Benetti, among many others.

The five-day show organised by the Dubai World Trade Centre (DWTC) from March 9-13, had a new base at Dubai Harbour this year — a significant upgrade considering that the location has 700 berths and, more importantly, can host vessels up to 160 metres in length.

According to data shared by DIBS, the MENA region is home to 12.6 per cent of the global superyachts, the world’s second-highest fleet-to-billionaire ratio. “DIBS is an important gateway to a region that not only has a population with significant purchasing power and appetite for large yachts, but is also seeing some of the most ambitious and exciting coastal development projects in the world. Visitors from countries like Saudi Arabia and the Maldives are an important part of the DIBS visitor profile for Triton,” says Craig Barnett,  director of sales and marketing Triton Submarines. At the show, it launched a new collaboration with Shadowcat for a compact launch and recovery vessel packaged with a Triton 3300/3 MKII submersible.

Amplifying Barnett’s thoughts about the show is Mohammed Hussein Alshaali, chairman of Gulf Craft, UAE’s homegrown yacht manufacturer. The show witnessed the firm kicking off its 40th-anniversary celebrations that saw the launch of the Nomad 70 SUV and the Silvercat 40cc. It also announced the Majesty 111 concept, while its Majesty 120 made its show debut too. Gulf Craft was among the largest exhibitors at the show with 14 vessels on display from its Majesty Yachts, Nomad, Oryx Sports Cruiser, and Silvercraft brands.

“The Dubai International Boat Show is today recognised as one of the three most influential yacht shows in the world,” says Alshaali. “It is our ‘home show’ which we have been a long-standing supporter of since its very first edition in 1992. It is an important event, not only for us as a brand but also for the global yachting industry as a whole. It puts a spotlight on the UAE showcasing not only what the country offers in terms of marine lifestyle, but also the government’s efforts to position Dubai as a global yachting tourism destination.” Significantly, Dubai’s maritime sector is reported to account for Dhs26.9bn of the emirate’s GDP.

With a total of 34 launches and exhibitors from 54 countries at DIBS 2022, it featured over 800 global brands. The appeal of the show lay not only in its location, but in the calibre of the audience that it drew. “The Middle East is one of the most important global markets due not only to the area’s solid economic growth but also to the strategic value of shipyards aiming to make an impact on the international nautical stage,” says a spokesperson for Italian yacht-manufacturing company, Azimut. Azimut showed up with three of its major boats: Grande 27Meters, Grande 32Meters and Azimut 78. “This importance is reflected in sales, with Azimut seeing a growth of 47 per cent in three years in the Middle East, which now accounts for 25 per cent of the company’s market.”

A marine lifestyle
Beyond the yachts themselves, there were other major developments that came through the show. Among these were four UAE residents and members of The Arabian Ocean Rowing Team who announced plans to cross the Atlantic Ocean — a 5,000km journey from La Gomera to the English Harbour in Antigua — unassisted in a 45-60 day journey that they will undertake this December.

Also, the day before the show began, the Middle East Yachting Conference was held as a prelude to DIBS, with pertinent topics such as the empowerment of women in the yachting industry, the role of cryptocurrency in the industry and also the threat of cyberattacks on superyachts.

A big focus though, and one that resonated through the show, was the topic of sustainability. A flying boat called X-Pearl that uses a hybrid hydrogen-electric propulsion system, designed by French firm SeaBubbles, was unveiled during the event. SeaBubbles signed an MoU at DIBS with Al Masaood Power Division to manufacture these zero-emission vessels that can seat up to 12 passengers and can serve as water taxis. Also, Sunreef Yachts showcased its electric propulsion technology via its Sunreef80 Eco vessel, whereas Faro Boats’ 5 Solar Set was positioned as the world’s first maritime set to integrate a 100 per cent sustainable electric boat and a solar-charging dock. Dutch shipbuilder Feadship meanwhile used the show to highlight its 268-metre concept, Pure, which will have a clean propulsion system.

Despite the overall upbeat sentiment at the show, the challenges that the maritime and yacht building industry faces were not overlooked. A consensus among several of the participants were supply chain challenges, exacerbated by the Covid-19 pandemic. “The pandemic undoubtedly affected the entire global supply chain,” says Gulf Craft’s Alshaali. “For us, the shortage certainly did have an impact on our production timelines as we import a lot of raw material from across the globe, manufacture our boats, and then export the finished product to the world.” 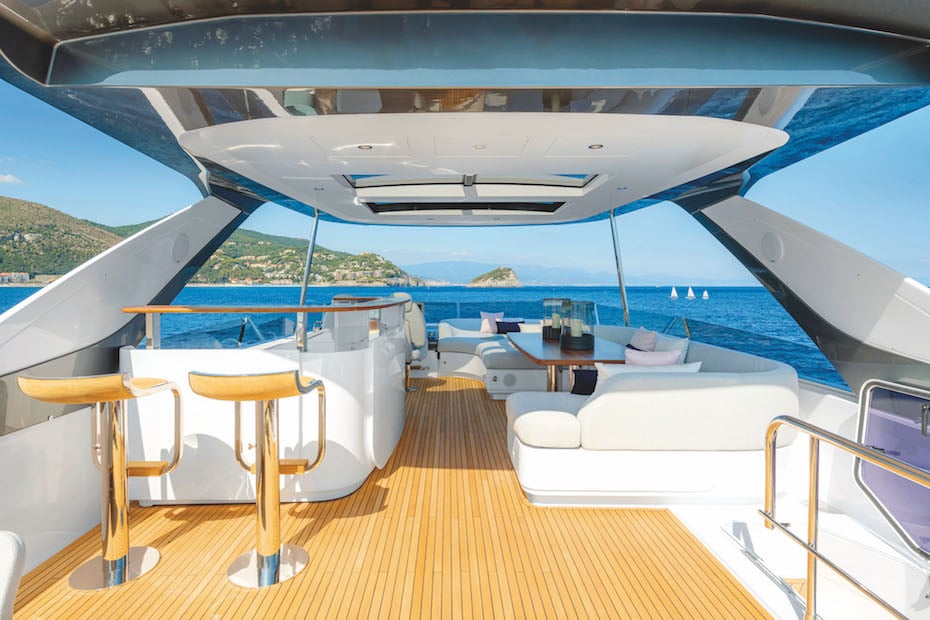 Triton’s Barnett adds that geopolitical machinations only further added to the industry’s woes. “After the inevitable Covid-related slump the large-yacht sector bounced back with record figures in 2022. Unfortunately, the current crisis in Ukraine could prove to have a cooling effect for two reasons: from a confidence perspective amongst UHNWIs on the near future of the geopolitical landscape, plus overall inflation and oil prices pushing up costs (already higher due to Covid) amongst vendors in our supply chain,” he adds.

Speaking just ahead of the show, Trixie LohMirmand, executive vice president, Events Management at DWTC, noted that the industry has somehow found a way to push through its obvious obstacles. “The challenges of the last two years have sparked a desire for a more outdoor, spatial lifestyle, which in turn promise new growth opportunities for the industry. The leisure marine sector has continued to thrive in this period, while building on its ability to attract a wider and more diverse buyer base,” notes LohMirmand.

Despite the headwinds, the industry is reporting record figures. Triton said that it has posted its best sales year ever in 2021, and Alshaali says that for Gulf Craft too, last year was “a record-breaking year” in terms of sales. “The US market, which we entered three years ago, and registered strong performance in 2021, will be a key focus with the Majesty and Oryx brands. Along with the US, we are also setting our sights on further growth in 2022 with increased presence and expanded sales channels in Saudi Arabia and Australia,” confirms Alshaali.

Regionally, the countries within the Middle East are expected to be increasingly lucrative for global industry players. “The Middle East represents an important growth for Azimut, with enormous potential for further development with a specific focus on Saudi Arabia which is seen as a market with excellent growth prospect and opportunities for a possible expansion,” observes Azimut’s spokesperson.

The tailwinds are definitely in the right direction for the industry.