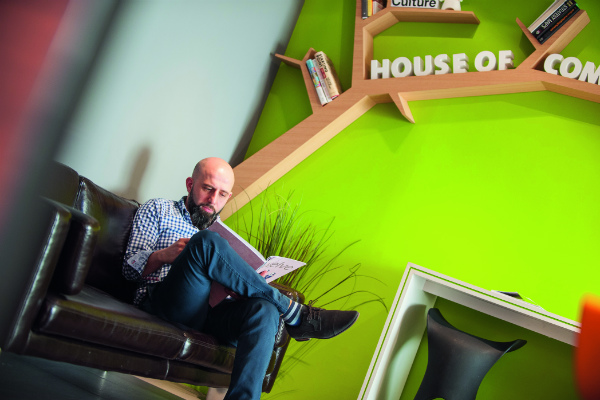 My senior year in high school was pivotal – everything after this point was a result of knowing exactly what I wanted as a career. Though I hardly knew anything about it, I wanted nothing else but to be a businessman. I only knew I wanted to climb the so-called ‘corporate ladder’ because the term held a certain ring to it. I was young, but I was a dreamer. I studied hard and became a ‘business computer’ student for the next four years. It was a pioneering course and my major was a hybrid of business, marketing, communications, and hard core computer science courses including Java, C++ and other computer languages.

During my last year at university I had a couple of internships as part of the programme. The last one eventually turned into an official employment where I became a sales and marketing coordinator for a major construction company in Lebanon. I stayed there for a year, and it was a great learning experience for me. Being in Lebanon I felt limited in terms of career growth, so I travelled to Dubai, which was the perfect place to explore opportunities. In March 2003 I joined a marketing consultancy firm called CRM Middle East. As part of a German group, I learned a lot about processes, time management and efficiency. I moved up to team supervisor, and then project manager during the seven years I was there, eventually becoming second in command. My managing director was a great leader and an amazing mentor. I learned so much from her and I owe her a lot for where I am now.

I was drawn to the world of advertising, and conversations I had with people from the industry were always enriching and engaging. I ended up with an offer at one of the big networks but had to be discerning of my choices. My prospects for an exciting career were not to be bound by routine. I sought the adrenaline rush of the unexplored but I was still after the stimulus of embracing challenges larger than those I have already conquered. That challenge came when I was recommended to Serviceplan Middle East as a group account director – a boutique agency with headquarters in Germany and an exciting brand like BMW as a key client. With only seven months in operation in the Middle East, one office in Dubai responsible for 14 markets, and a team of 15 people, I knew I found my home. It was the fastest decision I ever took throughout my career, and yet it was the decision that would forever change my outlook in life.

I particularly remember my third week at Serviceplan Middle East. I came home at 5am, took a shower and got ready for a pitch presentation at 8am. I was stretched and challenged, but I was happy and it all paid off. After three years I became a managing partner, which was a definite high. But it wasn’t easy. From a team member I had to quickly evolve into a team leader, and everyone started looking up to me. They expected me to make the right decisions, leaving me no room for mistakes. I do not claim to always have the right answers or solutions, but I do know one thing – that I have the full support of a team who trusts me enough to take my lead. Another high has been the support and confidence of our steering committee, which has seen us through a lot over the past four years, including a double growth of the business, and expanding the team to 34 people.

It’s all about the attitude – you toughen up and take all the highs and lows together, or you weaken your resolve by choosing the easy road. It’s important to stay curious, keep learning and discovering, and never stand still. Also, don’t be afraid to fail. Welcome criticism and share knowledge with those around you. Find good mentors and be loyal to them, and then become a mentor yourself. Be creative and think differently – if an idea is rejected, don’t be disappointed; take a step back and come up with a new one. Stay positive, be optimistic, and most importantly show appreciation.