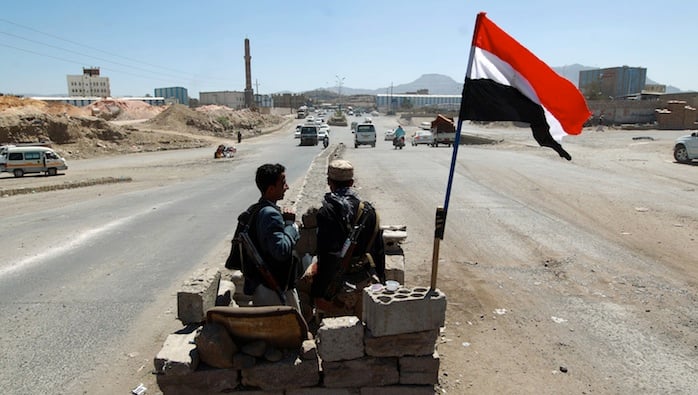 Yemen’s dominant Houthi group accepted on Sunday a five-day humanitarian ceasefire proposed by its adversary Saudi Arabia but said it would respond to any violations of the pause.

Neighbouring Saudi Arabia had said on Friday that the ceasefire could begin on Tuesday if the Iranian-allied militia agreed to the pause, which would let in badly needed food and medical supplies.

Backed by the United States, a Saudi-led coalition has been conducting air strikes against the Houthis and army units loyal to ex-president Ali Abdullah Saleh since March 26 with the aim of restoring the government of President Abd-Rabbu Mansour Hadi.

“We will deal positively with any efforts, calls or serious and positive measures that would help lift the suffering and allow aid, supplies and ships to move safely to Yemen,” the Houthis said in a statement carried by state media Saba.

Colonel Sharaf Luqman, spokesperson for the Houthi-allied army, said on Sunday Yemeni forces had agreed to the truce but would confront any attacks by Hadi loyalists on battlefronts which stretch across much of the impoverished country.

The Houthis say their campaign is aimed at defeating al Qaeda militants based in Yemen and accuse Hadi’s forces of supporting the group.

“Any military violation of the ceasefire from al Qaeda and those who stand with it … will be responded to,” Luqman said in a statement published by Saba news agency.

Arab planes bombed for a second day in a row the vast compound in the capital Sanaa which is home to ex-president Saleh, a key player in Yemen’s political crisis whose loyalists in the army fight on the Houthis’ side.

Saleh, a wily political operator, appeared unscathed and stood before the ruins of his political residence to taunt Saudi Arabia in remarks televised by his TV channel, Yemen Today.

“It isn’t just me who is being targeted but every citizen … This aggression is cowardly. Go ahead and come by land, we’ll make a welcome for you,” Saleh, wearing sunglasses, said calmly.

Arab air strikes also hit weapons caches at a military base and a presidential palace in the southern city of Aden, the epicentre of fighting for more than six weeks, and southern fighters questioned the proposed pause.

“We doubt that the Houthis would stick to a ceasefire or truce because they have repeatedly broken political commitments they have made in the past,” a pro-Hadi militiaman in the city told Reuters.

Riyadh has urged civilians to evacuate the province, a call that has drawn criticism from the United Nations.

“The indiscriminate bombing of populated areas, with or without prior warning, is in contravention of international humanitarian law,” the U.N. Humanitarian Coordinator for Yemen Johannes van der Klaauw said in a statement.

“Many civilians are effectively trapped in Saada as they are unable to access transport because of the fuel shortage. The targeting of an entire governorate will put countless civilians at risk.”

International concern about the humanitarian situation has grown as the strikes have killed more than 1,300 people, sent locals fleeing from their homes and destroyed infrastructure, leading to shortages of food, medicine and fuel.

Iranian news agency Tasnim said an aid ship would set sail for the Houthi-controlled Red Sea port of Hodaida on Sunday, in a move that will likely be blocked by the Saudi-led coalition.

Iran denies arming the Houthis, but the Sunni Muslim monarchies leading the campaign believe Tehran is using the Shi’ite Houthis to gain a foothold in the Arabian Peninsula and have blocked previous aid flights.

Anwar Gargash, minister of state for foreign affairs for the United Arab Emirates, welcomed the Houthis’ acceptance of a ceasefire and said he hoped it would lead to political talks.

“The Houthis acceptance of the truce offer is important. Their realizing that they are part of the diverse Yemeni fabric and not a tool for regional influence is essential,” he wrote on his Twitter account.

Saleh and the Houthis have asked for a U.N.-backed political dialogue, but their opponents say they have yet to make any concessions and have called for them to end their military push on Aden and Yemen’s south.

As the fighting raged, Saleh said foreign intervention was failing and that reconciliation could come only from within.

“Look for a solution to exit from your quagmire of killing and destroying the Yemeni people. Stop drinking Yemeni blood and let us solve our differences,” he said on Sunday.