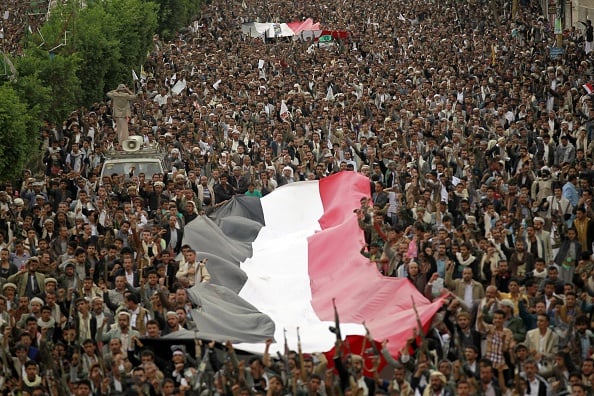 The UAE’s foreign affairs ministry “condemned in the strongest possible terms” the occupation of the UAE embassy on Monday, the report said.

It has called for the immediate evacuation of the embassy and demanded that rebels restore it to the embassy staff.

“This act is further evidence that the group which committed this attack does not show any regard or respect for international conventions and diplomatic norms, as it practises jungle law,” the ministry said in a statement.

“This criminal act is a flagrant violation of international law, the Vienna Convention on Diplomatic Relations of 1961 relating to the immunities enjoyed by foreign embassies and the United Nations General Assembly resolution 121/69 on taking effective measures to enhance the protection, security and safety of diplomatic and consular missions and representatives, adopted at the General Assembly in December 2014.”

It added: “The UAE retains the right to bring perpetrators of this attack to justice and accountability.”

Officials also stressed that the occupation of the embassy will not deter the UAE’s support for the Saudi-led coalition that is fighting Houthi rebels to restore the Yemeni government under Abd-Rabbu Mansour Hadi.

An official source at the Saudi foreign ministry also condemned the attack, calling it “a flagrant attack on international norms, legislation and laws,” reported WAM.

The Saudi-led coalition of Middle Eastern countries began conducting air strikes in Yemen on March 26 to expel Houthi rebels who took over parts of the country in September 2014.

There have been a number of military casualties with soldiers from the kingdom and the UAE killed in conflict.

The situation has also led to a severe humanitarian crisis in Yemen.

According to the World Health Organisation, some 4,345 people have been killed and 22,110 injured since March 19.

“The humanitarian situation is nothing short of catastrophic. Every family in Yemen has been affected by this conflict,” International Committee of the Red Cross president Peter Maurer said earlier this month.