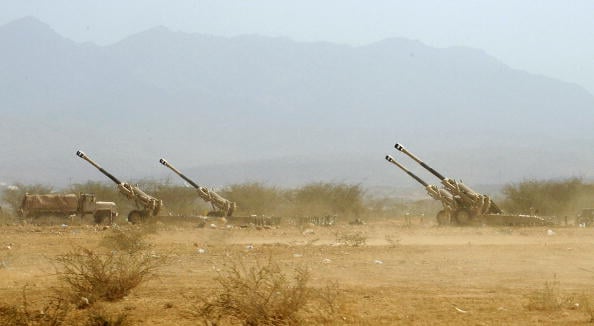 Yemen’s Houthi fighters fired mortar and rockets at a Saudi Arabian border town on Tuesday for the first time since a Saudi-led coalition began a military campaign against them in late March, the coalition’s spokesman said.

The projectiles struck a girls’ school and a hospital in Najran, which is only three km (two miles) from Yemen’s border, Brigadier General Ahmed Asseri said, prompting authorities to close down all schools in the area. There were no immediate details of any casualties.

The attack followed Monday’s statement by Riyadh that it was considering a ceasefire to allow humanitarian relief and a call by President Abd-Rabbu Mansour Hadi, in exile in Saudi Arabia, for talks among Yemen’s political factions.

“They were mortars and Katyushas fired randomly at a residential district. Unfortunately they hit a girls’ school, they hit a hospital and they hit some houses,” Asseri said in a phone interview.

“We will not let this action pass without reaction. The air force and other components of the coalition are taking care of the source of the attack,” he added. He said more details on the number and type of projectiles fired, and whether they caused any injuries, would be released later on Tuesday.

The United Nations said on Tuesday the conflict in Yemen had taken at least 646 civilian lives since coalition airstrikes began on March 26, including 131 children and that more than 1,364 civilians had been injured.

Saudi Arabia says the campaign is aimed at restoring Hadi’s government after the Houthis, allied to former president Ali Abdullah Saleh, seized the capital Sanaa in September, put the president under house arrest in January and then advanced south.

The Houthis say their campaign was aimed at fighting al Qaeda militants and to combat corruption.

King Salman on Tuesday announced the establishment of a centre to coordinate humanitarian assistance for Yemen, and invited the United Nations to join in relief work for the Arab country.

Footage of the aftermath of the attacks shown on state television showed punctured pavements and damaged houses and cars in an unidentified residential district, as well as empty shell casings.

Saudi al-Jazirah newspaper said on its website that flights had been suspended to Najran airport, which is located some two to three km from the border with Yemen.

Witnesses in Yemen had earlier said that Saudi forces had shelled the Yemeni side of the border after the Shi’ite militia fired several rounds towards Saudi territories.