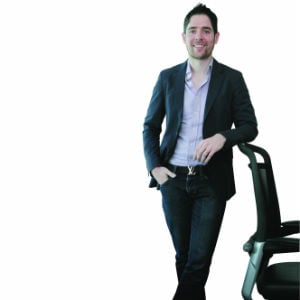 If you were to conjure up an image of the proverbial dot-com founder – you’d dream up Paul Kenny. The nattily-dressed 26-year-old Irishman might be young, but he thinks big. “I’m going to build the largest e-commerce site in the Middle East,” he says. Kenny launched Cobone, the regional group-discount website, just over a year ago amid a scrum of competition. Incumbent site GoNabit had already cornered some of the latent market with a four-month head start on Kenny.

“They were the first-mover but within six weeks we were number one,” he says, peering out over a barely-furnished office. Cobone, part of the locally-founded Jaber Internet Group which sold Maktoob,com in 2009, recently moved buildings to free up space for more employees. “Revenues have grown 30 per cent a month since we started.”

GoNabit was recently acquired by US group-discount buying site Living Social in a move that was widely seen as a positive for M&A activity within the tech sector, but Kenny attributes the takeover to
“desperation”. The CEO claims he now owns 67 per cent of the market, with US-firm Groupon commanding a 22 per cent share, GoNabit with six per cent, and the rest with smaller firms. “People don’t realise that it takes a lot resource to set up a group-buying site. The initial set up is resource heavy – you need to fill the finance, marketing and IT departments. A few of the smaller sites will disappear in time.”

Certainly, Cobone introduced a wide range of payment options, which has proved key in a developing market still wary of buying goods over the internet. Kenny’s site allows customers to purchase goods with credit cards, pre-paid cards and, crucially, cash-on-delivery.

“Local culture was holding e-commerce back. People perceived that the internet was not safe, although everyone paid their DEWA and Etisalat bill through the web. That culture is beginning to change but people still have that hesitancy,” he says. “Group discount sites are a gentle way to introduce the population to e-commerce. They already know the outlets we are displaying, they can even call them up and check, so it’s real.”

Group-buying sites have become household names globally, offering discounts on anything from nail spas to personal training sessions and restaurant meals. However, the Middle East market is still nascent and Kenny plans to soak up some of the potential growth. While some local firms make a profit by mass-discounting their products to large numbers of customers, the main selling point for companies displaying their deals on Cobone is the extra marketing and exposure the site can offer. A rock-bottom deal on a nail spa, for example, may lure clients away from their usual salon to try another beauty spot on the other side of town.

“Companies are realising that offline marketing is more expensive than online marketing. On day one, Cobone was a difficult sell – not now. Businesses have realised the value of it. You take that marketing budget and you flip it and you actually get cash back for it,” he says.

As local in-boxes begin to clutter up with deals on products and services, the range of offers has become bewilderingly wide, with Cobone even offering a discount for a RAK free-zone company license recently. Will this sort of non-descript discounting eventually cheapen the value of products and lead to apathy?

“The daily deal model is still very immature as a whole as it has been in operation for just over two years. From our experience we have found that diversification is key and offers more choice increases the audience size,” says Kenny. ” For example, we had a billboard at the Dubai Media One hotel which was extremely successful selling almost 40 units, a $28,000 Nissan Pathfinder that sold four units, and the UAE trade license sold two units. Diversifying the model is the key to success.”

Kenny can often be seen working until 3am. And when he’s not working on the site, he’s encouraging other employees in his company to take the plunge and become entrepreneurs in their own right – launching new divisions within Cobone.

“I act as a venture capitalist and they present their business plans to me. I’m going to prove that you can do anything no matter who you are.”