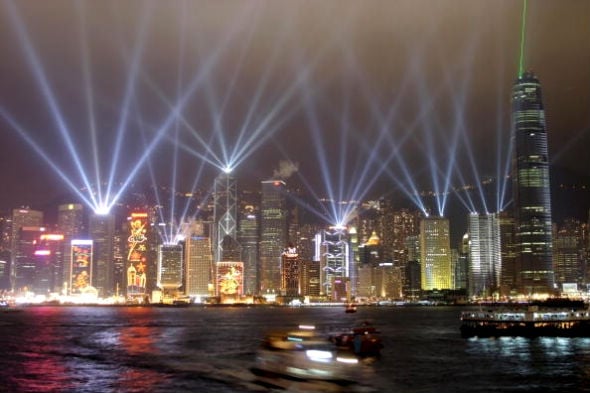 A little yin and yang exists in every person, but when found in a city it can provide an explosion of experiences. this pretty much defines Hong Kong, a city that juxtaposes the cutting-edge with the old, as if that’s the only way to be.

To begin with, if street life is the pulse of a city, then Hong Kong’s is throbbing hard. Cheap designer knockoffs, avant-garde paintings and cheap eats are just a word away from your best haggling skills. ladies’ market on tung Choi Street, for instance, is a one-kilometre stretch of roadside shopping that Dubai’s inherent shopaholics would describe as blissfully divine.

Food vendors and teahouses dot the streets selling wares that surprise, soothe and are nothing short of damn tasty. After all, eating in Hong Kong is not just about the food but also a social event and spectacle. So yum Cha(or dim sum) is a not just a food dish but a feast around which a family day out is centered. Similarly, the mere act of drinking tea is a ritualised ceremony that involves running the edge of a lid across the kettle or seeping green tea leaves in only 30-degrees water, as we learnt at a Chinese tea Appreciation course at lock Cha teahouse.

This intrinsic sense of variety that is present in every corner of the harbour city also extends to its transportation systems. From ferries to ding dings to the metro, the city even boasts of the longest outdoor covered escalator in the world that stretches from the downtown central business district to the mid-level residential area. the escalator provisions for numerous entry and exit points along the way, so much so that it kick-started a trendy art gallery and dining area known as Soho and gave a fresh lease of life to the city’s party central, lan Kwai Fong.

If you wish to cross the Hong Kong Harbour, then — at about Dhs1 — the Star Ferry is still the cheapest way, with the bonus of seeing dramatic skyscrapers rise like stars along both sides. time your crossing at around eight p.m. when the Victoria Harbour and its skyscrapers become part of a nightly multimedia light show complete with laser beams and searchlights.

But the best ride that you’ll get to take in Hong Kong calls for a day off.

Get aboard the Ngong Ping 360 — the biggest cableway in Asia — that carries you in its crystal glass-bottom cabins across panoramic views of the mountains of North Lantau Country Park and the seashores of the South China Sea. This is as close to walking on clouds as you’ll get in your lifetime.

Thereon, you can stroll along the Bodhi Path in Ngong Ping Village, which is lined on both sides with statues of the “Twelve Divine Generals”, and leads to the stunning Tian Tan Buddha Statue, the world’s largest outdoor bronze Buddha statue.

A bus ride away from here is Tai O, a tranquil fishing village with mangroves, fiddler crabs and stilt houses studded with “billions of blistering barnacles” that Captain Haddock would be proud of. It has a vibrant dried seafood market which is a food-lover’s paradise with vendors serving glutinous rice cakes, steamed rice dumplings, sun-dried shrimp paste and charcoal-grilled egg waffles. If you are in it for a dare then experiment with the salted duck eggs, bony chicken feet or soya-soaked sea slugs.

If you enjoy Tai O, then visiting Hong Kong’s outlying islands like Lamma and Cheung Chau is a must-squeeze into your calendar. They’re around an hour by ferry from Central, and make for great places to hike, fish, swim and sample seafood.

The whirlwind of Hong Kong can be captured in its spectacular bird’s eye views. The popular option is the Peak that at 1,800-feet-high presents a sight to behold. But the journey to it is even more exciting than the destination, with a tram that clambers up the Victoria Peak at a jaw-dropping impossible 70-degrees angle, making you feel much like Spiderman.

If you prefer a less-crowded experience then step into the Sky 100. A futuristic observation deck at the 100th floor of the tallest skyscraper in Hong Kong, it offers 360-degrees views of all the islands and even provisions for time-lapse views of the seven- million strong city, a perfect way to bid adieu to this gorgeous city.