He's Still The One - Gulf Business 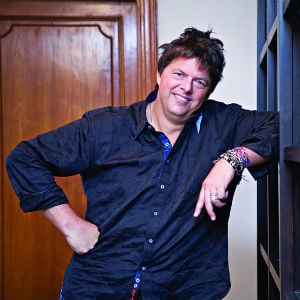 Thomas Lundgren sits casually at his computer-less desk, legs draped over a chair. “Listen, I don’t want any photos taken. I haven’t had my hair cut for three months,” the Swedish CEO says with trademark honesty.

Ruffling his borderline-Bohemian hair, the boss of the region’s coolest furniture store says, “right now, I feel fantastic.” But it wasn’t always this way. The unforgiving global crisis put the brakes on the CEO’s mission to ‘save the world from Ikea’, and Lundgren stood chastened as his firm’s revenues tumbled by 18 per cent in the 12 months to March 2010 to $82 million.

The One’s recent fortunes have been very closely tied to the global economy. Before 2009, when the Gulf was flooded with new arrivals armed with even newer credit cards, Lundgren cleaned up on furniture sales.

“Before [the crisis] people would buy a whole living room, but now it’s more like the real world where people think about changing their cushions and perhaps buying a sofa later on. You didn’t even need to do anything then, the customers just came – but after the crisis they disappeared. We were affected badly by the recession because we fell into the trap of getting lazy because nothing seemed to matter.”

By his own admission, Dubai’s most flamboyant CEO (AKA Chief Emotional Officer) regrets his complacency. “Just before the crisis I became burnt out. I didn’t take the time out to get my inspiration back. And if you’re on the top and you’re not inspirational, the business is finished,” he says. “I always put so much pressure on myself and I never felt like I did enough. Slowly I’ve started to arrive at his place where I feel relaxed, it seems like the whole team has gelled together in the last six months and things have fallen into place – we are on the same planet.”

It helps, of course, that the firm’s revenues have finally reached pre-crisis levels, stabilising at just over $100 million for the financial year 2010. And staff numbers are slowly increasing – back up to 630 – after Lundgren showed the door to around 100 staff in 2009.

Most importantly for Lundgren, who calls himself an ‘ideas’ man, the new initiatives have begun to flow again with the launch of a new concept store on Dubai’s Sheikh Zayed and plans for two more stores in Beirut, Lebanon.

There’s a zen-like quality to The One office, strewn as it is with quirky, philosophical mantras and random pieces of furniture. “I don’t want to live like you. I don’t want to talk like you. I’m going to be like me.” No, Lundgren didn’t say that, Paul McCartney did – but the CEO has emblazoned the quote across the entrance to his office.

“Here,” the CEO says, passing over a gift. It’s a key ring that jangles with a tiny stiletto shoe and the somewhat upfront slogan: ‘Queen of ******* everything’. “We were getting complaints so I had to stop selling it – it’s a shame as I think it’s really cool.”

Lundgren possesses an endearing vulnerability and a rare showmanship in a city awash with carbon-copy CEOs. At times, you wonder, is this man the real deal? But when you look at him – his singular gaze – and around him – at the mini-empire he built from scratch across five, soon to be six, countries, with the aim of ‘rescuing the world from just another retailer’ it’s clear that he’s not finished with his mission just yet.

The One currently has 14 stores (or ‘theatres’ as Lundgren likes to call them) across the UAE, Kuwait, Bahrain, Jordan and Qatar, including the newly launched lifestyle concept store on Dubai’s Sheikh Zayed Road – “the coolest store in the world. It’s fun. It’s amazing. A whole new concept in furniture buying” – along with plans for two more stores in Beirut.

The next stage in the The One’s journey will be just one more step in what has been an extraordinary chain of events, laced with serendipity and sheer hard work. In the 1990s, Lundgren landed in Dubai having worked at Ikea in Kuwait as a decoration manager. “I was offered a job in Kuwait, not because I was good, but because no-one wants to go there really,” he says, deadpan.

Lundgren was forced to leave Kuwait because of the Gulf War where he says he and his family lost almost nearly everything they owned. But this tragic twist of fate led Lundgren to ponder on what Ikea was doing wrong. “I’d always looked up to Ingvar Kamprad (founder of Ikea) and his dream but while working in Kuwait I learned that he didn’t actually stay true to his vision, it was lies,” he says. “Then an angel came to me and I decided that I would save the world from Ikea,” he says, deadpan again.

Lundgren moved to Dubai and set about finding funding for his dream of opening his very own anti-Ikea pan-Arab furniture store. Five million dollars and 20 rejection letters later (these take pride of place in his office) the CEO opened his first store in Abu Dhabi, UAE in 1996. The firm quickly moved its store to Jumeirah in Dubai where they found a more ready customer base, from then the business soared and The One became a household name in the Gulf.

“When I was walking knocking on doors selling the idea, most people just patronised me and just patted me on the head. The first stage to setting up your own business is all about perseverance. If you can get through those initial stages, you will be able to make it; but the next stage is the hardest part. To be an entrepreneur you need to be naive, because if you knew what the price was at the next stage – getting your dream to work – you wouldn’t do it.”

“You dream of this goal of when you become successful everything will be happiness, but that goal doesn’t exist. It’s a nirvana you’re never going to reach. There is always a problem somewhere whether it’s work, your health or your head,” he says. “I’ve come to the conclusion is that you can only find peace within yourself. You are what you do. That’s what you are. But the real test to be a good leader is staying authentic and true to yourself, even with all the pressures from outside.”

The next test of Lundgren’s authenticity will come as the global economy continues to teeter on the edge of a new crisis. For now, the outlook for UAE retail remains strong, with a 33 per cent growth projection over the next four years. And, this time, come what may, Lundgren will not let his steely focus slip. Today he’s happy with the place he’s in. “Now people care again, things matter again, and that what’s why I loved the crisis.”

The world according to Thomas Lundgren

If I could change the world

I would put all bankers into jail. I would also give everyone a computer hat that could tell whether people were lying, so everyone would be forced to live their own truths.

It was very cool at my school reunion because my ex-peers were waiting for me and I said “why are you waiting?” They said “you were always the leader”. I was shocked because I didn’t see myself as the leader when I was young. This gave me a new perspective on how we see ourselves at different ages. When we are young, we are negative – you’re too short, or too tall, or you don’t get the girls you want. But as we get older we think we are better than we are. There’s nobody in the world that thinks they get paid too much, and we all think we do more than we actually do.

I can’t see myself in Sweden, I’m so not Swedish and I’m from the north of Sweden where you don’t speak and you’re very quiet – so I don’t fit in. It’s so cold in the winter that you don’t expend energy on talking.

Dubai has a fantastic, entrepreneurial spirit, but the government could help out by changing some of the laws. The whole First World has a bankruptcy law, and if they want to be a First World country, the UAE needs one too.

Coming fifth in the UAE Great Place to Work list

We learned a lot through the Great Place to Work survey, we changed a lot of things. Everyone except six people from The One entered the feedback form. We had a 90.84 per cent response rate,
which was a world record, compared to the standard 65 per cent globally.