Dubai is all set to enjoy safe, seamless and secure New Year (NYE) celebrations. The Executive Committee for Securing International and Local Events in Dubai announced it had wrapped up preparations to that effect, at a press conference on December 30.

Major General Saif Muhair Al Mazrouei, acting assistant commandant for Operations Affairs at Dubai Police and acting chairman of the Executive Committee for Securing International and Local Events in Dubai, said the committee is working closely with 48 entities to ensure the highest safety, security and accessibility during the New Year celebrations.

A total of 10,597 personnel, 5,800 security guards, 1,420 volunteers, 3,651 patrols and vehicles, and 45 marine boats have been deployed across the 30 locations where celebrations and fireworks will take place, according to the state news agency, WAM.

The Executive Committee for Securing International and Local Events in Dubai announced at a press conference that it has completed the final preparations for ensuring safe and secure #MyDubaiNewYear’s celebrations. The press conference was held at the Emaar Operations Room. pic.twitter.com/FVMAxJrUWo

The committee’s preparations were underscored by a smart plan created by Dubai Police in conjunction with the RTA to help ease traffic movement and mobility during the New Year celebrations.

To ensure that, RTA’s Enterprise Command and Control Centre will use 10,000 cameras for the smart surveillance of roads.

Major general Al Mazrouei urged the public to cooperate with the police and adhere to traffic instructions to avoid congestion.

The committee has created three dedicated routes for the public to reach the Burj Khalifa area using Dubai Metro, according to WAM.

The first route from the Burj Khalifa station is divided into two paths, one for families heading to the Island Park and the area behind the Tower View, and the second for other groups heading to the South Ridge from where New Year revellers can enjoy the fireworks.

The second route is from the Financial Centre station with a path dedicated to families heading to the Boulevard area, and another path for other groups heading to the South Edge area.

The third route provides a direct path from the Business Bay station. 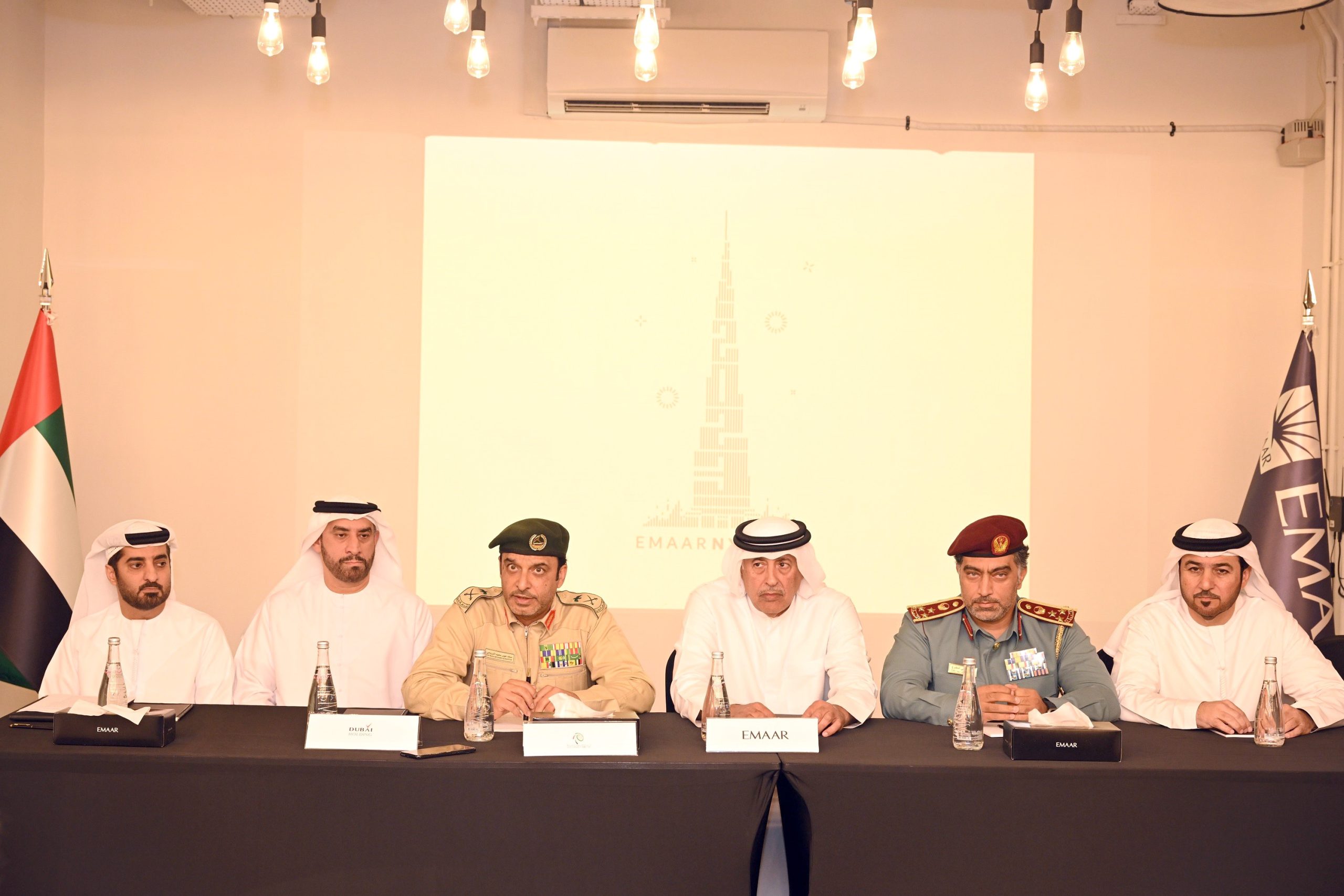 Major general Al Mazrouei said the committee has developed an integrated plan to streamline access for metro users to the locations of fireworks. The plan includes separated paths for families and after-show exit routes and fire exits for emergencies.

“The Burj Khalifa station and the metro link, which connects to the Dubai Mall, will be closed at 5pm or when the numbers exceed the capacity of the station. Specific routes have been set out for shoppers and spectators inside the Dubai Mall,” said Major General Al Mazrouei.

Ahmad Thani Al Matrooshi, board member, Emaar Properties, said as part of Emaar’s preparations for its fireworks at Burj Khalifa, Mohammed bin Rashid Boulevard will be closed at 6pm, which requires people who have bookings that include parking at hotels or restaurants to arrive before that time. He also said that Dubai Mall’s parking will be available till it reaches its maximum capacity. Members of the public will not be able to access parking areas after the closure of the surrounding roads, according to WAM.

“The Dubai Civil Defence carried out several evacuation drills with various strategic partners at event sites to ensure the safety, protection and happiness of the public. The Dubai Civil Defence teams have also conducted inspections of buildings and facilities where events will be held to ensure prevention, safety and fire protection systems meet the highest benchmarks,” Al Mutawa said.

Badr Al Sayiri, ED of the Traffic Department at the Traffic and Roads Agency of the Roads and Transport Authority (RTA), said the movement of traffic and transportation will be managed on New Year’s Eve from RTA’s Enterprise Command and Control Centre (EC3), one of the largest and most sophisticated control centres in the world.

He noted that teams from RTA, Dubai Police, Dubai Civil Defense and the Dubai Corporation for Ambulance Services will be deployed at the EC3 on New Year’s Eve to streamline the movement of traffic and visitors on New Year’s eve in various key locations in Dubai, especially the Burj Khalifa area.

Sheikh Mohammed bin Rashid Boulevard will be closed at 6:00 pm or once its parking area reaches full capacity.

The Lower Deck of the Financial Centre Road and Al Sukook Street will be closed at 8pm. The Al Asayel Road, extending from Oud Metha Road and leading to Burj Khalifa district, is scheduled to be closed at 4pm for the exclusive use of public buses and emergency vehicles.

During the event, Al Mustaqbal Street will gradually shut down between 2nd Za’abeel Road and Al Meydan Road starting from 4pm.

The Burj Khalifa Metro Station will be closed from 5pm on New Year’s eve to 6am the next day.

Al Sayiri added that 210 buses will be deployed to facilitate the exit of visitors from the venues of celebrations, especially to nearby metro stations and parking lots. The bus service will be free of charge for commuters on the following routes:

Parking
The public will have access to a total of approximately 1,500 parking spaces outside event areas for moving to and from event sites via the commuter bus service, which will be in operation starting from 3pm. A total of 1,000 parking spaces will be available at Al Wasl Club, while 500 will be allocated at the General Directorate of Residency and Foreigners Affairs in Al Jafiliya.

Taxi services
Parking lots for taxis have been designated at the General Directorate of Residency and Foreigners Affairs and the Al Wasl Club, where the public can be transported from event locations by buses during departure and after the evacuation of the site.

Metro and tram services
Starting from 5am on Saturday, December 31, 2022, the red and green lines of the Dubai Metro will start operating continuously until 12am on Monday 2 January 2023 for a period of 42 hours. The tram will operate continuously from 6:00 am on Saturday 31 December 2022 to 1am, Monday, January 2, 2023, to provide the public access to event areas and facilitate their exit after the end of the shows.

Directional signage and intelligent traffic systems
RTA will install directional signs within the Burj Khalifa District to ease the movement of pedestrians to and from the venue of events. For public safety, pedestrian bridges on the Dubai Water Canal will be closed, as well as the associated lifts. The pedestrian walkway on Sheikh Zayed Road above the Canal will also be closed, WAM reported.

Al-Ghafli said the public could use free shuttle buses from Nakheel Mall to the waterfront destination, which will be available from 8pm on 31 December to 3am on January 1 2023.

The Palm Monorail will also be available to move easily to different destinations in Palm Jumeirah for additional hours from 9am on December 31 2022 to 2am on 1 January 2023.

Ambulance readiness
Mishaal Abdul Karim Julfar, executive director of the Dubai Corporation for Ambulance Services, said: “We are working with our strategic partners in the Executive Committee for Securing International and Local Events, to ensure safe and secure New Year celebrations.

“This year we have allocated 1,200 well-trained staff and deployed 287 vehicles in four sectors. Our technical equipment and vehicles include ambulances, rapid responders, bicycles, boats and air ambulances operated in cooperation with the Dubai Police Air Wing Centre, in addition to supplying vehicles for field support. Through its quality services, the Corporation is committed to ensuring the highest preparedness of ambulances to tackle the most difficult cases.”

Members of the public requiring assistance can call Dubai Police on 999 for emergencies and 901 for non-emergencies.

Read: RTA announces schedule of services for New Year’s Eve, here’s what you need to know