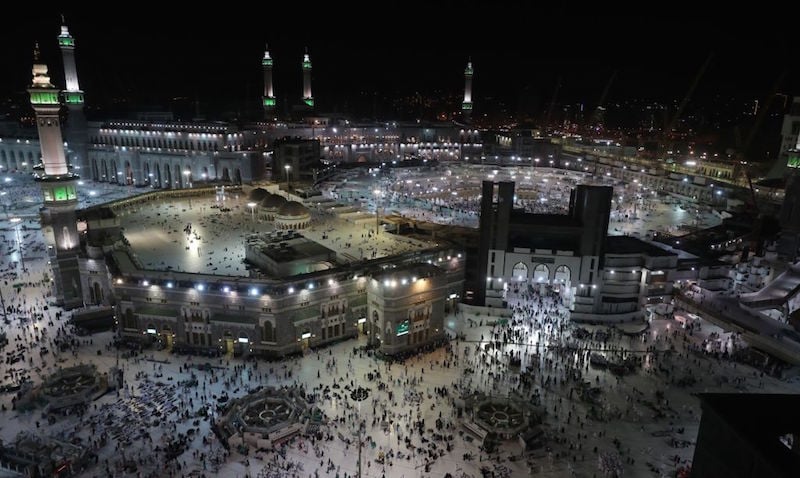 As more than 2 million pilgrims from around the world braved stormy weather in Saudi Arabia on Sunday to begin the annual hajj ritual, the country’s health minister said there was no sign of any outbreaks of disease.

Worshippers arrived in the kingdom last week for the five-day ritual – a once-in-a-lifetime religious duty for every able-bodied Muslim who can afford it, which retraces the route Prophet Mohammad took 14 centuries ago.

Several hours of heavy rain and thunderstorms forced pilgrims to take cover in tents and trudge through puddles, with civil defence warning of possible flooding throughout the evening but denying any adverse effects on the rituals.

Some pilgrims prayed at the Grand Mosque before heading to the Mina area or towards Mount Arafat, east of Makkah, where the Prophet is believed to have delivered his final sermon to followers.

They will all arrive by Monday morning at Mount Arafat. Eid al-Adha, or feast of the sacrifice, begins on Tuesday, when pilgrims begin three days of casting stones at walls in a symbolic renunciation of the devil.

Khalaf Aziz fled his native Syria three years ago and is performing his fourth hajj, this one in honour of his grandmother who died earlier this year.

“My cousin died in an air strike and my uncle was shot to death, may they rest in peace. Two years ago, I performed hajj for the former, and last year for the later,” said the 32-year-old from Deir al-Zor. “This year, I am doing it for my grandmother.”

“Praise to God, everything now is under control and health conditions are excellent,” he said in an interview at Mina Public Hospital.

The potential for disease spreading among pilgrims, who spend five days in close quarters, often eating outside and sleeping on the ground near holy sites, is a perennial concern.

The world’s largest annual gathering of Muslims has in the past also seen deadly stampedes, fires and riots, with authorities sometimes struggling to respond.

A crush in 2015 killed nearly 800 pilgrims, according to Riyadh, although counts by countries of repatriated bodies showed over 2,000 may have died, more than 400 of them Iranians.

The interior ministry has put in place measures to confront any security threat from militant attacks to political protests, but no specific threats have been detected, a spokesman said on Saturday.

Yemeni Qaboos Ghalib said he felt reborn performing hajj for the first time: “I hope peace prevails in the Arab nation in general and in Yemen specifically, and that the war ends.”

Pilgrimage is also the backbone of a plan to expand tourism under a drive to diversify the kingdom’s economy away from oil. The hajj and year-round umrah generate billions of dollars in revenue from worshippers’ lodging, transport, fees and gifts.

Some pilgrims on Saturday hiked 700 metres (2,300 feet) to the tiny Hira cave, where Muslims believe the Prophet was visited by the Angel Gabriel and began to receive Koranic recitations.

“It’s indescribable. It’s overwhelming to see how his impact has been on this world,” said American pilgrim Nasser Mahmoud. “But that’s where it all started. It’s a very humble thing, you can’t even stand there.”