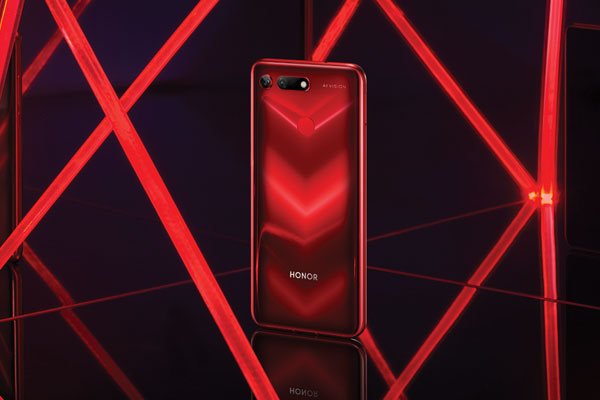 Featuring a gradient rear glass panel (in bright red and blue colours) with a “V” that appears to move with the light in different angles, the phone’s stand-out design is hard to miss.

For its flagship device, Honor has partnered with luxury fashion house Moschino and the Italian brand’s ubiquitous teddy bear stares out from the device’s default screen background.

But it’s not just looks that Honor has invested in. The View 20 features a f/1.8 rear camera powered by the Sony 48MP sensor – which basically takes several pictures at once and collates the best details from each photo to create one 48MP picture, thanks to the AI ultra clarity mode provided by the Huawei’s HiSilicon Kirin 980 chipset.

Arguably the most talked about feature though is the so-called “punch-hole” 25MP selfie camera, which has a 4.5mm diameter that is housed within the screen.

The quality of photos we took was really impressive – especially the ones in low light. The slight drawback may be that the portrait mode only focuses on one person, rather than a group or other objects.

An interesting extra is a 3D camera with AR effects that can be used for motion-controlled gaming, body contouring in photos and videos as well as calorie counting. Perhaps more gimmicky, but will appeal to the younger generation of users.

The clarity on the 6.4-inch LCD touchscreen is worth mentioning, and the minimal bezels around the sides allows for better viewing.

Powered by, the device comes with a 4,000mAh battery – which the company promised would allow the phone to operate for a full day with a single charge. Happily we found that to be true during normal usage and the 4.5V/5A FastCharge is a great addition since the device charges up to 55 per cent in 30 minutes.

One of the features in the phone that we particularly liked is ‘Digital Balance’, which basically lets you control the amount of time you look at your phone. So what you can do – for instance – is set up the phone to restrict some apps (to force you to switch off) at a certain time at night.

Another feature we appreciated in the device is the presence of the headphone jack – which has been taken away in several new smartphones.

The View 20 also has a dual-band GPS to allow for more accurate directions, as well as a triple Wi-Fi antenna technology for better connectivity and a liquid cooling system to dissipate heat.

In the UAE, the phone is available with 8GB RAM and 256GB storage in sapphire blue, phantom blue and phantom red. Priced at Dhs2,399, the Honor View 20 sure packs a punch.