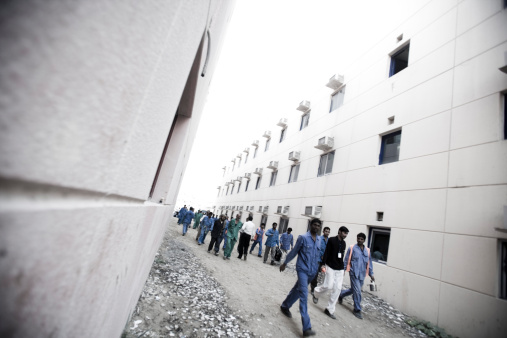 Millions of migrants seeking work in the Gulf construction industry are being forced to pay fees that can be equivalent to a year’s salary, according to a new report.

The Making Workers Pay study, co-authored by David Segall and Sarah Labowitz of New York University’s Stern Center for Business and Human Rights, details how most low-wage workers in sectors like construction pay the full cost and more for their recruitment into the industry.

“In this highly irregular system, neither construction companies nor their clients pay for the cost of labor force recruitment. Instead, tens of thousands of migrant workers enter the region’s construction industry each year, bearing both the actual costs of their recruitment and exploitative markups paid to a series of agents in South Asia and the Gulf,” the authors note.

“This leaves workers in extreme debt, increasing their vulnerability to subsequent abuse. Most commercial construction, engineering, architecture, and recruitment firms have yet to accept responsibility for the ubiquity of these fees, despite common industry practices that effectively encourage them.”

The report details a complex system of agents who each increase fees through additional markups, inflated transportation and other costs.

This was despite the actual cost of recruitment estimated to be between $400 and $650.

The authors also detail wrongdoing within the Gulf countries themselves, claiming “demand letters” for workers are issued by employers or representatives and then sold for significant markups despite the practice being illegal and the documents costing little or no money to first obtain.

“Selling visas for profit is illegal in all GCC countries, but violations of relevant laws are rarely prosecuted. Dhaka-based recruiters estimate the cost of each visa requested in a demand letter at between S$1,250 and $1,850, which represents between one-third and one-half of the average Bangladeshi migrant’s fee,” according to the report.

From this process demand letters pass through many hands with each adding a service fee, including unlicensed subagents who establish the first face to face contact with the worker in their home village.

The report also details how agents will often charge 50 per cent more than the actual price for an airline ticket.

The authors note that migration has the potential to fulfil the promise of decent work and increased earning potential, “even for low-wage construction workers”, but realising the goal will “require deep changes to current practices” adopted by construction firms, their government clients, subcontractors and governments.

“These groups should consider a model of shared responsibility, in which key actors come together to develop a common plan of action for assessing the scope of the problem in a transparent manner, determine the true costs of addressing it, and formulate an equitable plan to share responsibility for these costs.”

Labour abuses in the Gulf countries, which are undertaking billions of dollars of development projects, have drawn international media headlines in recent years.

Qatar in particularly has attracted negative attentions for its treatment of thousands of workers building its FIFA 2022 World Cup stadiums, with a recent report issued by the country’s organising body detailing the still harsh conditions faced by many foreign labourers.