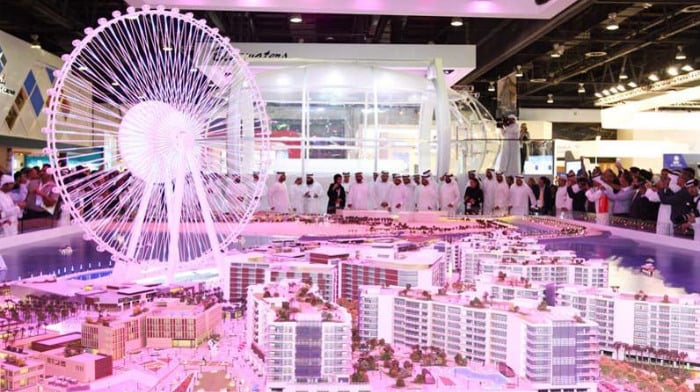 A stampede by competing apartment buyers in Dubai this week may have obscured signs that Dubai’s latest real estate boom is more restrained than the last one, which pushed the government close to default.

Dubai’s property spree in the middle of the last decade was built precariously on bank loans, spelling disaster for indebted developers when prices eventually crashed. The crisis shook financial markets around the world.

This time, both developers and investors have less access to loans from banks, which have become more cautious.

That is likely to slow or halt some projects, forcing developers to rely more on their own earnings, analysts and executives said at this week’s Cityscape property fair, the industry’s top annual event.

Meanwhile, the emirate is benefiting from a massive influx of buyers from other fast-growing Gulf states and from politically unstable countries elsewhere in the Arab world.

Many of them pay cash up front for properties before construction is completed, easing the risk for developers.

“There is no excessive leverage,” said Ziad El-Chaar, managing director of Damac, a Dubai developer which focuses on the luxury segment and was hit hard by the 2009-2010 crash.

“The main buyer today in Dubai comes from the Middle East,” and usually pays cash up front, he said.

The extent to which that statement is true will be important for Dubai’s financial stability in the next few years.

After plunging over 50 per cent, Dubai’s apartment prices have shot up by more than 20 per cent in the past 12 months as the economy has revived and balance sheets have partly healed.

That has triggered a wave of new real estate projects; plans for about $40 billion worth were announced in the first half of this year and a further $11 billion in the couple of weeks leading up to Cityscape.

Some of the grandiose plans, including a $3 billion development with penthouses worth $250 million each, and a suburban residential area with a giant pyramid, evoke the height of Dubai’s last boom.

State-owned developer Nakheel even said it would restart work on one of its most ill-starred projects, a palm-shaped artificial island with an amphitheatre which helped to drive it deep into debt a few years ago.

“We are seeing the same hype again as in 2008,” Jammal Hammoud, head of investment firm Milestones Capital, told a meeting at Cityscape.

Hours later, a scuffle broke out in the building as hundreds of would-be buyers lined up to take advantage of special offers from state-controlled developer Emaar Properties. Security had to be called to control the crowd.

One investor, who did not wish to be named, said he had just reserved a yet-to-be-built, four-bedroom apartment at Fountain Views, an Emaar project, for Dhs4 million ($1.1 million).

“I had just a few minutes to decide because there were so many behind me who wanted the unit. I just took it on the hope that Dubai will be booming soon,” said the Indian national.

The International Monetary Fund warned Dubai in July that too many property projects might create another boom-and-bust cycle in the economy of 2.2 million people.

There are some signs that the current boom is different.

Firstly, construction plans have still not reached the level of the last bull market. One project alone, announced before the October 2008 Cityscape and later suspended, was valued at $95 billion.

Secondly, banks are more cautious about lending to real estate projects than five years ago. Although they are very liquid, the year-on-year growth in loans in the United Arab Emirates was only 6.4 per cent in July.

European banks have been forced by trouble at home to cut back lending, while Dubai’s bond and stock markets still do not look deep enough to raise tens of billions of dollars quickly.

“A continued cautious stance taken by banks is why we won’t see a repeat of the collapse in 2008,” said Alan Robertson, regional chief executive at consultants Jones Lang LaSalle.

“Most projects announced now will be built through off-plan sales and limited bank financing.”

Regulation will also play a part.

Basel III banking standards due to be phased in around the world over the next few years could make it more expensive for banks to lend to real estate projects, while the UAE central bank is expected by the end of 2013 to introduce caps on banks’ mortgage lending and exposure to state-linked firms, including property developers.

This month the Dubai government doubled, to four per cent, the fee charged for land transactions – although with some property speculators aiming for returns of over 20 per cent from onselling projects, the fee may not by itself have a decisive impact.

It may take a year or two to discover whether Dubai’s latest real estate boom will implode. In the meantime, investors and developers will make money when they can.

Like some other private developers, Mulcandani was arrested for real estate fraud after Dubai’s crash. Eventually acquitted of all charges, he returned to the sector.

“It’s all cash buyers and there’s nothing wrong with that. No investor walks away from cash positions – it’s mostly a leverage position that people are likely to walk away from.”

Asked if the current boom resembled the last one, he said: “Now is different from 2008. Back then almost 95 per cent of the buyers did not expect to hold property until completion. Now at least 80 percent of buyers want to hold the property. If this changes, we are in trouble.”