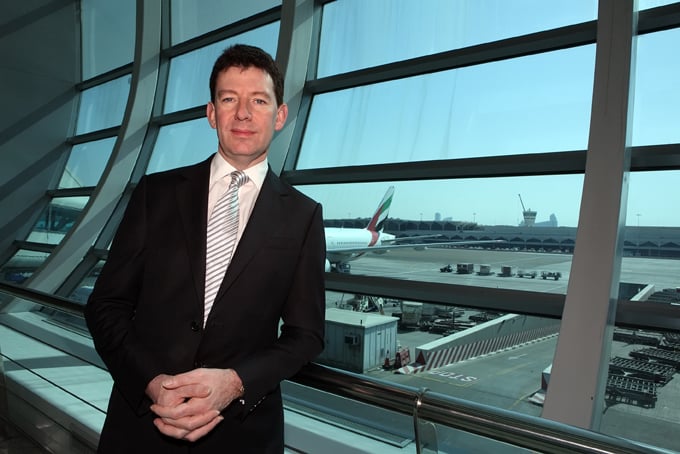 As established airlines in the United States continue to take fire at the Gulf ‘big three’ over alleged subsidies, the chief executive officer of Dubai Airports has told Gulf Business that standards rather than subsidies are the key to recent successes.

In an exclusive interview to be published in full at the end of this month, Paul Griffiths insisted that a focus on the customer was the main difference between Gulf airlines and their international counterparts.

“If the competitiveness of the product that other airlines were able to offer was as good as the service they receive on board some of the Gulf carriers, you would see consumers voting with their feet,” added Griffiths. “The service is just much better.”

On the attacks from US airlines specifically, he said: “I think the position is they are now trying to find ways of accusing United Arab Emirates carriers of unfair competition. My view and Tim Clark’s (Emirates Airline CEO) view is ‘bring it on’. There is no case to answer. There is no evidence that either Emirates or Dubai Airports is trading unprofitably or in need for subsidisation from external sources. We are a self-sustaining business as is Emirates, which was started with a tiny proportion of seed capital. Our revenues cover and justify our investments in infrastructure.”

Going further, the British CEO – who has been based in the Middle East for many years – criticised the US carriers for their lack of evidence. “First of all, usually when you get a dispute like this one party has suffered,” he said. “What I don’t understand about this is the big three – Delta, American and United – made $6.8bn last year.

“American on its own made $4.2bn, which is the largest profit it has ever recorded and those carriers serve six points in the region. I am not entirely sure why they are complaining so much when the ability to demonstrate that damage has been done seems so elusive’

Calling for liberalised aviation markets in general and an end to protectionism in the skies, Griffiths pointed to Australia as a best-practice example of relentless customer focus and highlighted Canada as a laggard. “Look at the approach taken in Australia,” said the CEO.

“There the minister stood up and said ‘what is best for the Australian people?’ and made the decision that the best thing to do was to liberalise the air transport market and encourage the maximum number of people possible to visit Australia. The attitude is ‘I don’t care how they get here as long as they come’.

“That motivated Qantas to bite the bullet, control its costs and create an airline that is much more effective and competitive in terms of customer service, and is able to deliver in the face of competition from other airlines. As a result, you have record visitor numbers, the maximum possible contribution to the Australian gross domestic product from overseas sources and a strong, vibrant and competitive aviation industry. That’s a great model.”

On Canada, he added: “There, in order to maintain a viable government-owned aviation entity – in Air Canada – the government has deliberately restricted the availability of capacity to serve the Canadian market. What has happened? Well, you try getting a flight to Toronto.

“Emirates is only allowed to fly three services a week when the market clearly can sustain a far higher level of service. So airfares are higher and more people are deterred from going to Canada when they can go to America or other parts of the world far more cheaply. The Canadian consumer is also paying a lot more in airfares. It means the Canadian economy is suffering and consumers are suffering. The only real beneficiary seems to be a very small number of employees at a government-subsidised airline. That, to me, is wrong.”

Asked if the Gulf ‘big three’ and Dubai as a global hub would become the dominant power in aviation within the near future, Griffiths said that this was indeed the direction of travel. “Look at our statistics now,” he added. “We have about 100 airlines serving around 260 destinations out of Dubai so the choice is impressive. The fastest and most comfortable global journeys by plane are usually now by way of Dubai.

“It’s that global connectivity and the competition in the world markets that the intercontinental hub facilitates that causes the growth. Every time we add a city to that global network, the potential just increases.”