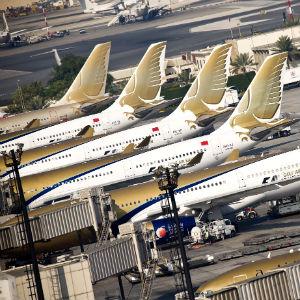 Gulf Air has announced several new flight paths across the Middle East in its winter timetable including seven additional flights between Dubai and Bahrain.

Bahrain’s flag carrier has brought its winter timetable forward to begin on September 10 and has included the new midday flights to Dubai, which takes the tally with its Gulf neighbour up to 63 flights per week.

Kuwait is also receiving an extra daily flight while Amman will have three additional flights, Beirut will now have four and Khartoum will see an extra five.

The airline’s new pre-winter timetable includes a greater number of flights between Bahrain and key GCC, MENA and Asian destinations.

Its fleet will also be upgraded on certain routes providing greater capacity. Other destinations to see an increase in flights include Dhaka, Kathmandu and Colombo.

Karim Makhlouf, chief commercial officer at Gulf Air, said: “Following the encouraging passenger growth we witnessed during the summer, we foresee the demand to continue through to the winter.

“Dubai particularly has seen excellent growth with high seat factors; therefore we have decided to add seven more frequencies for this route and bring forward our winter schedule that usually begins in late October to facilitate our customers with better and convenient travel options.”

Gulf Air last month announced significant savings across its business operations worth BD32.3 million and is targeting a further 15 per cent in cuts.