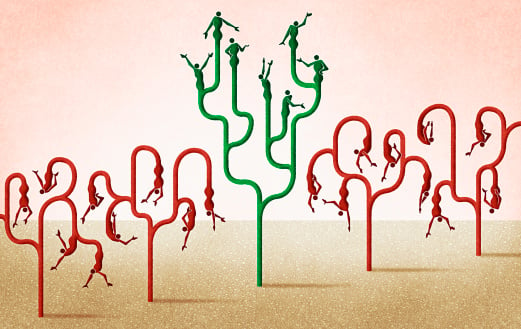 The term ‘impact economy’ has become somewhat of a buzzword in business circles in recent years. However, it was first coined more than a decade ago by the Rockefeller Foundation.

Back in 2007 a group of investors came up with the term “impact investing,” which was defined as “investments intended to create positive impact beyond financial return.”

It was a clear step away from the traditional Corporate Social Responsibility (CSR) route which many businesses then – and continue – to take.

Instead of donating a percentage of profits toward a charitable cause, the new system sees businesses inherently built with impact in mind. Ahmad Ashkar, founder of the Hult Prize and arguably the poster boy for the impact movement, describes it as “maximising shareholder value by achieving impact.”

Impact businesses aim to operate as any other business (with consumer demand and profit in mind) but with the added factor of being anchored by how they impact the environment, humanity and the world at large. As such, these new types of businesses often attract investment from everyone from venture capitalists looking to invest in something worthwhile to philanthropic organisations.

Indeed, as concerns about environmental change and social challenges become increasingly prevalent, many see the impact economy as a middle ground which allows ethical business to thrive within a capitalist structure.

“As social and environmental concerns are becoming increasingly urgent, entrepreneurs and companies are eager to generate business through the idea of “doing well by doing good,” explains Tatiana Antonelli Abella, the founder and managing director of Goumbook, a company which helps connect people and companies in order to enter the Middle East’s green economy.

Nicholas Brooks, the CEO of Zaeto, highlights that within the MENA region the impact economy is something that is starting to resonate with many governments at the level of policy making.

“The UAE has made a clear move towards a more sustainable future. For example, the United Nation’s Sustainable Development Goals (SDGs) were integrated into the country’s Expo 2020 Dubai plans when they were initially laid out. The government placed sustainability at the very highest of its priorities for hosting the event. Diversification from reliance on an oil economy is also a clear example of moving towards an impact economy.”

Interestingly, the managing director of Prudent Management Partners DMCC, CA Praveen Mehta, argues that the shift towards the impact business structure in economic discussion has more to do with perceived satisfaction within contemporary culture.

“Over the past few decades, the basic question everyone is asking – ‘Are we happy?’ Hence, there is increase interest in the impact economy because the accumulation and availability of ‘things’ may not be enough for people to feel ‘good’ about themselves. There are many problems in society at large, for example food shortages and waste, environmental issues, access to basic healthcare, and access to education. Overall happiness cannot, arguably, be solved by the traditional economy model alone.”

The impact economy on the global stage

The Hult Prize – which offers university students the opportunity to pitch and set up their own social enterprises with the support of seasoned professionals – has generated multiple international companies now operating within the impact economy. But it is not the only route to success in this space.

As Abella highlights, US shoe company TOMS, has been operating within the impact economy for more than a decade, managing a business model which is both financially viable and has social enterprise at its core.

“Their business model helps a person in need with every purchase,” she explains. “TOMS shoes have provided over 86 million pairs of shoes for children in need since they launched in 2006, TOMS eyewear has restored the sight over 600,000 people, and TOMS Roasting Company has provided safe water for over 600,000 people since launching in 2014. In 2015, TOMS Bag Collection was founded with the mission to help provide training for skilled birth attendants and distribute birth kits containing items that help a woman safely deliver her baby. As of 2016, it’s resulted in TOMS helping safe birth services for over 25,000 mothers,” she explains.

Another success story in the international impact economy space is ME to WE, a social enterprise which sells Fairtrade products and travel experiences. Aimed at a Millennial audience, the company was launched in 2006 by two Canadian brothers, Craig and Marc Kielburger.

“The brand’s innovate ‘Track Your Impact’ website brings technology to social impact, and allows consumers to enter a unique code from ME to WE products to transparently see exactly how and where the funds from their purchases are changing lives. This not only helps them make a positive impact, but it also allows their audience to be more involved and to see exactly how their choices are making an impact,” Abella explains.

Effect on the MENA region

It’s not just on the international stage that companies are garnering success in the impact economy. Many projects have launched in the GCC over the past decade, enabled in part by government legislation.

“The Dubai Metro is an excellent example of the impact economy at work on a city-wide scale,” says Mehta. Indeed, the metro system in the city is one of the few operating in the region, and compared to similar transport systems in some Western countries (train fares to commute in and out of London are notoriously high, for instance) the system in Dubai is cheap and affordable to all economic levels.

“In a city where one car per person was norm, people did not want to use public transport, It’s amazing to now see the Metro is busy throughout the day,” Mehta continues.

Over the past few years, smaller startups have also started to thrive in this space, too.

“I’m a big fan of Tom Arnel (a cofounder of Tom & Serg restaurant) and his ideas around sourcing sustainable foods,” says the Zaeto CEO Brooks.

The café opened at the start of a wave of similar locally developed concepts in 2013, which saw a big demand for restaurants which focus on ethically (and sustainably) sourced produce.

It’s not something which is limited to the region’s powerful F&B market, however. As Brooks notes, it is a concept which is taking off in a diverse number of industries.

“Another example of note is the Emirates Leisure Retail (ELR) and Maritime & Mercantile International (MMI), whose warehouse and distribution manager Jason O’Keefe, has posted some positive figures,” he says.

The company has had a big push towards vehicles which produce less pollution and are more energy efficient. “The vehicles are also running cleaner as there is reduced soot, ultimately producing over 10 per cent average fuel savings on the trial vehicles.”

Another area which has seen big growth in the impact economy over the past decade is the hospitality industry. As Patrick Moukarzel, the general manager of luxury five-star hotel Al Bait Sharjah, tells Gulf Business, there are many small changes which hotels can make which improve revenue and support social development.

“At Al Bait we have a policy of zero waste management and are 100 per cent plastic free. We also produce our own still and sparkling water locally, have monitor sensors in place across the property to avoid unnecessary energy consumption, and each room key is made of reusable metal rather than disposable plastic. Every suite also has a beautiful sculpted glass water droplet and upon checking in, guests are briefed to place the droplet on the bed as a cue for housekeeping to make the bed, without changing the sheets to reduce water and energy consumption.”

The hotel is also home to a Tesla charging station which can be used by inhouse guests as well as the public.

Maria Conceicao, a motivational speaker working within the charitable sector, highlights that the impact economy is by no means a one-stop solution to the environmental and inequality issues facing the world.

Conceicao also raises the point that despite charitable donations and the impact economy not being interdependent, it does not mean that the former is not affected by the latter. “Consumers are now more likely to buy products from companies that make a positive impact, which is great, but those buyers then satisfy their ‘do good factor’ for the day, so people who may have gone on to donate $10 to charity later in the day or week won’t feel the need to do so, even though their purchase may have only provided few cents towards social impact.”

In a similar way, Brooks highlights that consumer behaviour is a key issue in the development of the impact economy. “We are all consumers, to whom having and showing off the latest and greatest phone, holiday snaps and cars seem to be part of life, especially with the rise of social media. I feel we are too busy ‘hashtagging’ new things. Products don’t appear to be made to last, because companies tell us we need to update them in six months, which I feel is a failure. We should be proud to have something built to last or use products which are made to do so, especially in the case of machinery. Given how quickly electronics are updated, I suppose it really comes down to whether we can wait a little longer [to buy something].”

Abella goes further to say so far, as a global operation, the impact economy “has failed because of too much greed.” She continues: “hopefully [moving forward] we are all more aware and responsible towards future generations.”

Does CSR still have a place?

“The way GCC companies see CSR is old fashioned,” says Abella. “There is no real strategy within the business and no long-term plans, and these companies need to look further into proper sustainability, digging deeper into their operations, the way they hire or the impact their products and services have on the environment.”

However, Moukarzel highlights there are still many countries that are still falling behind when it comes to CSR, let alone the impact economy.

“It is sad to see that there is a huge gap between countries in terms of ethical practices. Though some countries are extremely focused to push CSR all the way, other countries don’t even start thinking about it. The global aim is to save the environment by eliminating the use of plastics. However, due to its convenience, there are countries that are using it 100 per cent,” he says.

“On the other hand, it is pleasing to note that there are countries like France and Singapore are leading the way to eliminate plastic at least in their own territory. However, there is still a long way to go.”