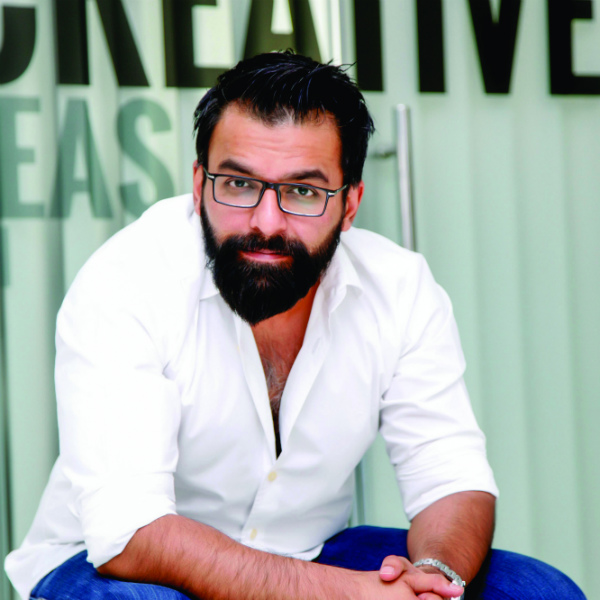 I was born and raised in Bahrain and moved to Pakistan after high school, where I graduated with honours in business administration and majored in marketing. My education in creative expression, which remains the mainstay of everything I do, began at a much earlier age. I discovered music in the formal sense when I was in seventh grade, which led to writing and composing – something I continued with during university and still do. Had fate not led me to my marketing mentor, I would have pursued a creative career regardless.

My first job after university was as a sales executive selling discount coupon options to small businesses. The lack of creative flexibility did not tie me to that position for long and I landed an interview with the ‘grand daddy of PR’, who hired me at his firm for my first role. The job gave me great exposure to some of the world’s finest brands, including Microsoft, which was one of the first accounts that I handled at the agency. I rose through the ranks to become general manager before venturing out on my own to create a consumer fashion event concept in Pakistan – Wedding Asia. The first edition of the event was in 2005. The need for a change brought me to Dubai in 2007 and, eventually, to bSocial. This had been my vision for many years. With my business partner Harmeek Singh, the owner and founder of Plan b Group, bSocial was set up as the publicity vertical of Plan b Group.

I choose not to plan when I’m envisioning – not thinking about how it will be implemented before ascertaining what it is that needs to be done. Otherwise we remain confined to the limitations of our knowledge without exploring farther. After the initial thought, I simplify things, breaking them down into basic components. My approach has always been based on the basics of what, when, where, how and why? Once that is in place the rest is just detail. Business at bSocial is steered by a strong vision of the type of clients and projects we want to work with, the culture here, and quality of service provided. When developing concepts for clients I encourage my team to envision what an event or experience should look and feel like before drafting a plan. This enables us to come up with compelling ideas.

A major highlight was writing my very first television commercial featuring a major Bollywood star. The concept we presented won against major ad makers in the region. I co-scripted and creative directed the ad. Aside from that, Wedding Asia in 2005 was a successful event. However, it was not financially viable since the bulk of my sponsors withdrew their commitment owing to an earthquake that hit Pakistan one month before the event. I invested every penny I had to get the show rolling and it was a success, but I unfortunately wasn’t. And while people thought that it was not smart to invest in an inevitable loss, I felt otherwise. I franchised the concept out and its subsequent editions have been very commercially successful.

It may be an overused statement, but ‘do what you love and do it the way you love to do it’ holds true. Passion is the differentiator between good and great. Another ‘do’ is to say ‘no’ when you have to. I recall reading a tip given by James Altucher: “If something is not a ‘hell yeah!’ then it’s a no”. I fully subscribe to this. We only have 24 hours in a day and they cannot be wasted on people and activities that don’t deserve attention and – most importantly – add value. Don’t be afraid of taking risks. Not by being reckless, but by making calculated decisions that might be a few steps outside your comfort zone. Finally, don’t give up no matter how many times you have to re-start. The sense of accomplishment when one’s vision comes to life is immensely gratifying.