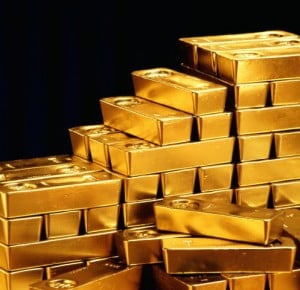 Gold hovered near a six-month high on Tuesday as investors stayed put ahead of a German court ruling on the Eurozone’s rescue fund and the Federal Reserve’s policy meeting, while a weaker dollar lent support.

The Fed is expected to launch another round of quantitative easing at a two-day policy meeting starting on Wednesday that would provide a further lift for gold, which has climbed seven per cent over the past month on growing hopes for more stimulus measures.

The dollar wallowed near a four-month low against a basket of currencies after Moody’s warned during the previous session about a possible credit rating downgrade for the United States.

A weaker dollar boosts appeal of commodities priced in the greenback for buyers holding other currencies.

Investors are also eyeing a ruling by Germany’s constitutional court on the Eurozone’s new rescue fund. Legal experts polled by Reuters expect the court to rule in favour of the fund.

“The market has fully priced in a positive outcome from the German court,” said Nick Trevethan, senior commodity strategist at ANZ in Singapore. “It has also priced in fairly substantial expectations for QE.”

If the Fed announces an open-ended, non-sterilised policy, gold could rally past resistance at $1,765-$1,768. While a disappointing outcome could knock gold down towards $1,700, he added.

A Reuters poll of economists said there was a 60 per cent chance the Fed would launch another round of quantitative easing at the conclusion of this week’s meeting.

Participants in Asia’s physical market are also holding their breath ahead of the major events after the recent price rally encouraged sizable scrap selling, weighing on gold bar premiums in the region.

“The storm has calmed and now we are seeing ripples, which will last until the next wave comes,” said a Singapore-based dealer.

Holdings of SPDR Gold Trust, the world’s largest gold ETF, remained at a near six-month high of 1,293.138 tonnes by Sept. 11, up nearly three per cent over the past month.

Spot platinum rose to a five-month high of $1,610, supported by ongoing labour unrest in the platinum and gold industries in South Africa, the world’s biggest producer of the metal.