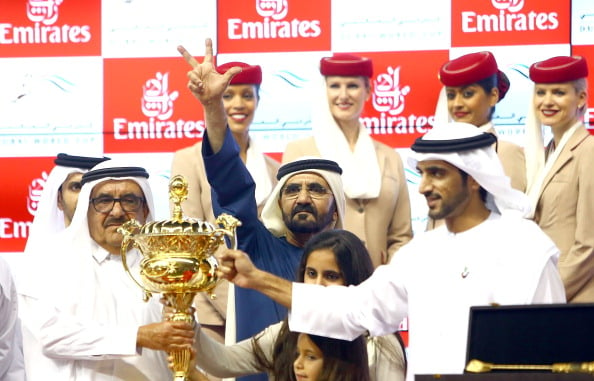 The 4-1 favourite Ruler Of The World was a disappointing 13th, finishing more than 16 lengths behind the winner.

The full field of 16 runners competed in the 2,000 metre contest, the world’s richest race, at the opulent Meydan racecourse in front of a crowd of about 60,000.

“It’s an amazing feeling and he just proved he’s the best,” De Sousa said of the seven-year-old African Story, a 12-1 chance who was fifth last season.

“He was very unlucky here last time when he banged his head in the stalls, but he has proved he’s the boy.”

Darley-bred African Story, trained by Saeed bin Suroor, held close behind leader Mukhadram, a 14-1 chance owned by the Dubai ruler’s brother Sheikh Hamdan bin Rashid al-Maktoum, for most of the race, surging past with 200 metres to go.

He crossed the line in a track record time of 2:01:61 minutes with De Sousa standing up in his irons, beating the previous 2012 record by Monterosso by more than a second.

“He jumped out of the gate so smart, I just had to squeeze him and ask him to be handy but he just responded to every question I asked him,” De Sousa told reporters.

“It was a perfect race for me. I was travelling at the second place just behind the leaders and he gave me the feeling he was happy to be there,” he added.

The final race compensated Godolphin for a lack of winners in the previous races on Saturday.

Suroor said he felt pressure after his horses were beaten by foreign rivals, including from Hong Kong, Japan and Ireland, earlier on Saturday’s card but the trainer added that he had been confident African Story would make up for the drought.

“African story was flying really. It is a brilliant result,” he told reporters.

“I talked to Sheikh Mohammed 10 days ago and he asked what do you think about our chances. I told him African Story was the horse. I always believed this horse would win the World Cup,” he said.

Godolphin’s reputation suffered a blow last year when its former trainer Mahmood al-Zarooni, who saddled 2012 World Cup winner Monterosso, was banned by the British Horseracing Authority after being found guilty of administering anabolic steroids at his stables in Newmarket.

Favourite Ruler Of The World, the Epsom Derby winner who made headlines after Qatari royal Sheikh Joaan bin Hamad al-Thani bought a 50 per cent interest in the horse in a last minute deal, failed to make any impact on the race.