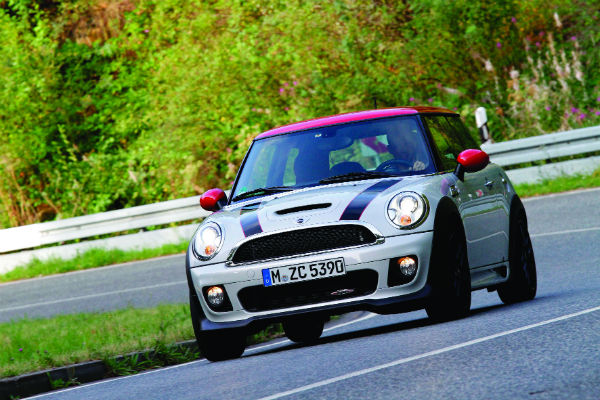 The Mini is not a car you would normally associate with Dubai, a city where most cars resemble the size of small houses, their hulking bodyworks blocking out the sun as they roll up alongside you.

But the German-made car, steeped in British history, has every right to feel proud of its compact size and is more than a match for the UAE’s oversized road dwellers.

With its mix-match colour coordination — the roof pairing with the wing mirrors and brake calipers, often in alarmingly bright colours such as ‘chilli red’ — the Mini John Cooper Works (JCW) Hatch drew more attention and glances from passers-by than most cars I have tested.

But let’s come back to its aesthetic features later, because what this car is really about is the fun it is to drive.

If you ever wanted to take a go-kart off track and onto the road, this is as close as you are likely to get.

The steering can be described in a similar fashion to its acceleration: nippy; the smallest of twitches sending the car darting around like a small, hyper animal. It’s likely to feel too sensitive to some drivers but it reaffirms the feeling you’re behind the world’s biggest go-kart.

For a car brand that was a British icon in the 1960s, the interior of the 21st century Mini JCW is as close to the inside of a spaceship as you’re likely to experience.

Metallic switches operate the windows and electric roof while another lets you take your pick from an array of luminous colours that light up the interior.

With BMW as its parent it’s not surprising that the navigation set-up is a mirror image of the iDrive operating system. However, bizarrely, it seems to work better in the Mini, the ultra-modern functions feeling more at home in the shuttle-like cockpit.

In what could be a throwback to its history, the car doesn’t succumb to every modern, electrical component where possible, as so many manufacturers today are guilty of doing.

The seat functions are split 50/50 between electric buttons and manual knobs and the old school lever handbrake is still there, to encourage hand-brake turns no doubt.

What this car is then is pure fun. Since its rebirth 13 years ago, the Mini has undoubtedly been a cool car. But who knew it was this exhilarating to drive? Unless you step inside one, you’ll only find that feeling on the go-kart track.