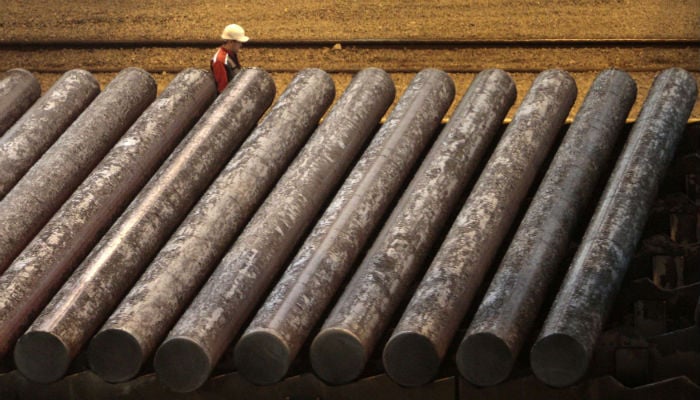 Global demand for steel, used in car making and construction, will slow next year because of weaker consumption growth in China and uncertainties from the European debt crisis, the World Steel Association said.

World steel consumption will grow 2.1 per cent to 1.409 billion tonnes this year and 3.2 percent to 1.455 billion tonnes in 2013, the World Steel Association (Worldsteel) said on Thursday. That compares with 6.2 per cent growth last year.

“The outlook is clouded by uncertainties subject to a number of risks. We expect the situation to gradually improve,” Hans Jurgen Kerkhoff, chairman of Worldsteel’s Economics Committee, said at its annual conference in New Delhi.

Steel consumption in China, the world’s largest producer and consumer of steel, will grow less than previously expected in 2012 and 2013, to 639.5 million tonnes and 659.2 million tonnes, respectively.

China has experienced a worse-than-expected slowdown in demand this year after more than a decade of steep consumption growth, exacerbating the industry’s outlook.

“Steel demand in China is expected to grow slower as both the construction and export sector have weakened considerably,” Kerkhoff said.

“We expect steel demand could accelerate next year on the back of fiscal stimulus.”

Worldsteel expects apparent steel consumption in the European Union to contract 5.6 per cent this year to 144.5 million tonnes as the region’s sovereign debt problems continue to drag on the area’s economy.

Steel use is expected to expand in Japan, the second-biggest steel producer, by 2.2 per cent this year because of reconstruction efforts in the wake of the March 2011 earthquake and tsunami.

But that may decline 2.9 per cent next year as companies struggle with a strong yen and falling exports.

“In the U.S., apparent steel use has grown this year due to improvements in the construction sector, a better-than-expected development in the automotive industry, and expanding energy production,” Kerkhoff said.

The Middle East and North Africa will see steel consumption grow 4.9 per cent this year after a two per cent drop last year following political turmoil that disrupted manufacturing activity in the region.

Worldsteel expects growth there to accelerate further in 2013, with apparent steel use up 6.7 per cent to 66.9 million tonnes.