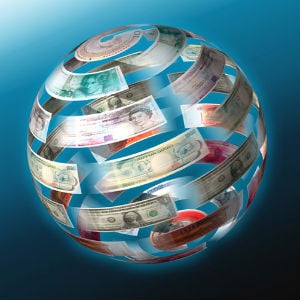 International migrants are sending more than $500 billion back to family members each year, almost triple the figure since 2000, providing a major economic boost to less-affluent nations, a Pew Research Center study shows.

A rising share of migrants live in high-income countries. The US, by far the most common destination, is increasing in popularity. It has a fifth of the world’s migrants, up from almost a sixth in 1990, according to the report released today. The US is the largest source of remittances, sending $123.3 billion in 2012, the Pew analysis of World Bank data shows.

Seven in 10 international migrants — roughly 160 million people — live in higher-income nations, those with the equivalent of an average per capita income of $12,616 or higher, up from 57 per cent in 1990, the analysis shows.

“Migrants are moving out, but they are also moving up,” said Phillip Connor, one of the authors of the report. “It’s not necessarily people from the lowest-income country groups that have been more likely to move in the last quarter-century. It’s more of that middle tier. There’s this movement from middle to high.”

The report found that high-income countries, many of them in North America and Europe, may appear increasingly attractive to modern migrants from places such as India and Mexico, whose principal reason for moving is to pursue economic opportunity.

The analysis, which comes as legislation to revise US immigration policy is stalled in Congress, underscores the central role economic conditions play in the flow of immigrants.

The report defines migrants as those living for one year or longer in a country other than where they were born. Many foreign workers and international students are counted under that definition, as are refugees and undocumented immigrants.

The US and Russia easily remain the top two destinations, while Germany has risen to third from sixth in 1990.

The number of immigrants in the US doubled from 23 million in 1990 to 46 million in 2013. During that time, no other country has come close to the number of foreign-born people living within its borders. Second-ranked Russia had about 11 million immigrants in both 1990 and 2013.

Once they move across borders, migrants often send money, known as remittances, back to families in their countries of origin. Remittances account for an average of eight per cent of the gross domestic product of low-income nations, Pew said, basing its analysis on World Bank data.

Immigrants increasingly were born in what the World Bank designates as “middle income” countries, where per capita annual income is between $1,036 and $12,615. About six-in-10, or 135 million, were born in such countries, compared with less than half of all migrants in 1990.

Among the middle-income countries, India, with $71 billion, China, $60.2 billion, and the Philippines, $26.1 billion, received the most annual remittances.

Even with the growth in recent decades, the foreign born as a share of the total US population is considerably lower than in many other nations. About 14 per cent of the country’s population in 2013 was foreign born, a smaller share than in Australia, with 28 per cent, and Canada, 21 per cent, Pew said.

The proportion of migrants in the US is also substantially lower than in some countries in the Persian Gulf, where the vast majorities of their populations are foreign-born workers. Citing United Nations’ data, Pew said 84 per cent of the population in the United Arab Emirates is foreign born, while 74 per cent in Qatar are.

In the US, the regional origins of immigrants have become more concentrated in recent decades, the study said. Fifty-five percent of all migrants living in the US are from Latin American and Caribbean countries, up from 47 per cent in 1990, Pew said.

Prospects for passing immigration-law changes have languished in Congress amid partisan battles over spending and health care. The House Republican majority has rejected a comprehensive plan passed June 27 by the Democratic-controlled Senate. The chances for enacting a law by year’s end dimmed after House leaders said they would consider a series of bills instead of one comprehensive measure.