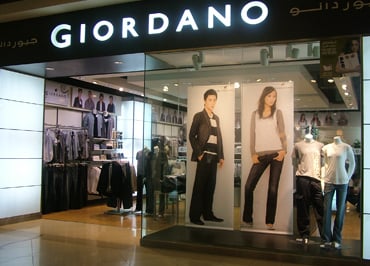 The fashion chain’s new stores will be operational by 2015 bringing its total tally in the region to 300, the company said.

In the UAE, Giordano is set to open stores in Fujairah’s LuLu Mall, Capital Mall and Yas Mall in Abu Dhabi along with outlets in Dubai’s Shindagha Centre.

The retailer’s other outlets will be spread across Saudi Arabia, Armenia, Yemen, Sri Lanka, Bahrain, Pakistan, Georgia and Iran.

Giordano is also aiming to expand its presence in the virtual world by growing its e-shopping network and deliveries to the GCC within the next six months.

“We are expanding our reach through the various digital and social media channels. We already launched e-commerce in the UAE, which is a growing part of our total sales, and will expand our e-commerce site across the GCC this year.”

“Giordano is relentless in pursuing new markets as we continuously innovate and evolve our products and image to best fit the markets,” said Chugani.

Dubai’s retail sector grew strongly in 2013 with a number of mega malls in the region undergoing a facelift.

Over 25 new retail brands opened in Dubai in 2012, according to CBRE.

Clothing labels such as Abercombie and Fitch set up base in the emirate in 2014 while its sister label Hollister will open later this year.