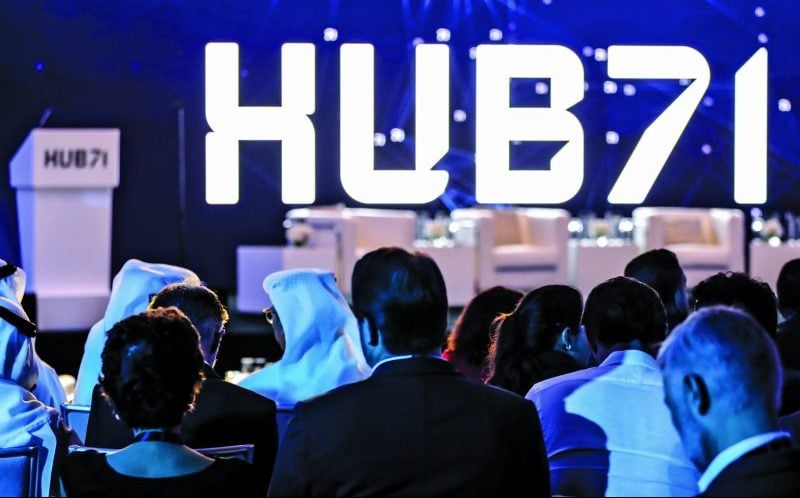 Hub71 was launched to great fanfare in March, with the Abu Dhabi government subsequently pledging a Dhs535m co-investment fund to be administered by the Abu Dhabi Investment Office, and a roster of partners signing up to bring expertise of various forms to the project – Microsoft, Mubadala, SoftBank Vision Fund, and Abu Dhabi Global Market among them.

The landmark initiative is being touted as a vital component of the emirate’s far-reaching Dhs50bn Ghadan 21 – a series of reforms and projects that will seek to hasten Abu Dhabi’s journey to becoming a leading knowledge economy.

And according to the head of the new facility, Mahmoud Adi, Hub71 will have a very specific role to play.

“In the last 47 years, Abu Dhabi has been building global partnerships and networks to become the hub between the East and West, with its world-class ports, universities, businesses and industries. Now we need to build on this solid foundation, not only for Abu Dhabi, but for the UAE and the wider region.”

According to MAGNiTT, the UAE continues to be the largest hub for new businesses across the Arab region, accounting for more than 35 per cent of regional start-ups.

And Adi argues that “by reducing the barriers for start-ups, such as set-up costs and improving access to funding, we’ll build a more vibrant tech ecosystem with more start-ups that are born and bred in Abu Dhabi”.

Open to “any tech founder with a great idea”, Hub71 welcomes entrepreneurs from across the world to join the new and growing community. The only stipulations are that their start-up must have at least three employees and a tech focus.

Those start-ups that make it through the door will be given an experience that is designed to help them overcome typical start-up challenges.

Adi cites access to funding, access to regulatory flexibility, and access to opportunities in the market as three key growth factors needed for new business to succeed, and explains that it is Hub71’s mission to surmount these hurdles.

“This 360-degree approach will be what sets us apart from other tech hubs, giving start-ups more opportunities to succeed in this competitive market.

“Hub71 is unique as it brings together a network of investors and strategic partners such as Microsoft, Mubadala, and SoftBank Vision Fund. Part of our core offering is building programmes and opportunities to network, develop your skills, gain mentorship, collaborate, and pitch for funding.”

“Building an organic ecosystem of investors is key to the economic accelerator programme Ghadan 21, because it helps the private sector create value within our economy,” explains Adi.

“To supplement, ADIO has pledged that it will co-invest with start-ups who have already received their first round of funding.

“We’re excited to see what kind of investments and deals will come from ADIO’s co-investment fund as there are great start-ups to be found right here in Abu Dhabi. There’s never been a better time in this region for both start-ups and investors, made evident with the 31 per cent increase in total funding, and 13 per cent increase in the number of deals made in 2018, compared with the year before.” 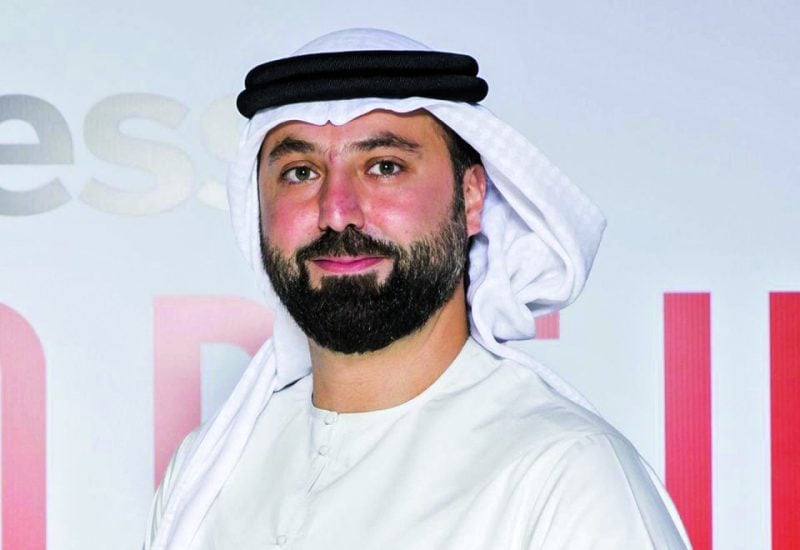 The new hub is an integral part of Abu Dhabi’s wider Ghadan 21 initiative, established to speed up the emirate’s transformation into a leading knowledge economy.

The Dhs50bn project was announced last year by the Crown Prince of Abu Dhabi and Deputy Supreme Commander of the UAE’s Armed Forces, Sheikh Mohamed bin Zayed, and entails a series of reforms aimed at encouraging investment, creating jobs, fostering innovation, and more.

There will be 50 initiatives under the Ghadan 21 umbrella, focused on business and investment, society, knowledge and innovation, and lifestyle.
And with plans to host more than 100 high-growth tech start-ups from various sectors by 2022, Adi is excited by the role Hub71 will have in fulfilling the aims of Ghadan 21, as well as its wider impact.

“In the long-run, we hope that Hub71 is the catalyst for collaborations between academia, start-ups, investors, corporations and technology companies,” he says.

“This enables Abu Dhabi and the UAE to be centre-stage for digital and technology innovations with major economic and social impact. There are so many questions that technology can provide the answer for – so many sectors that are yet to be created through AI and technology.

“Look at ride-sharing and the big business of big data – all within the last 10 years. Multi-billion dollar businesses like Uber, Careem, or Lyft, or companies like WeFox – a digital marketplace for insurance which uses data to reduce premiums and risk. These are both original and disruptive. We are only at the beginning of what technology will bring us in terms of job creation and sector diversification, as well as reclassifying tech investments from ‘alternative’ to mainstream.

“It all boils down to how we make the most of these opportunities. It is our mandate to support this high-growth area through cross-industry partnerships, youth empowerment, and entrepreneurship programmes, as well as working with Emiratis to get more citizens employed in the private sector – giving people the tools to start their own tech business, and fulfilling the UAE’s national brand as a beacon for technology and innovation.” 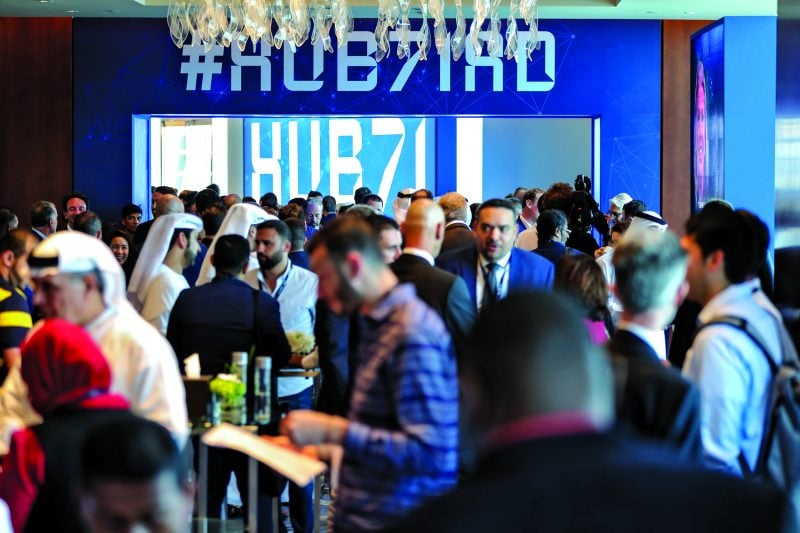 With its aforementioned list of high-end partners, Hub71 appears to have a foolproof infrastructure – each member bringing a specific specialty to the table.

Mubadala Investement Company will serve as the hub’s delivery partner, offering investment and technology expertise, as well as access to its global network, and will also be an active investor.

On the back of its recent launch of Azure cloud services in the UAE, tech giant Microsoft will help start-ups access high-performance computing, cloud-based technologies, and cutting-edge innovation in Abu Dhabi. It will also help Hub71 design workshops and programmes to upskill developers, facilitate knowledge transfer, and provide mentorships.

SoftBank Vision Fund will be a major investor in the hub’s start-ups, and will bring some of their global tech companies to Abu Dhabi, allowing them to expand in the region by using Hub71 as their launchpad.

And Adi says that advanced talks are being held with Abu Dhabi Global Market to help tenants’ ease of doing business – primarily by “reducing the time and simplifying the process of getting a business license and visa to operate in the ADGM”.

He also says they are working closely with the Financial Services Regulation Authority “to streamline FinTech start-up application processes here at Hub71, creating a regulatory ‘sandbox’ environment to test products and services through ADGM’s RegLab”.

It’s a set-up that Adi believes can become a model for similar initiatives in the world.

“We’ve spoken to start-ups, founders and investors from all over the world; we’ve had long and honest conversations with our partners and stakeholders; and we’ve spent time distilling what we think is essential for building a successful, supportive, and thriving ecosystem for early-stage tech companies, no matter where they come from.”

The initiative’s head does, however, point out one aspect that puts Hub71 at a distinct advantage over other markets: Geography.

“We’re lucky because we have a great foundation to build on,” he says.

“Abu Dhabi is already home to great talent from over 200 countries. It is a mobile-first market with loads of well-established industry players; it’s strategically located as the bridge between the East and the West, and on the doorstep of the world’s most exciting emerging economies.

“In other words, it’s the perfect test-bed for ambitious start-ups and established tech companies alike.”

And in closing, Adi adds there is a bigger picture that cannot be ignored – the role of the government.

“Where else in the world do you find a government that’s actively listening, actively investing in technology, and actively changing with economic and social needs?” he asks.

“We have here a government with a track record of achieving the vision it sets out, and much more. It is a great example of public-private-partnership in the making.

“The Brits may have invented the term, but we’re confident that the Emirates opitimises the essence of what it means to work in true partnership.”