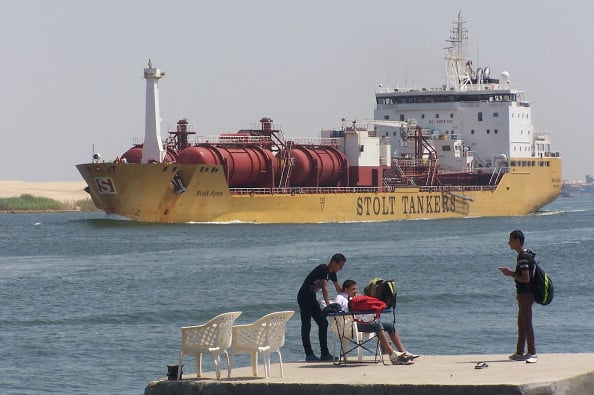 Egypt has gone from fuel famine to glut thanks to gifts from Gulf monarchs since the army removed the Islamist president in July – and that is giving the state oil company and foreign traders new headaches.

The Egyptian General Petroleum Corp. (EGPC), facing rising fees for delaying tankers as gift cargoes fill its ports, has begun to cancel or postpone contracted purchases. Traders have, for now, lost one of their best customers in the Mediterranean and some say the confusion has put them off dealing with Cairo.

Chaos in Egypt’s fuel supply chain that left drivers fuming in long lines at the pumps played a part in popular protests that preceded the military takeover. Now Egypt’s oil import terminals are so crowded that some tankers have been lying off Alexandria and Suez for two months, running up bills.

EGPC chairman Tarek El Molla told Reuters last week that he was giving priority to discharging cargoes donated as part of aid packages from Saudi Arabia, Kuwait and the United Arab Emirates. Delays to shipments ordered on the open market are incurring penalties, known in the shipping trade as demurrage.

“Contracted cargoes are waiting on the water,” Molla said. “So we started telling them to please postpone, please cancel.”

Traders say EGPC has been failing to issue the letters of credit, or L/Cs, needed to finalise payment before unloading, creating delay and uncertainty about deliveries that is making it difficult for firms to hedge their trading books:

“It’s pretty disastrous for anyone who has shorts into Egypt,” said one, referring to traders like himself who have a contract to supply Egypt. “They keep saying ‘No L/C, no L/C’. But there is no incentive to get one because of the donations.”

That trader waited nearly two months to discharge a gasoline tanker in early October and does not intend to send more product for the time being. Some gasoline tankers from major trading houses and major oil companies are still lying off Egyptian ports since arriving in August and September.

An international oil major is among those to have cancelled its gasoil deliveries to Egypt for the remainder of the year, a source familiar with the matter said. It was also due to supply gasoline but its August delivery is still waiting off Suez.

BP was the only major oil production company among the main winning bidders of Egyptian gasoil purchase tenders into Alexandria and Suez for the second half of 2013. It declined comment on whether it had cancelled deliveries.

Additional demurrage will also add to EGPC’s rising debts to international energy companies. Some traders have not been repaid for delays that occurred before President Mohamed Mursi and his Muslim Brotherhood were pushed from power. And Cairo is already under pressure to pay back over $6 billion it owes to foreign upstream producers.

Many Gulf rulers are suspicious of the Muslim Brotherhood, which has international affiliates across the Arab world. They were disturbed by Mursi’s election last year and have welcomed the new, military-backed government.

Saudi Arabia has become the biggest fuel supplier to Egypt, sending gasoline and gasoil as well as cooking and heating gases like propane and butane. It has been supplying the bulk Cairo’s gasoline needs since August, traders said, to the extent that Egypt does not need to import any more.

Saudi Arabia is providing some propane and butane. Kuwait and the Emirates do not, he said. All three are sending gasoil.

The Emirates started sending $1 billion of fuel products in July as part of a $4.9-billion agreement.

Kuwait has allocated some five million barrels of oil products to Egypt for the August-December period, a source familiar with the matter said, equating to around 130,000 tonnes a month.

Kuwait is also delivering two million barrels of crude oil per month, Molla said. This is up from about one million barrels per month, delivered erratically, during the year Mursi was in office. That has allowed Egypt to increase its naphtha exports as it can refine slightly more, one naphtha buyer said.

But while Egyptians can enjoy the period of plenty, underlying problems have not been dealt with. Little has been done to reduce the 20 per cent of state spending that goes on fuel subsidies, which many economists say are inefficient.

Among other side-effects of the flood of donations has been disruption for Egypt’s refineries.

Already short of crude due to the Mursi administration’s budget problems, Egypt’s biggest Mediterranean refinery, Midor at Alexandria, is now struggling to buy more on the market, traders and Molla said.

Before the Arab Spring uprising of 2011, traders would make part of their return for selling crude to Midor by selling some of the resulting refined products to local Egyptian buyers.

But with that once lucrative market awash with gifts from the Gulf, tenders from Midor for crude reprocessing deals have not been filled, traders said. Midor declined comment.

“(Midor) is not doing well because it not running at 100 percent of capacity,” the EGPC’s Molla said. “Now we are trying to get some solutions in coordination with Midor and some bank facilities support to get them some crude.”

He declined to give details but traders close to the refinery’s business said it was running at about 60 per cent capacity, with a blend of crudes not best suited to its needs – raising a risk of technical problems at the plant.