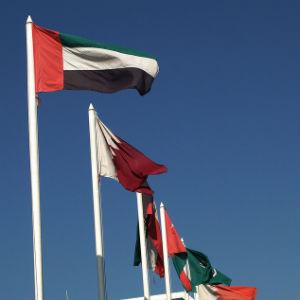 Gulf Arab countries failed to agree on further integration on Monday after a high-profile summit in Riyadh.

Gulf politicians had played up the idea that the Riyadh meeting would establish closer union between Bahrain and Saudi Arabia.

But Saudi Foreign Minister Prince Saud al-Faisal, speaking after the two hour summit, told a news conference that talks on a possible union of six nations had been postponed until the next meeting in Bahrain in December.

“Leaders of the Gulf Cooperation Council (GCC) have approved the call for a commission to continue studying in order to present final results (to a coming summit),” he said.

“The issue will take time… The aim is for all countries to join, not just two or three. … I’m hoping that the six countries will unite in the next meeting.”

The union calls for economic, political and military coordination and a new decision-making body based in Riyadh, replacing the current GCC Secretariat.

Speaking about Bahrain, the veteran Saudi minister added: “There was no step to have a special relationship between Bahrain and Saudi Arabia, although both countries would welcome closer association. We’re in full cooperation with all Gulf states to come up with the union.”

He said that Gulf leaders had agreed to sign a deal struck by interior ministers on closer security cooperation and that ministers would work “day and night” in economic, political, security and military committees set up since a summit last December to prepare the ground for union.

“Almost everybody can say in principal that they approve of this idea, but as far as I can tell, Saudi Arabia and Bahrain are the only two countries that find it particularly attractive,” said Gary Sick, professor of Middle East politics at Columbia University.

“We look forward today to the establishment of the Gulf Union,” said Bahrain’s King Hamad in a statement released by Bahrain’s state news agency when he arrived in Riyadh.

But not all Saudis think integration is a good idea. “If we join with Bahrain we risk importing their problems,” said Abdullah al-Shammari, a Saudi political analyst.