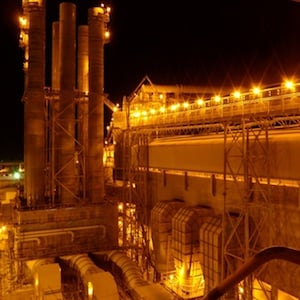 Total investment in the GCC’s aluminium industry has reached $14 billion to date, according to The Gulf Aluminium Council (GAC).

GCC governments made a strategic decision as early as the 1970s to investigate the potential of aluminium.

Bahrain’s ALBA (Aluminium Bahrain), blazed a trail, becoming operational in 1971. Dubai followed, bringing Dubai Aluminium, or Dubal, online in 1979, although it would be 20 years before its real potential would be achieved.

The last four years have seen a flowering of the GCC’s potential, with Oman, Qatar, the UAE and Saudi Arabia bringing further assets to the table.

Daylami said the GCC is producing 3.5 mtpa, which is around eight per cent of the global total, and expects that share to reach 10 per cent of the total worldwide by 2020.

“I would say the GCC’s share could reach 10 per cent, but after that I don’t know. The Saudis could double production if they had the gas. So could Oman,” he told Gulf Business.

The GCC is faced with the need to stimulate increased downstream demand. More of the same will not work, says Daylami.

“Most extruders are not interested in big quantities of primary aluminium. New industries are required to cater to different demand, such as trains or cars,” he said.

“Railways, which are undergoing massive regional investment from Kuwait to Oman, could work if a carriage manufacturing plant was set up in the Middle East, as these use up more primary aluminium than cars, but he admits that’s unlikely, as Europe would be a likelier location.”

Sari Alabdulrazzak, consulting manager at Deloitte Middle East, said: “There is a lot of potential for downstream development because you have a lot of available domestic aluminium to tap into. It will happen: if there is potential in this market, they will be more than happy to support it.”

As GCC railways take off, there is a chance to direct aluminium their way. “For railways, that mainly means power cables. You need companies to provide connectivity. But most of this is imported.”

Daylami said the advent of rail projects may boost the sector, but only to the extent that an international carriage manufacturer imports GCC product, which is by no means inevitable.

Similarly, infrastructure projects like the 2022 World Cup are not a “killer application” for aluminium, and the truth is that the best hope for sales lies with electricity cable manufacturers.

Certainly, increased aluminium use in the region would be a healthy economic driver. The industrialised world uses 20kg per capita per year, China 12kg, Brazil 5kg, and Indonesia 2kg, says GAC.