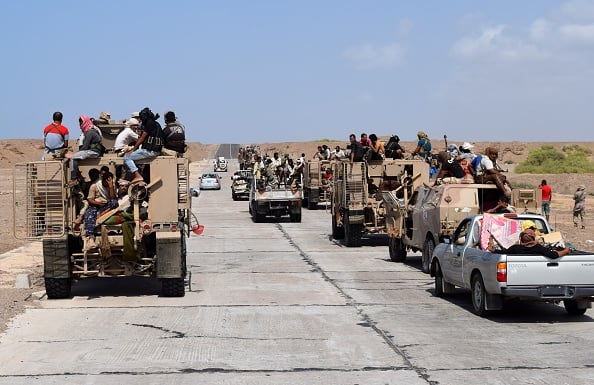 Perim Island may be a small lump of windswept volcanic rock at the entrance to the Red Sea but its capture by Gulf Arab forces from Houthi fighters was a welcome victory for Yemen’s government and its allies.

Gulf Arab troops swooped in from air and sea last week to take back Perim, which sits on one of the world’s most important sea lanes.

The successful action denied Iran, the Houthis’ main ally, a symbolic foothold astride trade routes as the Saudi-led Gulf Arab states and Tehran vie for influence across the Arab world.

“The island has now been completely secured by the coalition and the resistance forces from among its people,” Rami Fahmy Mayuni, a tribal chief of the island’s original inhabitants and commander of its militia fighters, told reporters flown to Perim by United Arab Emirates forces for a tour.

In 2013, more than 3.4 million barrels of oil per day passed through the 20 km (12 mile) wide Bab al-Mandab Strait linking the Red Sea to the Gulf of Aden, according to the U.S. Energy Information Administration, a big reason why Egypt and the United States vowed to defend the security of shipping there as the Houthis descended upon it in March.

The warring parties appeared to receive the message and oil tankers and cargo ships continue to heave along, untroubled by the ground combat grinding slowly up Yemen’s western coast.

The white-washed British colonial buildings of the island known in Arabic as Mayun, now looking like an abandoned movie set crumbling in the blazing sun, have witnessed more than one historic upheaval over the last century.

When the Red Sea linked British ports to the riches of India via the Suez Canal, its lighthouse kept vigilant watch on Yemen’s mainland for raids by the Ottoman Turkish empire until it collapsed after World War One.

When southern Yemen split from the British as a Soviet-satellite state, the authorities banished most of Perim’s 4,500 people to turn the site into a military base, a modest outpost of socialism set amid Africa and Arabia.

But some of the sons of these shark fishermen and shrimp netters have come back with their Kalashnikovs alongside high-tech Gulf forces to “liberate” the home turf whose strategic value has long captivated foreign powers more than its people.

“The Houthis planted dozens of landmines to hinder our ability to take it back. The battle was violent and took a couple hours, but the power plant is destroyed, and there’s no way to pump water,” Mayuni said.

A Yemeni gunman wearing a sarong held the Emirati flag stood behind him and Gulf troops prepared to fly out again by Blackhawk helicopter.

As combat raging throughout Yemen and daily air strikes have killed over 5,400 people throughout its war, hunger and disease have spread through the already impoverished nation.

The Houthis have condemned the coalition for alleged war crimes and say their seizure of the capital Sanaa in September and spread throughout the country was part of a revolution against a corrupt Yemeni government beholden to Gulf monarchies and the imperialist West.

In an interview with pro-Iranian al-Mayadeen TV channel, a leader in the group Mohammed al-Houthi denounced the Gulf forces as “invaders” and “an evil that’s spreading.”

“We consider the complete control taken by coalition and popular resistance forces over the Bab al-Mandab (strait) and the defeat of the Houthis as the beginning of the end of this renegade group and those backing them,” Sheikh Abdullah said in a speech before the United Nations on Friday.

While swathes of the country’s south and desert centre fell to the Gulf Arab alliance and its local allies earlier in the summer, the regional showdown fuelling the war in Yemen shows no sign of letting up.

“There was always this talk of Bab al-Mandab as being in danger, that missiles would threaten trade there someday – but it’s dusty, out of the way. It’s was a place where there were just a few tired soldiers and trucks smuggling alcohol,” Yemen analyst Farea al-Muslimi said.

“The military movement is important, yes, but it’s almost as if the fact that civilians die every day is forgotten in the middle of all these ‘big victories’ announcements.”