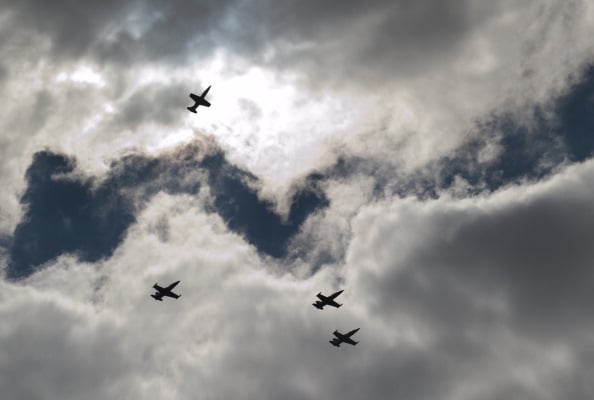 A GCC official has dismissed claims that the US-led air campaign against ISIL in Iraq and Syria has failed, following the capture of cities Ramadi and Palmyra.

Speaking at the sidelines of a meeting between the GCC’s foreign ministers and European Union officials, Qatar’s Foreign Minister Khalid Al Attiyah defended the coalition but admitted that military action has to be complemented with other efforts.

“The coalition is not failing but the air campaign is not enough,” Al Attiyah was quoted as saying in AFP.

“There are so many steps which we have to cooperate and coordinate together. To date, the campaign against terror is effective.

“One of them is to enhance and expedite the dialogue in Iraq, and in Syria it is to find a way out to save the Syrian people,” he said.

Earlier this week, the militant group took total control of a border crossing between Iraq’s Anbar province and Syria, further helping them to expand their presence in the region.

ISIL’s capture of the border crossing and the fall of Ramadi and Palmyra have drawn criticism about the effectiveness of the US-led air strikes against the hardline group.

Analysts have criticised the US of being too focused on containing ISIL rather than destroying the group. Many have also opined that the coalition might have to commit more resources than it originally planned.

Although US officials have reiterated that there is no immediate plan to launch a ground offensive, they have been vocal about their dissatisfaction with Iraq’s military force – an ally they count on to conduct ground operations.

In a recent interview with CNN, US Defense Secretary Ashton Carter said that the loss of Ramadi showed that the Iraqi forces had “no will to fight”.

He emphasised that the air strikes were effective but they were not a replacement for the ground defense that should be provided by the Iraqi military.

US military officials have also stated that they rated ISIL’s capabilities much higher than its predecessor Al Qaeda, indicating that any sort of military intervention will be long drawn out.

In a recent State Department briefing, a senior US military official said that it would take at least three years to completely degrade the radical group.