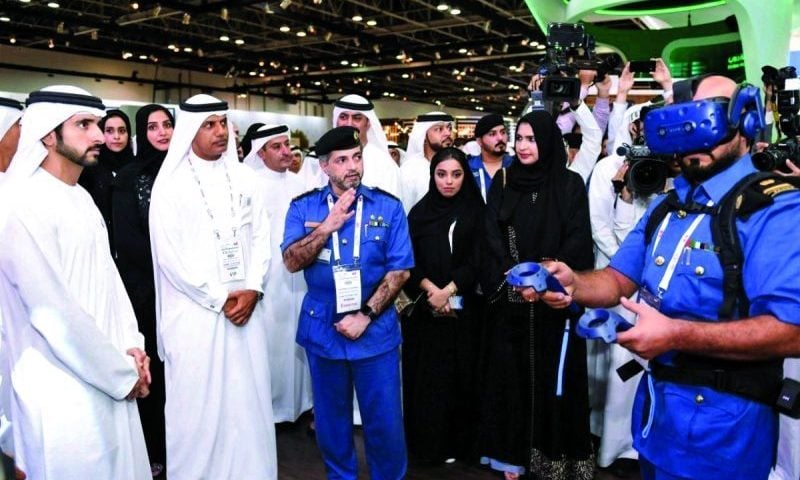 Defying dull market conditions in the region, the annual Gitex technology week in Dubai was bustling with activity this year, with tech giants and government entities displaying and announcing numerous new products and services.

According to organisers, more than 100,000 visitors trooped through the five-day tech extravaganza in Dubai World Trade Centre, which featured international speakers such as Sir Tim Berners-Lee – founder of the World Wide Web, over 4,500 exhibitors including more than 200 government bodies, and the third edition of the startup-investor event Gitex Future Stars.
Held under the tagline ‘Experience Urban Futurism’ Gitex had its fair share of future tech displays including the now-ubiquitous (and increasingly advanced) robots, a police hover bike, an autonomous taxi, an autonomous living space cabin, and ‘smart’ glasses for the blind, among others.

But looking wider, the move towards digital transformation is taking more concrete shape, industry experts at the event noted. Rather than just theorising about industry trends like cloud and AI, companies are now implementing those elements in their businesses, and starting to feel an impact.

The GCC market has been hit by a slump in oil prices in the last few years, with economic growth contracting 0.2 per cent last year, according to the International Monetary Fund (IMF).

While the region is anticipated to return to growth in 2018 and 2019, companies – especially in the private sector – have been more cautious with their spending plans.

“I think the market in general is under economic pressure but that is creating an opportunity for companies to really think what they can do with digital transformation that will help them grow in a stressed market,” opines Sayed Hashish, regional GM of Microsoft Gulf.

“What we are trying to do is increase competitiveness of companies by driving efficiencies, trying to get them to address their customers better, trying to decrease things like churn and seeing how they can streamline their operations.”

In the last 12 months, Microsoft has seen a month-on-month increase in business and interest from customers and partners on understanding and creating a digital transformation strategy.

In a bid to better serve the regional market, the company is also investing heavily in two new data centres in the UAE – in Dubai and Abu Dhabi – which are expected to be operational by next year.

According to Hashish, adopting new technologies invariably reduces investment and while parts of the market understand this, others remain apprehensive.

Accenture’s managing director and digital lead for MENA and Turkey Xavier Anglada agrees that macroeconomics affects the industry in a “lesser way” because customers now have the option to choose a model that is less capex intensive and offered more as a service.

“When it’s more as a service, it can be more optimised to actual demand – when it goes up and when it goes down,” he states.

“The reality is that the whole ecosystem has involved into a different consumption model, which adapts better. It doesn’t put people under too much financial strain,” he adds.

“The last 12-18 months has seen a bit of improvement, particularly in the service provider space, where we have seen a reasonable uptake on adoption of new technologies by providers,” he says.

Possibly the main factor that has highlighted the focus on digital transformation has been the aggressive push from regional governments to adapt new technologies such as artificial intelligence (AI).

According to a report released by PwC earlier this year, the economic impact of AI adoption on GCC economies is estimated to reach roughly $277bn by 2030.

The average annual growth rate of AI’s contribution to the GCC is expected to range between 29-34 per cent, with the UAE seeing the highest growth rate at 33.5 per cent. 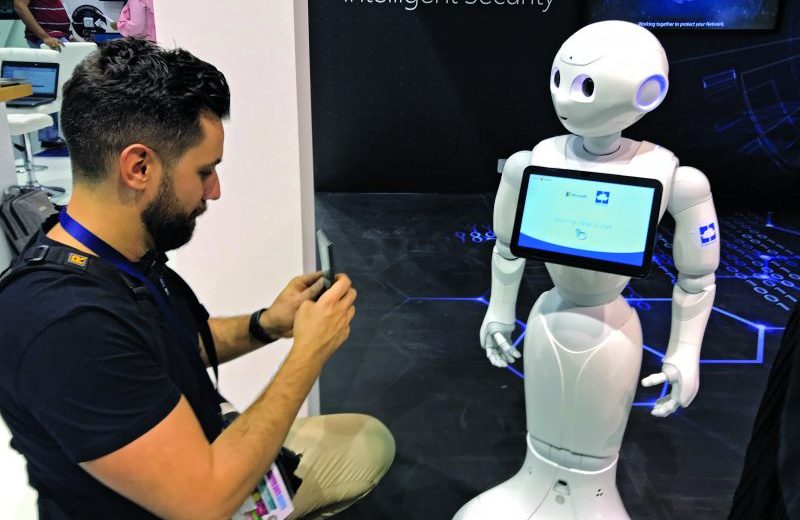 Not surprisingly, many of the announcements at Gitex came from government and public sector entities – especially in Dubai, as part of the emirate’s smart city agenda. Under its digitisation agenda, the Dubai government aims to be completely ‘paperless’ by 2021 – a goal that officials say it is on track to achieve.

“Today with all of the digital transformation that is happening in Dubai, we have all the enablement services, all the infrastructure to support us to reach to our goals and objectives of becoming a paperless government,” states Younus Al Nasser, assistant director general of the Smart Dubai Office and CEO of the Dubai Data Establishment.

The Smart Dubai platform – which has been created in partnership with telecoms operate Du, is now fully operational with several governmental entities already using it.

“We have all the data on the platform and we can show you how you can use utilise the data for the benefit of society,” says Jihad Tayara, VP ICT Commercial, Business Development ICT Solutions at Du.

“For example, a crowd management platform shows how people are gathering around the Burj Khalifa on New Year’s Eve, so this is a tool for congestion management, police and the Roads and Transport Authority (RTA),” he explains.

Another exhibitor who had a smart city display at Gitex – which drew interest from officials in Dubai – was Huawei Enterprise. The company’s smart city solution – which has been implemented in two cities in Saudi Arabia – includes a command and control centre that monitors the entire city.

The platform provides complete information about the city such as – average GDP, average age, average education level, how many fire alarm systems have been set up, how many are activated etc, explains Alaa ElShimy, managing director and VP, Huawei’s Enterprise Business, Middle East.

The platform, which is built on AI systems using cameras, can also provide traffic services and support on handling accidents.

“For any city that has already implemented bits and pieces, we can integrate all that into a single platform,” he states. 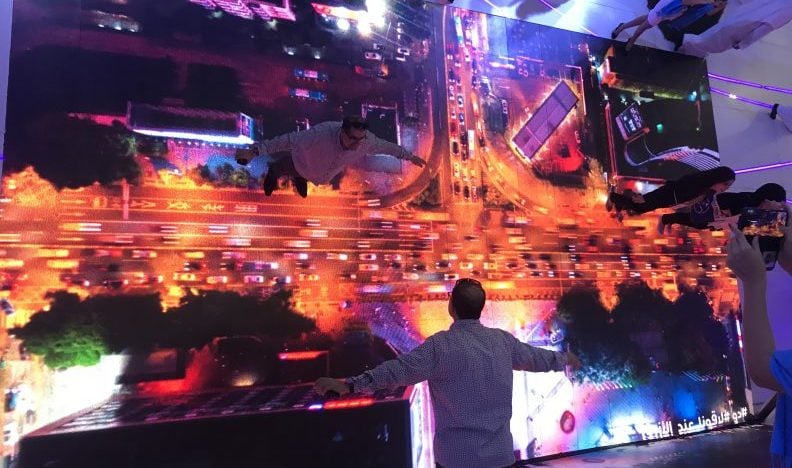 Dubai is also the first city in the world to launch a blockchain strategy for all government transactions with the initiative expected to be implemented by 2020. Adopting blockchain will help Dubai unlock Dhs5.5bn in savings annually in document processing alone, according to Smart Dubai.

“We have in Smart Dubai launched our first blockchain implementation on payments and reconciliation and we’ve seen the second also being launched on Dubai Land Department and a third implementation from Dubai Economic Development,” says Al Nasser.

“The city can see the benefit of it not only for government implementation but also for ecosystem creation. And more importantly we are becoming the global leaders and are sharing the knowledge of how such a technology can be implemented in a city.”

ConsenSys, which has collaborated with Dubai to work on the blockchain strategy, says it is important to understand how to leverage the technology since not every case lends itself to it.

“Typically blockchain can in a sense be applied to all sectors, all business and life aspects if you will. But we see a lot of interest from governments – what we call govtech – and we see a lot of applications in smart cities,” explains ConsenSys’ executive director MENA, Lina Hediah.

“When you’re talking about smart cities this spans not just government but also utilities, identity and private companies. But there are very real sectors that are going to benefit quickly from the technology such as payments and financial services, energy and telecommunications. Telcos today are redefining their go-to-market strategies and offering all kinds of blockchain services,” she adds.

Al Nasser stresses that it is imperative for all new technologies to actually touch people’s lives.

“Attractive cities are the ones that understand their people, which talk to you as a human and provide you with a service. We can all talk about blockchain and artificial intelligence but we need to understand what it means for an individual in Dubai and how it’s really transforming his or her life,” he asserts.

With the region moving steadily towards implementing new technologies such as blockchain, there is a strong need for clear cyber security regulation, say experts.

“Currently, only 40 per cent of the countries around the world have dedicated cyber security strategy so we have a long way to go,” states Karim Sabbagh, CEO of DarkMatter.
But he also warns that regulations should not be “too prescriptive”, considering the rapid evolution in the technology industry.

“You want to have more principle-based regulations and have the directives evolve with the way the technology is going to evolve. You need to keep it flexible and make the right choices,” he argues.

“The first thing is regulation preserving the privacy of citizens and residents. You need to provide security, defence and intelligence agencies with the ability to do their work without creating extraordinary burdens or exposures on companies. We need to strike the right balance,” he adds.

It is also essential that regulations follow proper standards that are understood and complied with across all industries. 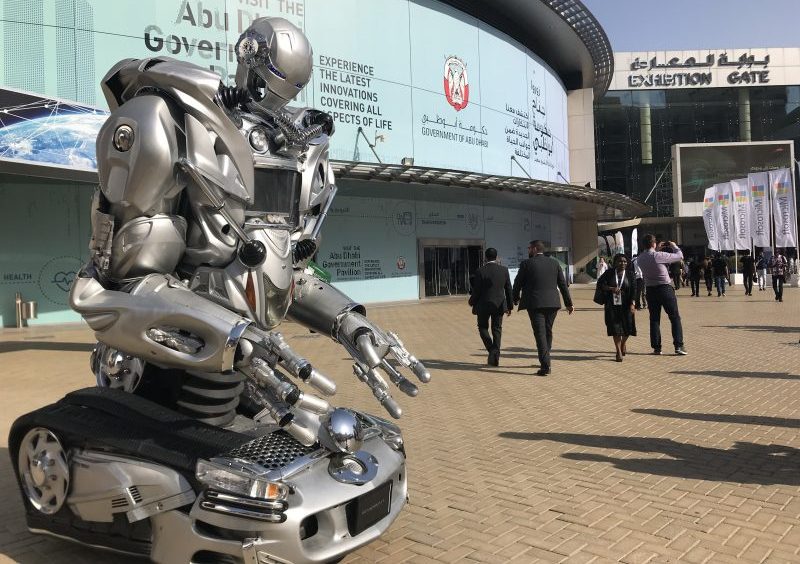 The technology landscape is growing and changing in the region with more maturity in the ecosystem and more maturity in customer engagement, says Ahmed Al Faifi, senior vice president and managing director at SAP Middle East North.

“Customers are now going for an end-to-end solution rather than a niche solution and looking to the bigger picture. They care about looking at the wider roadmap. They care about development and what you are willing to do in the future and they care a lot about support and about your capability in the region,” he says.

“We have strong digitisation in the region – mainly because of greater awareness but also due to governments pushing everybody to digitise and be more efficient and bring more transparency in their businesses. This will continue to be a good region for us,” Al Faifi adds.

Spending on the enterprise application software (EAS) market in the MENA region is set to reach $774.62m in 2018, indicating year-on-year growth of 6.3 per cent, market consultancy IDC said in a report released in October.

The market is projected to grow at a compound annual growth rate of 6.1 per cent over the 2018–2022 period, with GCC countries, particularly Saudi Arabia and UAE, continuing to dominate spending in the market as they push ahead with their countrywide digital transformation initiatives.

“Given the plethora of digital transformation initiatives underway across the region, the market for cloud-based EAS solutions will continue to expand in MENA, with government, transportation, healthcare, and utilities set to be among the fastest growing verticals in terms of EAS investments through 2022,” said the report.

But despite the strong potential, implementation will not be sudden.

“It will be gradual for sure – the coming two years will see very big impact, very big difference, very big progress but definitely the next 10 years are the big ones for AI,” says Huawei’s ElShimy.

With talk now starting to surface about quantum computers – the next big tech frontier – it certainly seems like Gitex has several busy years ahead.