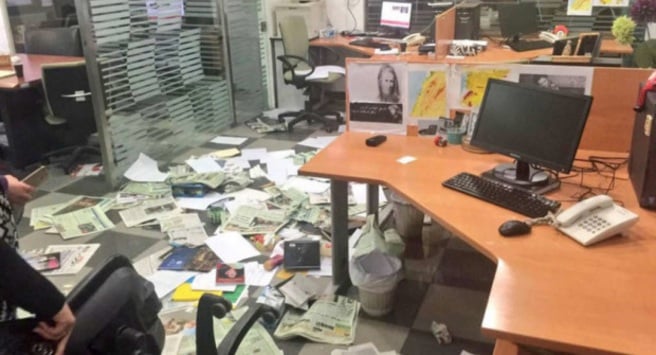 Around a dozen men raided the newspaper’s office after it published a cartoon on April 1 that offended Lebanese activists.

In a statement, Zayani called the attack “a cowardly act” and said it violated media liberties guaranteed under international laws.

“This cowardly assault does not reflect the stances of the Lebanese people who understand and realise the crucial role of Asharq Al Awsat in supporting Lebanon on the media level,” he said.

He added that he was confident that the Lebanese security authorities will arrest the perpetrators and bring them to justice.

Soon after the attack, Asharq al-Awsat released a statement saying it holds the Lebanese state “responsible for maintaining the safety of its office employees.”

The newspaper also defended the motive behind publishing the cartoon, which depicts a Lebanese flag with the text “April Fools… the Lebanese state” written over it.

“Asharq al-Awsat confirms that it respects the Lebanese… The cartoon aimed to cast light on the situation which the state (Lebanon) finds itself in, as a country which living a big lie caused by attempts to dominate it and distance it from its Arab environment, and to hinder the appointment of a president,” it explained.

The incident comes amidst growing tensions between Saudi Arabia and Lebanon after the kingdom criticised Beirut of being influenced by Iran-backed Hezbollah. Last month, Saudi halted deals worth $4bn for Lebanon and warned its citizens against travelling to the country.