Intel retained its position as the top global semiconductor vendor by revenue in 2020, followed by Samsung Electronics, SK Hynix and Micron (see table below). Intel’s semiconductor revenue grew 7.4 per cent, driven by the growth of its core client and server CPU businesses. 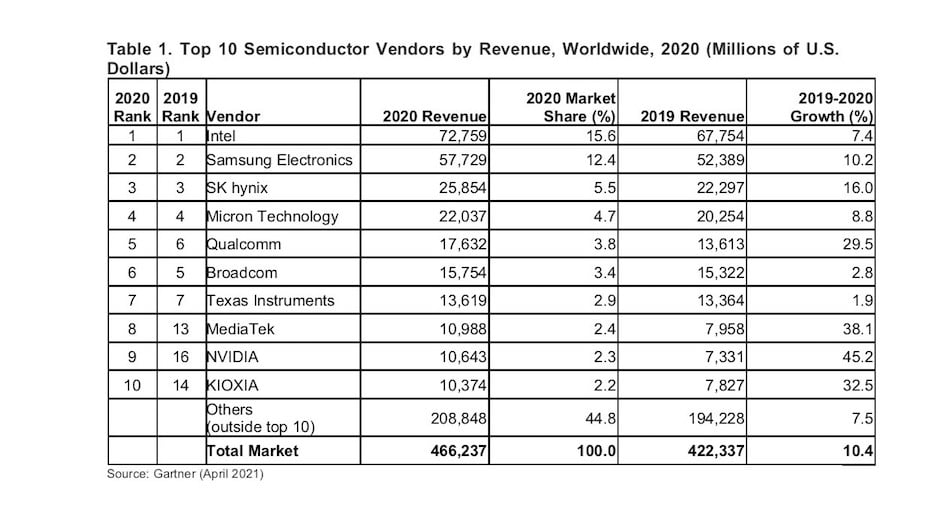 Overall, the top performers in the top 10 were Nvidia and MediaTek. Nvidia’s 45.2 per cent growth was primarily driven by the company’s gaming-related and data centre businesses. MediaTek’s revenue grew 38.1 per cent in 2020 driven by the disruption to Huawei’s business throughout the year.

Memory, which accounted for 26.7 per cent of semiconductor sales in 2020, was the second best-performing device category, experiencing a 13.5 per cent revenue increase. According to Norwood, memory benefited from the shift to home working and learning which fuelled increased server build from hyperscale vendors to satisfy online working and entertainment, as well as a surge in PCs and ultramobiles.

Within memory, NAND flash experienced the best performance with revenue growth of 25.2 per cent due to a shortage in the first half of 2020, the report added.