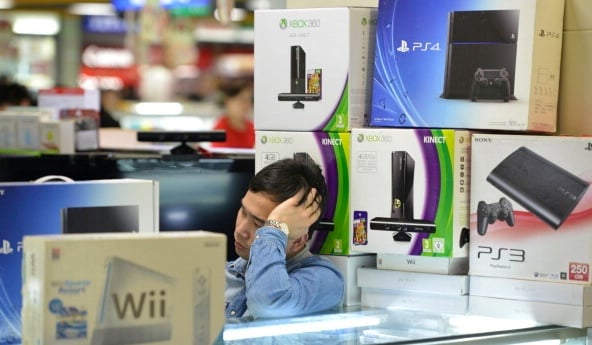 With millions of units sold between them, Microsoft and Sony are undoubtedly the main players in the global console market, estimated to be worth in excess of $27 billion.

The overall gaming industry, worth around $70 billion, is slated to grow even further in the coming years.

Since the introduction of the first Xbox in 2001, a year after the launch of the highly anticipated PlayStation 2 (PS2), Microsoft and Sony have been locked in a perpetual struggle for market supremacy.

But with the announcement of the latest sales figures from Sony, it seems like the Japanese firm has emerged as the current winner in the 13-year-long battle between the two titans.

Some might say that it is too early to judge – after all, it has been only nine months since the arrival of the PS4 and the Xbox One. Consider what happened with their predecessors: the PS3 came out a full two years after the Xbox 360, successfully neutralising the latter’s early lead and managing to finish with an impressive tie by the time the next-generation consoles arrived.

The fact remains that Sony is currently ahead in the numbers game. Over 10 million PS4s have been sold so far, as opposed to 5.9 million ‘shipped’ Xbox One units.

Microsoft is still tight-lipped about estimates of Xbox One units actually sold to consumers, leading many to suspect the obvious – the software giant has fallen behind by a large margin.

It hasn’t been an easy ride for the Xbox One so far. Various factors have impeded what was otherwise expected to be a successful run, including a botched marketing strategy, coupled with a bumpy international rollout (the Xbox One is available in only 13 countries so far, compared to 74 for the PS4) and a higher price tag.

However, considering the lifespan of consoles, Microsoft could potentially catch up, and possibly even move ahead of its Japanese rival. But with Sony’s early lead, such an outcome seems quite unlikely in the foreseeable future.