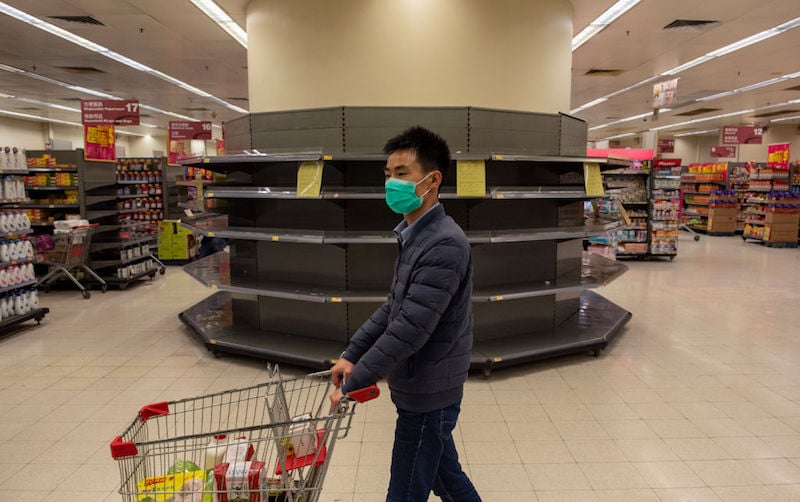 Finance leaders from across the world will gather in Saudi Arabia this week to discuss a global economy coming under increasing strain from the spread of coronavirus.

With the virus already shutting down commerce — and prompting the postponement of tech shows and sporting events — the Group-of-20 finance ministers and central bankers will be discussing a risk to growth that is growing bigger by the day and wouldn’t have figured in their outlooks at their last gathering. The meeting will kick off on Feb. 22 in Riyadh, although some attendance may yet be disrupted by the virus.

The broad policy direction for many of the world’s central banks and governments now hinges on one question: how will the Chinese government respond to the economic shock caused by the coronavirus?

The Communist Party’s elite Politburo has urged the nation to meet its economic targets this year, an imperative that could shake the government’s recent reluctance to fire up large-scale stimulus.

If it translates into an all-out loosening of monetary policy and a ramp up in government spending, key trading partners that have been slammed by the hit to exports, supply chains, commodities and tourism may see short-term pain followed by a rapid snap back.

International Monetary Fund Managing director Kristalina Georgieva on Friday suggested there may be a need for “synchronised or, even better, coordinated measures to protect the world economy.”

Much depends on which levers China pulls. Near-term options include further cuts to central bank funding rates and more tax relief to hard-hit sectors as well as flush liquidity for the financial system. The emphasis for now remains on not over-doing it, though there are signs the resolve is softening.

The People’s Bank of China could further cut the proportion of deposits banks must hold as reserves. Local governments are being allowed to speed up bond sales to fund infrastructure like highways and health facilities.

Real gross domestic product is now forecast to grow 5.8 per cent this year, according to the median result in a Bloomberg survey, down from 5.9 per cent last month. That would be the weakest in three decades.

The unknown is whether officials will really relax their rigid clampdown on borrowing in an economy where total debt is heading toward 300 per cent of national output, making financial stability a political priority.

“The key for China’s trading partners is not so much the composition of China’s stimulus but, rather, that the stimulus is tailored to reflect the features of the shock.” said Nathan Sheets, a former Fed official who is now chief economist for PGIM Fixed Income.

China’s factories are vital links in the supply chains for multinational companies. Hubei province, an industrial powerhouse with an economy the size of Sweden’s, remains in lock-down while a mix of curbs on factory production and travel remain in place elsewhere too, complicating the task of getting the economy back up to speed.

HSBC Bank economists led by Janet Henry estimate the hit to tourism revenue will be the biggest drag on Asia. They also highlight China’s role at the centre of the global supply chain for electronics will delay a nascent recovery after a prolonged slump.

The Asia-focused lender has cut its 2020 global GDP forecast to 2.3 per cent from 2.5 per cent on the back of the China effect.

Analysis by Tom Orlik at Bloomberg Economics shows that Australia, South Korea, Japan Singapore, Hong Kong and Thailand are among the most exposed in the region while Brazil, Germany and South Africa are high up the list of global vulnerability.

President Xi Jinping has stressed the hit to growth will be short term and has used opportunities like a half hour phone call with Malaysia’s Prime Minister Mahathir Mohamad to assure the fallout will be contained.

One worry: Because China is experiencing a supply side shock that’s upended production and distribution, a conventional stimulus such as lower interest rates or higher public spending may not be enough to turn things around, according to former IMF chief economist Olivier Blanchard.

“The effects on the rest of the world are likely to be mostly through the disruption of supply chains, and the effect on firms outside of China,” Blanchard said. “Much more so than the effect through lower exports to China, because of lower growth in China.”

Governments across Asia are already gearing up to respond.

Koichi Hamada, an adviser to Japanese Prime Minister Shinzo Abe, said more fiscal stimulus will be needed if the fall out worsens.

Singapore is poised to roll out extra spending, Malaysia will announce stimulus next month, while Indonesia plans faster spending.

Globally, policy makers including the IMF’s Georgieva Federal Reserve Chairman Jerome Powell say they are closely watching the virus fallout. Among emerging markets, Thailand, Malaysia and the Philippines have already cut their benchmarks and others may follow.

Which is why there’s so much focus on how China responds.

“I would guess the global policy response will be 3/4 on Beijing and 1/4 by the rest of the world,” said Gene Ma, head of China research at the Institute of International Finance.