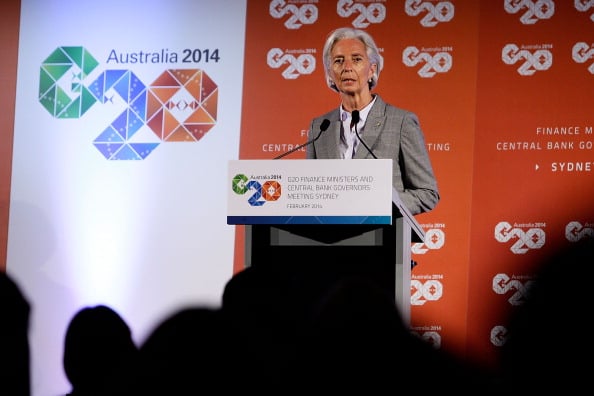 The Group of 20’s proposal to lift economic activity by two per cent over the next five years has so many holes in it, there’s no wonder it was the first official target that all members felt happy to agree on.

Each country has until November to come up with its own supposedly “concrete” plans, but there is nothing to enforce their implementation except the moral suasion of other members. The International Monetary Fund has said it will be watching for progress on the plans, but it has no power to compel or punish.

The target is also a moving one, as it is based on beating an estimate for growth which itself is just a best guess. Forecasting is by its nature a highly imprecise art and the IMF is forever revising its forecasts up or down. Predicting growth for the next quarter is tough enough, no matter over five years.

“We’re not even sure where we are now on growth. How will we be able to judge if these targets are being met?” said Michael Blythe, chief economist at Commonwealth Bank of Australia.

Indeed, the Germans were reluctant to sign up to any hard target at the G20, but accepted the growth goal because it was not binding. Others also stressed it was an aspiration, not a locked-in promise.

“The results of this process can not be guaranteed from politicians,” German Finance Minister Wolfgang Schauble said after the deal was signed on Sunday.

And financial markets took little notice of the agreement, instead focusing on Monday on the same concerns they had on Friday — the impact of the U.S. Federal Reserve’s taper of its stimulus and uncertainty over China’s economic performance.

For the G20, the prospect of higher growth is an incentive to help sell the need for structural reforms around the globe — take some hard decisions now, and end up wealthier and stronger in five years.

The IMF does have a laundry list of reforms that it says will boost growth and productivity. It includes everything from liberalising domestic service industries, to spending more on infrastructure, to attracting more women into the workforce.

Some are country specific, such as boosting private savings in the United States to improving healthcare and the social safety net in China.

But all are politically or fiscally difficult.

“Some of the reforms potentially have a big payoff but they tend to be unpopular and entail hard grind,” says Blythe.

“Take the aging of populations that so many countries are struggling with. There’s no way they can meet future pension obligations, but dealing with that is a politician’s nightmare.”

One theme running through many of the proposals was making it harder for workers to retire early. Australian Treasurer Joe Hockey who hosted the G20 meeting in Sydney, has started a “national conversation” about raising the retirement age toward 70, from the current 65.

Lowering barriers to trade is another much-touted reform, but the seemingly never-ending talks on the Trans-Pacific Partnership (TPP) show how intractable that can be.

Twelve countries are pursuing a trade deal that optimists have estimated could add nearly $300 billion a year to global income, but the talks are bogged down in disputes over everything from tariffs to patent rights to environmental protection.

Japan has become a particular sticking point as it tries to protect its rice, wheat, beef and pork, dairy and sugar sectors, all of which wield great political influence at home.

The world’s third-largest economy is a perfect example of how hard it will be to meet the G20 goals. Prime Minster’s Shinzo Abe’s so-called third arrow of reforms are exactly the kind of change recommended by the IMF, but they are yet to be launched and are meeting fierce opposition at every turn.

There has been scant progress on breaking the divide between well-protected regular workers and a growing army of temporary staff, while significant immigration remains a social taboo.

“In short, if there is a nice free lunch with plus-2 percent growth out there, why haven’t policymakers found it?” wondered Mark Crosby, an associate professor of economics at the Melbourne Business School. “It’s just not credible.”

Indeed, he argued that there was a good chunk of the world economy where the reforms being suggested would likely to lead to slower, not faster growth.

“How is China going to meet the target, particularly if it is able to achieve the switch from investment-driven to domestic-demand-driven growth which will lead to slower, not faster growth?” asked Crosby.

Still, he saw the aim of increasing infrastructure spending as admirable and said there could be ways to find new financing mechanisms that would be a modest spur to growth.