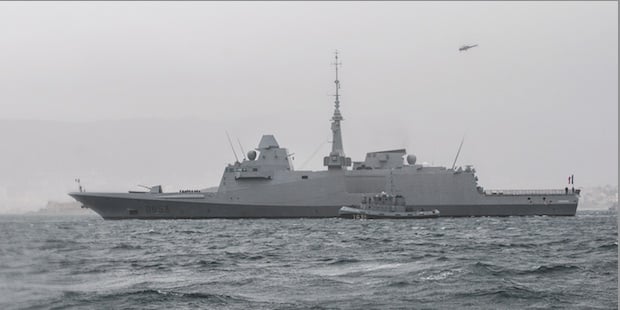 Geopolitical risk has rapidly emerged as one of the biggest threats facing the Gulf Cooperation Council countries in recent years. The rise of the Islamic State of Iraq and Levant on one side and political instability in Yemen on the other have added greater urgency to the situation.

To deal with these issues, GCC countries have been bolstering their defence spending. In 2015, Saudi Arabia even replaced Russia as the third biggest military spender in the world, according to a recent report by the Stockholm International Peace Research Institute.

The kingdom’s military spend reached up to $87.2bn last year – nearly double the 2006 total – exacerbated by its year-long war in Yemen, the organisation said.

With keen interest from regional governments to buy the latest in the defence sector, international players are now vying for a piece of the market. And French navy ship manufacturer DCNS already has its foot in the door. The company has been a partner to Saudi Arabia for several years now and supplied several warships to the kingdom. In recent years it has also worked on warship modernisation programmes.

In late 2015, the company also signed an agreement with the King Abdulaziz City for Science and Technology to help develop a research and development centre dedicated to the naval and maritime domain.

“We already have a strategic knowledge sharing agreement with Saudi Arabia and we are keenly looking for stronger partnerships with all the countries in the region, depending on their needs.

“All the countries in the Gulf and the surrounding areas are building and increasing their navies. Some of them already have things in progress, some not yet. So we have our ears and eyes open – we are ready and waiting (to strike deals). I think we are well known in this region,” he adds.

The company currently offers an extensive portfolio of surface warships and submarines. It also provides related services such as transfer of technology, technical assistance and training of crew, engineers and shipyard workers.

“So we are capable of offering all of that to whatever our customer needs and wants us to do,” says Boy.

Owned by the French government, DCNS currently supplies the French Navy fleet and earlier this year delivered to them its latest FREMM frigate ship – the Languedoc – in a colourful ceremony in Toulon. With a huge contingent from the French Navy onboard the 6,000 tonne ship, DCNS took media from the Middle East and Australia (the two key markets it is targeting) on a tour to showcase the vessel’s advanced functionalities.

The FREMM frigate incorporates sophisticated sensors, weapons and communication systems suited for all types of warfare. In fact, the French Navy has also commissioned two of its frigates, Aquitaine and Provence, to join in the United States-led operations against ISIL in the Arabian Gulf.

The navy’s aircraft carrier, Charles De Gaulle, was also part of the operation but is currently back in France for maintenance.

Speaking to Gulf Business onboard the Languedoc, France’s Naval Action Force head Admiral Denis Beraud says: “The French Navy is deployed in all parts of the world and used in application of the French policy and particularly in the fight against Daesh (ISIL) in the Middle East region.”

He adds that the use of ships like the Languedoc would help navies face increasing threats.

“This ship is a good example of technologies used on modern ships with capabilities for different situations – whether against submarines, aircraft or cruise missiles.”

While DCNS attempts to woo Gulf countries, it has already found success with Arab nations in the wider region including Egypt and Morocco.

Egypt has rapidly emerged as one of France’s biggest military customers in recent years. According to reports, the Egyptian parliament even approved a loan of $3.7bn from France in March to fund its arms acquisition. The funds will be used to modernise the Egyptian airforce and navy.

DCNS specifically struck a major deal with Egypt in 2014 for four Gowind 2500 corvettes with an option for a further two more. The contract was reportedly valued at 1 billion euros.

In February 2015, Egypt also placed an order for a FREMM frigate as part of an order reportedly worth around 5.3bn euros which also included 24 Dassault Rafale aircraft and guided weapons. Since Egypt wanted the frigate delivered urgently, DCNS sent the Normandie, which was originally made for the French Navy. Renamed Tahya Misr, the FREMM frigate was delivered in June 2015.

In October last year, Egypt also ordered two Mistral-class projection and command ships from the French ship manufacturer. By 2020, the Egyptian Navy will deploy a fleet of at least seven combat ships designed and built by DCNS.

Exclusively for the corvettes, DCNS entered into a construction technology transfer contract with Egypt. As part of the deal – which entered into force in July 2015 – construction of the first ship will begin within 29 months by DCNS in its shipyard in Lorient. 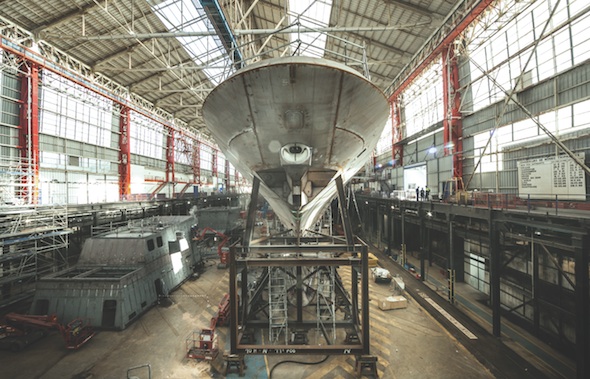 However, the following three units will be built by Egyptian partner Alexandria Shipyard through technology transfer. DCNS will provide training of the Egyptian shipyard staff and also deliver all the technical data and necessary components.

With GCC countries now looking to build knowledge-driven economies and train and employ their local workforces, DCNS believes it is in a position to handle their requirements.

When discussing GCC spending in the current economic environment, the question of low oil prices and its impact is hard to avoid and Boy admits that the issue could influence decisions.

“There is obviously an impact – but it’s a government decision to fix the priorities. Even if there is a global impact on the government’s spending patterns, if priority is given to the navy, then it will not make any difference,” he explains.

“So for us it will not change anything. We will be there, on the ground, ready to answer every need. We also have the capability to adapt our products and offers to the needs of the customer,” he adds.

Would the present market scenario push them to make price concessions to win over competitors?

“It is always challenging and we know that there will always be more competition. But every country has a money concern and they are always very accurate on what they want and what they have to give – we are used to that,” says Boy.

“We always offer our best proposal.”

Deals on the table?

The company remains tightlipped about whether it already has any contracts in the pipeline with the GCC countries.

“It can take years to discuss such deals,” admits Boy. “But right now I don’t have anything concrete to share.

“Any deal begins on a government to government level. It is armament sale, so the French government is always involved in the project – it has to give us the authorisation to sell this kind of military product to any country.

“But after that it’s a direct discussion between DCNS and the navy. We have our part during the negotiations and during the procurement process as well, we deal directly with the navy,” he adds.

Looking ahead, DCNS is looking to boost international revenues from 37 per cent in 2015 to up to 50 per cent by next year. Boy is reluctant to disclose how much of that increase is hoped to come from the Middle East. “But we do hope it will be a big part of that amount, because the Middle East region is really important for us,” he states.

With the region looking for partners rather than vendors, DCNS may find that its proposition proves rather attractive. However, how much focus the GCC will give to strengthening its navy, given its purse strings are tightened, remains to be seen.