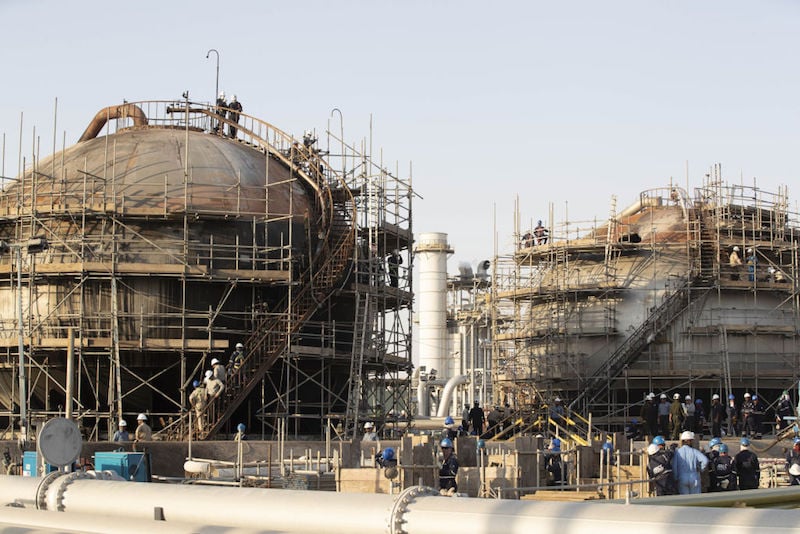 Iran’s key European partners distanced themselves from Tehran amid rising tension with the US, saying the Islamic Republic was responsible for attacks on Saudi oil facilities on September 14 and calling for an expanded deal to constrain the country’s nuclear and missile programmes.

In a joint statement on Monday, France and Germany joined the U.K. in saying Iran was behind the attacks on Saudi Aramco facilities, adding that “no other explanation is plausible.” The statement comes just days after US Secretary of State Michael Pompeo visited Saudi Arabia on what he called a mission to build a coalition to respond to the attacks.

While reiterating their support for the 2015 nuclear accord that President Donald Trump withdrew from last year, the three nations didn’t repeat their past criticism of his decision. Instead, they said, “The moment has come for Iran to accept negotiations on a long-term framework on its nuclear program as well as on regional security, including its ballistic missiles.”

But the message of support for the agreement was muddled when UK Prime Minister Boris Johnson took Trump’s side, saying he saw faults with the existing accord.

“The reality is, as President Trump rightly said, it was a bad deal,” Johnson told NBC News, in remarks recorded before the European partners met. “It had many defects. Iran was and is behaving disruptively in the region. There’s one guy who can do a better deal and one guy who understands how to get a difficult partner like Iran over the line and that is the president. So I hope that there will be a Trump deal.”

It was unclear to what extent the prime minister’s comments reflected a difference of opinion with Germany and France and to what extent he was simply flattering his American host. Johnson’s office later tried to back away from his words, insisting he continued to support the existing nuclear accord.

Jarrett Blanc, a former coordinator on the nuclear deal under President Barack Obama and now a senior fellow at the Carnegie Endowment for International Peace, said it was hard to decipher the conflicting comments.

“This is not a clear message,” he said. “The Europeans have sought negotiations with Iran on these issues before. But clearly they’re trying to send a message to link everything together and tie it to this attack.”

Either way, the statement was a diplomatic victory for the US. Brian Hook, the American special representative for Iran, said “we were very pleased” when asked about the comments.

After Trump pulled the US out of the nuclear agreement, the UK, France and Germany tried to help the Iranians find a way around renewed and expanded US sanctions, seeking to create an alternative financial mechanism to facilitate trade.

The nuclear agreement was long criticized by Trump and his aides for not doing more to address Iran’s ballistic missiles and “malign” behaviour in the region, from Syria to Yemen. Trump and Iranian President Hassan Rouhani are in New York this week, though both sides have effectively ruled out a meeting to help lower tensions following the Aramco strike, the shooting down of an American drone and a spate of attacks on oil tankers earlier this year.

French President Emmanuel Macron met with Rouhani for two hours on Monday and told him, according to Macron’s office, that defusing the crisis was narrowly possible but that the Iranians had to act. Rouhani responded that he was willing to work with the three European countries, and to discuss the civil war in Yemen and other security issues, the French president’s office said.

Trump last week ordered a modest increase of US forces in the Persian Gulf region. Iranian officials have repeatedly rejected involvement in the Aramco attack and Zarif has warned that a military strike on Iran by Saudi or US forces would turn into “all-out war.”

The American president addresses the UN General Assembly this morning and will likely discuss the situation with Iran. Rouhani is scheduled to speak to the global body on Wednesday.